Hongmen - Archaeologists have started an underwater detection project after villagers in eastern China's Jiangxi Province found the head of a Buddha statue emerging from the surface of a local reservoir. The head was spotted at Hongmen Reservoir, Nancheng County in the city of Fuzhou, at the end of last year when a hydropower gate renovation project lowered water levels in the reservoir by more than 10 meters. Judging from the head design, the statue was carved during the Ming Dynasty (1368-1644), said Xu Changqing, head of the provincial research institute of archaeology. He said that the researchers had also found rectangular holes carved on the cliff, obvious marks of architecture, which meant that a temple could have existed there. Sonar equipment and other devices will be used to get the basic data and underwater images for further research. Hongmen Reservoir, also known as Zuixian Lake, was built in 1958. According to county records, the reservoir is located on the ruins of the ancient Xiaoshi Township, an important hub for water transport between provinces of Jiangxi and Fujian and also a trade center.

CHINE - Chenzhou - Archaeologists in central China's Hunan Province said Monday that they had recently discovered an ancient tomb, with a fresco depicting two maids, that could date back over 1,400 years. Luo Shengqiang, an expert with the city's cultural relic department, said that based on funerary items found in the 14-meter long and 2-meter wide tomb, in a village under Suxian District of Chenzhou City, it was believed to be built in the Southern and Northern Dynasties (420-589). In clean and smooth lines, the colored fresco on the tomb wall depicts two maids standing wearing similar long skirts and coats with open collars exposing their shoulders. "This is the oldest fresco tomb discovered in Hunan. It is rare to see in southern China," said Luo, adding that the fresco could contribute to the study of China's clothing history. 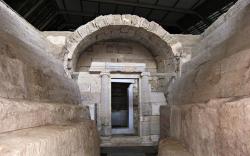 Dervini - The marble door that once sealed its entrance is on display at the Istanbul Archaeology Museums, the most striking find made by Greek Ottoman-era archaeologist Theodore Makridi during his excavations of a tomb in Derveni, near Thessaloniki, two years before the northern Greek port city was liberated. The double-chambered barrel-vaulted tomb is among the greatest discoveries in the area and has been associated with Lete, one of the greatest cities of the ancient Kingdom of Macedonia. Nevertheless, it lay almost completely abandoned for over a century. The elements did their worst and this beautiful historic structure was at the point of collapse in 2011, when it was finally slated for restoration and protection under the European Union structural funds program for 2007–2013, with a budget of 1.2 million euros. Work on the site commenced in 2012 and now the Tomb of Makridi Bey, as it is known, constitutes one of the highlights of Thessaloniki’s historic sites . Dated to between the late 4th and early 3rd century BC, with a monumental facade in the Ionic rhythm and a marble sarcophagus in the death chamber, the tomb is a splendid sample of architecture and burial rites, as well as evidence of the incredible wealth that poured into the Kingdom of Macedonia with the return of Alexander the Great’s army from its Eastern campaign. “When we took over, the condition of the tomb was lamentable. The structure was distorted and the antechamber had settled onto the scaffolding that had propped it up since 1997,” says architect and restorer Fani Athansiou.

Cambridge - Anglo-Saxon artefacts dating back almost 1,500 years have been unearthed during the excavation of a site earmarked for new houses. The site, located on the corner of Hatherdene Close and Coldhams Lane, next to the city airport, appears to have been the location of a sixth-century settlement, predating the Middle Saxon settlement in nearby Church End. A range of rare artefacts have been found during routine digging for the development, including brooches, multi-coloured glass and amber beads, rings, and hairpins, along with more functional equipment such as small knives, pottery, and weaponry including spear heads and shield bosses. One of the most important findings from the site is a virtually intact glass drinking vessel known as a “claw beaker”. These items, often found in Anglo-Saxon graves, are not normally found outside of Kent and the south of England, and were produced in northern France, the Netherlands, and Germany. The excavation also revealed a web of late Iron Age ditches defining a field system, suggesting that the settlement may even be Roman in origin. Central Cambridge was settled in approximately AD 70 by the Romans, who established a small fort on Castle Hill. By Anglo-Saxon times, however, the settlement had fallen into decline, and was described by the eighth-century monk and chronicler Bede as  a “little ruined city”.