Honolulu - A fierce sperm whale sank the first whaling ship under George Pollard's command and inspired the classic American novel "Moby-Dick". A mere two years later, a second whaler captained by Pollard struck a coral reef during a night storm and sank in shallow water. Marine archaeologists scouring remote atolls 600 miles northwest of Honolulu have found the wreck site of Pollard's second vessel — the Two Brothers — which went down in 1823. Most of the wooden Nantucket whaling ship disintegrated in Hawaii's warm waters in the nearly two centuries since. But researchers found several harpoons, a hook used to strip whales of their blubber, and try pots or large cauldrons whalers used to turn whale blubber into oil. Corals have grown around and on top of many of the objects, swallowing them into the reef. The sinking of the Two Brothers was relatively uneventful compared to the Essex's epic run-in with the whale. After the Essex capsized, Pollard and fellow crew members drifted at sea without food and water for three months before they were rescued. To survive, Pollard and others resorted to cannibalism, including eating one of the captain's cousins. Still, Thomas Nickerson, a crew member who served under Pollard both on the Essex and the Two Brothers, later described his boss as being in a daze as they had to abandon ship for the second time. "Capt. pollard (sic) reluctantly got into the boat just as they were about Shove off from the Ship," he wrote. Fortunately, the Two Brothers was sailing with a fellow whaling ship, the Martha, which had taken shelter near a rock. When the sun rose, the 20 or so crew members of the Two Brothers rowed over to the Martha which picked them up. They all survived. Pollard gave up whaling, though he was just in his mid-30s, and returned to Nantucket, Mass., where he became a night watchman — a position of considerably lower status in the whaling town than captain. While the sperm whale attack inspired Melville to write "Moby-Dick," the author isn't believed to have used Pollard as the basis for the book's notorious Capt. Ahab. Melville actually didn't meet Pollard until about a year after his novel was published, some three decades after Two Brothers sank. Philbrick said the meeting left a strong impression on the author, whose creation hadn't been an immediate critical or commercial success.

- TIMOR ORIENTAL  - Lene Hara – A team of Australian scientists has stumbled upon ancient stone carvings in an East Timorese cave dating back at least 10,000 years. The findings, just published in the journal Antiquity, follow the discovery in the Lene Hara cave in May 2009. The team of archaeologists and palaeontologists had been looking for the fossilised remains of extinct giant rats. But the CSIRO's Dr Ken Aplin accidentally saw the stylised face carvings in the limestone roof. "One of our East Timorese colleagues was sitting up on top of a big block of limestone and I looked up to see what he was up to and as I did, my head-torch shone across the face of the limestone and I saw these incredible faces engraved on the surface," he said. "I called out to Sue, the archaeologist, 'Sue - you didn't tell me there were faces engraved here' and she said 'there aren't any' and I went 'come and have a look at this' and her mouth fell open when she saw them." The Lene Hara carvings, or petroglyphs, are frontal, stylised faces each with eyes, a nose and a mouth. One has a circular headdress with rays that frame the face. Although stylised engravings of faces occur throughout Melanesia, Australia and the Pacific, the Lene Hara petroglyphs are the only examples that have been dated to the Pleistocene. No other petroglyphs of faces are known to exist anywhere on the island of Timor. 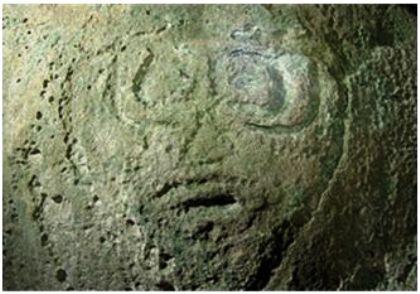 The Lene Hara petroglyphs are the only examples that have been dated to the Pleistocene. (CSIRO: John Brush) 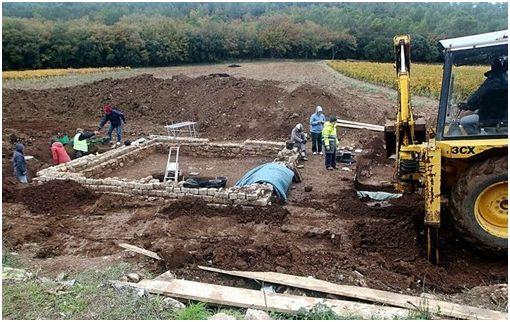 - USA – Rosebud - The restoration of a cemetery for plantation slaves may have led to the discovery of the grave of a pioneering Texas Ranger who died 174 years ago after an attack by Native Americans. Anthropologists from the Smithsonian Institution joined researchers from the Texas Historical Commission on Thursday to excavate the grave and retrieve remains that will be tested to see if they belong to James Coryell, one of the earliest members of the iconic law enforcement group. "The question is whether they are well-preserved enough to get DNA," said Jim Bruseth, archaeology division director for the Texas Historical Commission. "We're also wondering if he was scalped and if maybe there is some evidence of that on his cranium." Coryell and three others were raiding a beehive for honey on May 27, 1837, when they were ambushed by Caddo Indians. His friends escaped, but Coryell was shot and wounded and may have been scalped. He apparently survived the immediate attack and received some sort of care but died within days. Researchers hope DNA tests will confirm the remains belong to Coryell, and their work will provide answers about he died. One thing that's not known is whether Coryell was shot with a gun or an arrow. The precise location of Coryell's grave got lost over generations but a 1936 book about the history of the county named for him noted a former slave had said slaves who died at a Falls County plantation were buried near his grave. The former slave also said slaves put rocks on the Ranger's grave after it collapsed to keep his spirit at rest. On Thursday, researchers climbed into a 6-foot-deep hole they've been digging for several days and used hand tools to painstakingly fill plastic buckets with dirt. A wood-roofed and plastic-walled enclosure protected the site from the elements. The researchers were digging within inches of where they expected to find bones, and it was clear someone had been buried there in a wooden coffin. The wood long had deteriorated, but researchers collected numerous iron coffin nails in large framed screens used to sift the dirt. Coryell had had an eventful life by the time he died about the age of 40. Born near West Union, Ohio, Coryell left home at 18 for New Orleans and then moved on to San Antonio — where he met the famous Bowie brothers. Rezin Bowie took credit for designing the huge knife carried by his brother James, who was among the Texans killed at the Alamo. Coryell and the Bowies were hunting for a precious metals mine when they ran into Indians and achieved notoriety for surviving a battle where they were far outnumbered. The Ranger also is credited for organizing a retreat of about 200 Central Texas residents from the advancing Mexican army in 1936. After the Mexicans were routed by Sam Houston's army in the famous Battle of San Jacinto, Coryell signed on with a volunteer force. The term "Texas Ranger" wouldn't appear until later in the 19th century, according to the Texas Ranger Hall of Fame and Museum in Waco. Coryell explored what is now his namesake county and supposedly was to head west to scout for land when he was killed.

- ROYAUME-UNI – Guernesey - A Guernsey States Archaeologist says not enough has been done to investigate the island's only known Bronze Age settlement - on the site of the Island's airport runway development. The unique site could be disturbed and ultimately covered up by the development. Although a small dig has taken place there, Archaeologist Philip de Jersey believes a full geo-physical survey is needed. But he has been turned down for funding, despite the cost being only a fraction of that of the total runway project. Philip said: "It would be very frustrating from an archaeological point of view if it wasn't comprehensively investigated before development. "I mean that is true whether it's someone building a garden shed or whether it's a big project like this. If there is archaeology there you know you only get one chance to look at it basically."