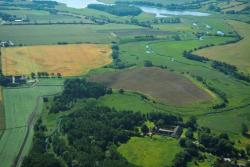 Gammelborg - Aerial photos have revealed the location of Gammelborg, the Iron Age fort that was replaced by Nyborg Castle in Funen over 800 years ago. The long-standing mystery was solved when the aerial photos revealed circle-shaped mounds near the village of Vindinge, just outside Nyborg, prompting archaeologists from Østfyns Museer to dig in the area. ”Vindinge was an infrastructural centre of the kingdom with easy access to the sea by the exit of Funen's most water-rich stream,” Janus Møller Jensen, the inspector from Østfyns Museer, said in a statement. ”The discovery and dating of Gammelborg near Vindinge make the hypothesis that we had a royal centre in east Funen – long before Nyborg Castle was established at the end of the 1100's – far more likely.” Carbon-14 testing of the digs showed traces of a palisade (a defensive structure made of wood) dating back to the late Iron Age in the 5th and 6th century. The results also showed that the fort was used during the Viking era. There were no traces found within the mounds of the structure that indicated that the fort was used as a place of refuge, such as when enemies were attacking. Additionally, the find suggests that Vindinge was an important town during the Viking era, in terms of trade and power. 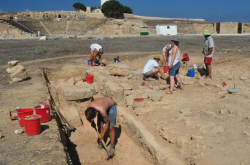 Nea Paphos - A team from Krakow’s Jagiellonian University that has been excavating the ancient city of Nea Paphos in Cyprus believes it has discovered the heart of the settlement. The team led by Professor Ewdoksia Papuci-Wladyka from the university’s Institute of Archaeology, has now been working on the site for four seasons and excavations are still ongoing. “Our most important discoveries this year were two large public buildings in the [ancient] city’s centre,'' Professor Ewdoksia Papuci-Wladyka commented. ''One of them is undoubtedly a shrine, while the second is thought to have been used as a warehouse,” she said. The professor noted that these buildings were always located near the Agora, the term used to describe the central area of Greek cities. The team has also located an ancient well near the eastern entrance to the Agora, which was later used as a bin by the inhabitants. The well was found to contain broken dishes, fragments of figurines and coins from the Hellenistic period. According to Greek mythology the goddess of love Aphrodite was born in the seas around Nea Paphos. The town has been inscribed onto UNESCO’s list of world heritage sites. 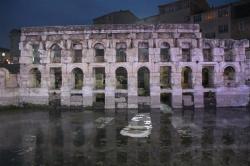 Sarıkaya -An ancient bath in the Central Anatolian province of Yozgat’s Sarıkaya district is one of the rare early Roman-era artifacts that still survive. The bath, called Basilica Therma, was a thermal center in the Roman era. Yozgat Governor Abdulkadir Yazıcı said the bath is a significant historical artifact for Turkey. “This place was also a center from where the eastern part of the empire was administered. Roman soldiers used this place to take a rest before setting sail,” Yazıcı said. He said the figure of a snake “sticking out its tongue” in the Roman bath was the one and only of its kind among other Roman-era artifacts, representing a symbol of health and medicine. “Thermal sources all around the country were used in the Roman era and thermal baths were built over some of them. The Sarıkaya bath is one of the rare thermal baths from the Roman era in Anatolia. In this structure, the hot water was sourced and used directly from underground. According to findings revealed during the excavations, hot water was used in some parts of the structure as a floor heating system. The buildings which stand in front of the historical structure have been expropriated and removed by the Culture and Tourism Ministry, while some parts of the structure are still underground.  Then the big pool was unearthed,” Yazıcı added.  The governor said the excavations in the Roman bath also revealed unused pools from the Seljuk and Ottoman eras. “The unique characteristic of the Sarıkaya bath is that water is still coming to the surface. Such baths are rare even in Europe. As we excavated, we found an Olympic-sized pool. A section was unearthed in the center of it; it was probably used as a baptism stone. Two other pools were also found in two different places. Work is continuing here; we are waiting for the relief and restoration projects to be prepared by the Yozgat Museum Directorate. After a rough cleaning, we will apply to academics for the more detailed work,” Yazıcı said. “We are working to protect this world heritage location. The Sarıkaya Roman bath was a thermal treatment center in ancient ages. The friezes in the top part of the structure depict a bull head figure and snake figures. The snake figure is the symbol of Asklepios, the god of medicine and health in mythology,” he added.

Nazca - Aerial photos reveal damage that occurred meters away from the Nazca lines, as fingers point towards Greenpeace activists who set up an enormous climate change banner yesterday morning along side the historical landmark.On their facebook page, Greenpeace International states, “We can assure you that absolutely NO damage was done. The message was written in cloth letters that laid on the ground without touching the Nazca lines.

Taj Mahal - The Taj Mahal's iconic marble dome and soaring minarets require regular cleaning to maintain their dazzling appearance, and scientists now know why. Researchers from the United States and India are pointing the finger at airborne carbon particles and dust for giving the gleaming white landmark a brownish cast. Knowing the culprits in the discoloration is just the first step in cleaning up the Taj Mahal. Scientists now must determine where the particles are coming from to develop strategies for controlling them.

INDE - Sidhpur - Remnants of a Shiva temple having two shrines were found during an excavation carried out at Jami Masjid mosque and its adjacent areas in Gujarat about 35 years ago, the government informed the Rajya Sabha today. Replying to a question whether two ancient Shiva temples were traced in Jami Masjid at Sidhpur district in Gujarat between May, 1979 and April, 1980 in Rajya Sabha, Minister of State for Culture Mahesh Sharma said that "while exposing parts of mosque and adjacent area after removal of modern buildings, the remnants of a Shiva temple having two shrines were found." On the details of scientific excavations carried out at the archaeological monuments of Rudramahalaya and Jami Masjid at Sidhpur district of Patan in Gujarat during the same period, he said plinth of the temple was exposed and sculptures, architectural members, decorative mouldings were found after scientific excavations. To a question on the present status of planning and development for clearance operations, preservation of ruins of Rudramahalaya and Jami Masjid, he said that in the clearance operations, modern buildings adjacent to Jami Masjid, obstructing the view of these monuments, have been removed. The works attended includes clearance of debris, pathways, stone paving around Torana and construction of compound wall, he added.