Phnom Kulen  - The five-week excavation within the Phnom Kulen National Park focused on a specific building within a 400-metre-by-600-metre site believed to be the palace compound of Jayavarman II. It was first identified in 2009, said Jean-Baptiste Chevance, the program director of the NGO Archaeology and Development Foundation. "The first investigation was precisely on that building in 2009 and the second was the Lidar survey in 2012, which confirmed that the site in itself was [likely] the royal palace," he said, referring to a remote sensing method that can reveal ground features otherwise hidden by vegetation. "We are interested in the way it was constructed and the way it was used." The square building is surrounded by a series of concentric walls and pavements with an eastern facing entrance. Radio-carbon dating from previous digs, he continued, show that the building was abandoned at the end of the ninth century, corresponding with accounts from stone inscriptions that Jayavarman II built his capital atop Kulen Mountain at the end of the eighth and start of the ninth century after unifying fractured Cambodian kingdoms into one empire and establishing his rule by divine right. "This settlement [and] this huge enclosure [the royal palace compound] is very organised and was occupied for a short time during the ninth century," he said, noting that the reasons for residents abandoning the capital is a larger research focus of the project. The compound's "massive" size, its shape and its positioning within the larger urban grid discovered by LIDAR surveys suggest to Chevance that it was indeed the royal palace, though no inscriptions at the site as of yet provide any clues. 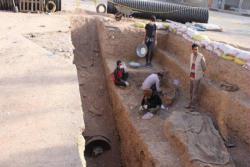 Andimeshk - The first archeological exploration season conducted in the neighborhood of the Water and Sewage Company of Andimeshk, Khuzestan Province, led to the discovery of graves dating back to the Islamic and Parthian era. Based on the initial results of the exploration, the location had been used at least in two Islamic and Parthian eras as a place for burial, he said, adding that graves from both the periods have been explored in the current season. The archaeologists noted that old images show that at least over the past 40 to 50 years there had been a possible settlement in the shape of a hill near the location of which no trace is remaining today. The archeologist added that in the current season interdisciplinary studies, such as geomorphology and osteology archaeology have been conducted beside archeology the result of which will render great help to collect accurate information about the past of Andimeshk

Apollonia Pontica - A dwelling dating to the sixth century B.C. has been discovered in the ancient Greek colony of Apollonia Pontica, located on the Skamni Peninsula of Bulgaria’s Black Sea coast. Among the artifacts in the house, archaeologists found a krater decorated with red figures depicting the myth of Oedipus and the Sphinx, and an askos, or small jug, for pouring small amounts of liquids. The site was situated about six feet underneath the foundations of a home built in the nineteenth century. Layers of soil in between the two homes contained Classical Period artifacts such as pottery, loom weights, spindle parts, coins, seals, and game pieces, and a medieval necropolis in use during the eleventh century and the thirteenth and fourteenth centuries. One of the eleventh-century graves yielded a small cross made of bronze and one made of bone.

Dwarkapur-Agiyabeer  - A team from BHU has unearthed a town thousands of years old near Dwarkapur-Agiyabeer villages of Uttar Pradesh. The settlement, discovered during an archaeological excavation by a team of the ancient Indian history culture and archaeology departments of the university, is estimated to be almost 3,500-4,000 years old. The team found weapons made of bones, mud sculptures, remains of floors and utensils. In fact, evidence suggests the town was a settlement of fishermen."Evidence of two cultures has been found - Iron-Stone Age and Copper-Stone Age. Equipment made out of iron, spears, parts of swords, axes have been found. Beads used for beautification have also been found," shared director Dr Ashok Kumar Singh.