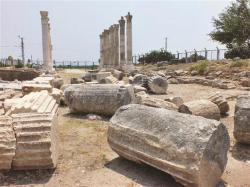 Soli Pompeiopolis - With a historical heritage dating back to the ancient age, the Soli Pompeiopolis site in the southern province of Mersin will soon be explored from under the Mediterranean, in addition to ongoing excavation work on land. Located in the Mezitli district, the 3,000-year-old ancient site’s excavation work has been carried out above ground since 1999. However, upon the instruction of Mezitli Mayor Neşet Tarhan, a Selçuk University Underwater Archaeology research vessel will be working in cooperation with UNESCO to integrate the Soli Pompeiopolis site to its field work next summer, in an attempt to extract more artifacts. The site has been acknowledged as one of the key ports of the Roman era, dating back to the second century B.C., with its 200 pillars between two entrances towards the north and south.  Professor Remzi Yağcı, the head of the excavation, said the site had been submerged under the waters of the Mediterranean after an earthquake in 525 A.D. According to Yağçı, Soli had hosted many lagans since its construction. Researchers presume the Soli port was founded by Rhodes pirates who crossed into Anatolia through Cyprus in 700 B.C. Soli was later seized by the Roman Empire in 78 B.C., and was named Soli Pompeiopolis after the Commander Pompei.

INDE – Bhagatrav - Gandhinagar has discovered some rich remains of the Harappan civilization and medieval period in Bhagatrav, an archaeological site in Hansot taluka of Bharuch district in Gujarat. The team has found a respectable number of lead pieces, many geological samples having rich iron contents, stone beads, evidences of production of glazed ware (pottery) in Bhagatrav. The discoverer of the site, late S R Rao, had hypothesized the site to be a port site, contemporary to Lothal. The excavation, carried out from April 7 to May 24, was in association with Gujarat state archaeology and partially funded by Archaeological Survey of India. "We have excavated numbers of leads which were probably used to make surma during the Indus Valley Civilization and as alloy in metal production," said Dr Alok Kumar Kanungo, excavation director of the site and assistant research professor (archaeology), IIT-Gn. He said: "The team also discovered stone beads and glazed ware crafts that were probably traded to parts of coastal regions." Dr Kanungo said it will be interesting to work on the relationship of present day Khambat and this site of Bhagatrav on the basis of the finds, cultural sequence and contacts of Harappan people with the rest of the world . 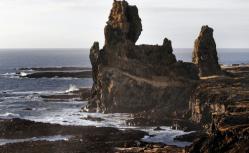 Snæfellsnes - Cave explorers in the Neshraun lava field on Snæfellsnes peninsula recently discovered a cave with archaeological remains which are believed to be 900 year old. The cave was discovered last winter, but is only now that it‘s existence has been revealed to the public. It‘s location, however, remains secret to protect the remains while they are being investigated. The cave was found to contain a small hearth, bones from a horse and other remains, including what archaeologists believe is a bed. Analysis by the Cultural Heritage Agency of Iceland indicates the remains are from the 11th or 12th centuries. Magnús A. Sigurðsson, the Cultural heritage manager for West Iceland, told RÚV that the cave was most likely occupied by an outlaw, or someone trying to hide. Adolf Friðrkisson, an archaeologists, told the Icelandic National Broadcasting Service that the discovery was unique and that it was very difficult to explain the remains. Written records seem to be of little if any use, and no similar remains have previously been found. The presence of horse bones only adds to the mystery. The cave‘s occupant seems to have cooked horse meat while occupying the cave. Adolf points out that this very interesting, since the consumption of hose meat had been forbidden by law since Iceland adopted Christianity in the year 1000. “Actually, if you explore evidence provided by archaeology it seems to have been very unusual for people to consume horse meat, both before and after the adoption of Christianity. The cave dweller certainly kept his consumption of horse meat a secret.” Archaeologists plan to explore the cave this September.