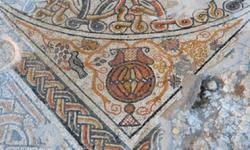 Kibbutz Beit Kama - A 1500 year old Byzantine era mosaic floor was discovered under the fields of Kibbutz Beit Kama in the Negev, the Antiquities Authority announced on Sunday. The mosaic was discovered by the authority prior to the imminent paving of the southern extension of Highway 6, the Trans-Israel Highway.  The red, black, and yellow mosaic has images of birds, geometrical shapes, and different types of local flora.  The mosaic was discovered along with a group of structures, pools and a system to move water in a rescue dig that the Authority was carrying out prior to the paving of the highway, Israel Radio reported. The radio quoted the Antiquity Authority's southern district archaeologist, Yigal Yisrael, who said that the mosaic was preserved almost in its entirety despite lying just below the soil of the kibbutz's fields. 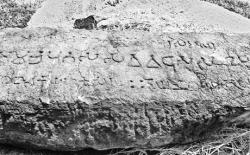 SRI LANKA – Kuragala - The Director General of Archaeology Senerath Dissanayaka told the SLBC that many archaeologically important artifacts and information have been found from excavations carried out in the Kuragala area. He said that it was possible to find many information relating to the Balangoda man and the era before his existence. He said that information on many animals that have perished has also been discovered. Mr. Dissanayaka said that excavations so far have been carried out only for about one meter deep and further excavations will be carried out in this area. He said, that evidence have been found that elephants and other animals as well as sea crabs also had lived in this period. The Director General of Archaeology told the SLBC that a skeleton belonging to the pre-historic area has also been discovered. 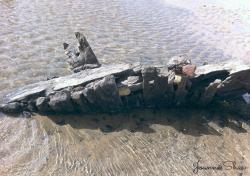 Hartlepool - A dog walker is “shocked and excited” after discovering a wooden structure on a Hartlepool beach which is almost certainly the remains of a rare shipwreck. Joanne Shaw was taking her daily walk along Seaton Carew beach with her dog when she came across the wooden relic poking from beneath the sand opposite the dunes. Joanne Grahame, an archaeologist with Tees Archaeology, told the Mail that she is “99 per cent sure” that the structure is previously unrecorded and is hoping to get down to the site when the tide is low enough to check it out. Joanne’s initial opinion is that the ship was wrecked in the area where it now lies, possibly in the 19th Century, around 1850, when Hartlepool was developing as a port and had a number of boats going back and forth. She said a specialist will have to look at the boat to see how it has been constructed to try to establish an exact date and potentially a name, which can then be linked to newspaper reports or records of ships that were wrecked or berthed around that time and whether or not the crew survived.

Haverhill - An archaeological dig on the site of what will become the Haverhill Research Park has revealed traces of activity from the Iron Age through to the 1840s.  An Anglo Saxon hall and several pieces of jewellery were also found during the excavation, which covered 4.5 hectares. James Newboult, archaeological project manager, said the findings would be analysed and recorded to preserve the history of the site. The farmstead dates back to the "first or second centuries", he said. "It's made up of a series of enclosures. Where today we use fences or bricks to define our areas, they use ditches and banks. "It's what we call a cellular enclosure. People would have lived there, kept animals, and farmed their crops."