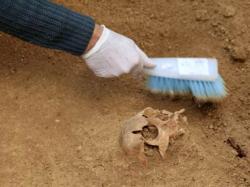 Madugula - A team of archaeologists and historians have discovered remnants of Iron Age and Satavahana era from Mahabubnagar district of Andhra Pradesh. A series of 20 megalithic burial cairn circles have been reported on a hillock in Madugula village of Mahabubnagar region yesterday, AP Archaeology and Museums. The burials are encircled by 14 to 20 huge boulders, in which, the actual cist burials are topped by a huge capstone that are datable to 1000 BC. The team, in its explorations, discovered a huge Satavahana site in an extent of 100 acres, littered with bricks, brick bats, red polished ware (pottery of different sizes), shell bangle pieces, iron slogs and stone millers, datable to 1st century BC to 2nd century AD on the north-east corner of the village, he said. “An earthen rampart with a moat is also noticed, confirming it as a Satavahana fortified settlement. The scientific clearance of the site may yield valuable material culture of the Satavahanas,” Chenna Reddy said. The team also explored another two megalithic sites, located at Irwin and Charagonda in the district, wherein, about a hundred cairn circles were discovered by the team that are datable to 1000 BC, he said. Sivanagi Reddy said this discovery of Iron Age and Satavahana era is the first time in Mahabubnagar, while similar discoveries were earlier made at two other locations, including in Khammam district.

Bihar - The Archaelogical Survey of India (ASI) is set to begin excavation of a newly-found ancient stupa that was badly damaged and has been lying neglected for centuries in Bihar's Begusarai district. The Patna circle of the ASI has identified the location of the stupa at Harsai near Garhpura village. Archeaologists here believe that it could be one of the eight original stupas built to house the relics of Lord Buddha. "Going by the physical appearance of the stupa and the use of mud lumps denotes that it could be one of the eight original stupas housing the Buddha's corporeal relics. But that can be determined only after excavation," the superintending archaeologist of ASI (Patna circle) S K Manjul said. According to ancient scriptures, after the Buddha was cremated, there was a disagreement over the division of his remains. They were then divided into eight parts and distributed among the eight powerful kingdoms and republics, which laid claim over them. All of them buried their share of relics in stupas specially built to serve as markers of the physical presence of the Buddha and his teachings. Till date archaeologists have identified six of them. "If this stupa turned to be seventh, it can be the ASI's biggest discovery," he said.

Marsa - Roadwork excavations in Marsa have revealed the archaeological remains of a Muslim cemetery dating back to 1675, confirming historians’ belief of the existence of a Turkish slave cemetery in the area. The two archaeologists pointed to the trench’s north wall – a sheer face some five metres high with scree and other rock debris at its foot – and said they had been asked by health and safety authorities to avoid working on it for the time being. Initial indications are that the remains are part of the burial ground granted to the Muslim slave community by Grand Master Niccolo Cotoner in 1675. The cemetery replaced an older one that had been destroyed by the Knights to make way for the Floriana fortifications. Slavery in Malta ended with Napoleon’s arrival in 1800 but the cemetery continued to serve as a Muslim burial place until the middle of that century, according to historian Godfrey Wettinger. In 1874, Malta’s Muslim cemetery was transferred to another Marsa site very close to existing one in the area commonly known as Iċ-Ċimiterju tat-Torok (The Turkish Cemetery). The human remains are oriented south-eastwards, facing Mecca. As is customary in a Muslim burial place, those laid to rest appear to have been buried with no accompanying relics or artefacts. Some historians had also floated the suggestion that the remains could be part of a makeshift cemetery built by the Ottomans during the Great Siege of 1565. The Ottomans had chosen to situate their base camp at Marsa throughout the three months of the siege. But the two archaeologists working yesterday thought the hypothesis unlikely. Carbon dating will determine how old the remains are, confirming or rejecting the existing hypothesis that they belong to a Knight-era cemetery. DNA tests, which archaeology professor Anthony Bonanno described as “a very complex and complicated process”, could be used to help determine the remains’ origin.

- Clarke County - The site of a possible Paleo-Indian solstice site recently discovered in Clarke County, Virginia gained new interest among members and guests who attended the Northern Virginia Chapter of the Archeological Society of Virginia (NVCASV) during its monthly meeting in January. Lead archaeologist for the site, Jack Hranicky, announced new findings to including what Hranicky believes are stone art carvings located in rocks near the area of the initial discovery. A new major feature is a shelter on the site that contains Indian rockart including A set of geometric ‘glyphs’ and two sets of right-hand prints. “Glyphs” or petroglyphs, are rock engravings created by removing part of a rock surface with carving, picking, incising or abrading. The human hand is one of the most common rockart elements found around the world. Petroglyphs are found worldwide, but few are found in Virginia. There are 17 known rockart sites in Virginia, all recorded by Hrankicy. Hranicky has two other rockart sites containing concentric rings, altar and hand glyphs. Hranicky believes that the Clarke County Spout-Run complex pre-dates all of his previous discoveries. 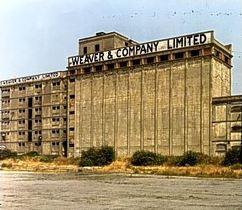 Swansea - After closure in 1963, the derelict Weaver's Flour Mill was either an important piece of industrial archaeology or a dreadful eyesore on the eastern approach to Swansea. This multi-storey ferro-concrete building, described succinctly as 'the ugly tall building in Quay Parade', survived aerial wartime bombardment, and some felt that it would stand for ever. Nevertheless with much difficulty Weaver's was demolished in early 1984 to make way for Sainsbury's supermarket. Weaver and Company had been founded in 1892, importing wheat to produce flour for distributing to bakeries over a wide area. The firm occupied adjoining buildings around the one-acre Beaufort Basin off Swansea's North Dock, but as the business expanded a new mill and silos were needed. French engineer François Hennebique had patented a ferro-concrete construction system, and his British agent Mouchel had an office in Briton Ferry. The agent knew John Aeron Thomas, a director of Weaver's and mayor of Swansea in 1897, and following a visit to France to see ferro-concrete construction, the new Weaver's building was constructed with the Hennebique method. When opened in August 1898 beside the half-tide basin that linked the North Dock to the river, the Victoria Flour Mills was the first ferro-concrete building in Europe. The mill was six storeys high, with a reservoir on the roof that could hold 20,000 gallons of water. The North Dock closed in 1928, but its basin remained open for vessels going to and from Weaver's. Although the construction is often described as reinforced concrete, it was a combination of concrete and steel in order to utilise the strengths of each material. One prominent example is the tall Royal Liver Building in Liverpool.