CHINE - Jingtoushan - Archaeologists in east China's Zhejiang Province said Saturday they have discovered a prehistoric shell mound of 8,000 years old at the site of Jingtoushan ruins in the province. Jingtoushan ruins in the city of Yuyao administered by Ningbo city were discovered during a drilling survey for factory construction in 2013. Archaeologists later identified the site as the earliest and most deeply buried shell mound site in the coastal areas of China. Tests by the carbon-14 lab of Peking University concluded that the site was between 7,800 and 8,300 years old -- 1,000 years earlier than the city's Hemudu culture ruins, which are believed to be the origin of humanity in Ningbo. A large number of exquisite artifacts such as pottery, stone tools, wood, bone and shellfish, and the remains of early rice cultivation, as well as abundant aquatic, terrestrial plants and animals remains have been unearthed since the digging began in September of 2019.

Verone - It’s not every day that scholars unearth an ancient Roman mosaic floor, but that’s exactly what happened this week. Officials from Negrar di Valpolicella of Verona, Italy issued a statement to Facebook revealing the discovery beneath a vineyard. Initially found by scholars more than a century ago, parts of the flooring and foundation of a Roman villa were finally uncovered after “countless decades of failed attempts”—and it was perfectly preserved. Tafresh - “Tarkhoran troglodytic architecture is a sample of local subterranean construction which is situated in the modern neighborhood of the same name,” CHTN quoted Rahmati as saying. The first phase yielded the discovery of urban spaces in three stories that were connected by passageways, he noted.  Some 4,500 pieces of potteries and glazed tiles, dating back to a period between the 5th and 10th centuries BC, were also unearthed during the first round of excavation, he explained. Based on the academic findings, the creation of handmade troglodytic architectural sites depends on several factors including climatic and geographical conditions, defense, security, durability, and religion, which were deeply tied with the cultural, political, social and economic circumstances. This architecture can be classified in various formal types in terms of their external form, internal space, and function (religious, tombs, residential, and shelter). Such tight labyrinthine underground “cities”, which were used as defensive shelters in wartime, still boast lots of charms as destinations for domestic and foreign travelers, the official noted. The handmade troglodytic architecture is a distinctive kind of architecture, which does not require major construction materials and consequently very low environmental load since its creation is majorly by extraction of space rather than the addition of mass. The Architecture by subtraction rather than addition provides many opportunities that call for comprehensive research and analysis. As there is no obligatory method in making spaces rather than material cohesion, there is no priority in constructing a troglodytic structure, either from the roof or from the floor. Dealing with stone blocks, rocks, and piles of earth requires a variety of tools as an ax, hammer, chisel, and sledgehammer to shape the interior space. In Iran, many magnificent cases of this architecture have taken place in different regions due to its various climates. This unique architecture is at odds with the conventional settlement patterns and construction methods and is always can take advantage of the mountains and valleys on the floor or wall, which is a good way to control climate fluctuation in different regions.

MALTE - Saqqajja - Shards of pottery and other archeologically significant materials were discovered in Rabat on Friday following an inspection by the Superintendence of Cultural Heritage on emergency roadworks in Saqqajja Hill. The areas around Rabat and Mdina are known to be culturally sensitive and rife with undiscovered remains, having been built upon an ancient Roman city named Melite. “The Superintendence of Cultural Heritage is well aware that the site’s archaeological potential is extremely high. The site in question is well within the confines of the Punico-Roman ancient city of Melite, which is mentioned in ancient Roman texts,” Superintendent of Cultural Heritage Joseph Magro Conti said. “The present Rabat and Mdina formed the city of Melite and its necropolis (burial grounds), therefore were scheduled as an Area of Archaeological Importance and protected by Maltese law. The site of the collapse is also close to other significant archaeological remains, including a Roman domus (bath house) as well as a bath complex with a floor supported on upturned wine amphorae close to the Saqqajja petrol station. 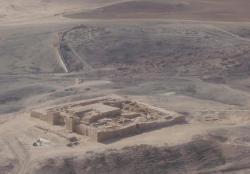 Tell Arad - Researchers studying two altars from an ancient shrine in Israel have discovered that cannabis was used in religious rituals at the site. The discovery is the earliest evidence of cannabis use in the Ancient Near East, according to authors of a study published Thursday in the archaeological journal Tel Aviv. The researchers studied residue from two limestone altars that were discovered in 1963 at the entrance to the “Holy of Holies” of a Judahite shrine devoted to Yahweh, the Hebrew name for God used in the Bible. The site, which was built in approximately 750 BCE and used for only about 35 years, is part of Tel Arad, an archaeological mound located in Israel’s Beersheba Valley west of the Dead Sea. The tops of both altars contained residue that archaeologists at the time of discovery attributed to the ritualistic use of incense. Chemical analysis of the residue conducted more than 50 years ago to determine the source of the residue had been inconclusive. The residue from the smaller of the two altars was found to contain the cannabinoids THC, CBD, and CBN. Fatty acids and hormones that researchers attributed to a mammalian source and evidence of animal feces were also discovered. The second altar contained terpenoids associated with frankincense and further evidence of animal fat of a mammalian origin. The researchers believe that cannabis resin was mixed with the dung and fat and ignited to achieve a slow, smoldering burn that would produce smoke conducive to group inhalation. The authors of the study wrote that they are unsure how cannabis made its way to Tel Arad. But because no cannabis seeds or pollen have been found at archaeological sites in the Ancient Near East, they theorize that it was imported to the area as hashish. 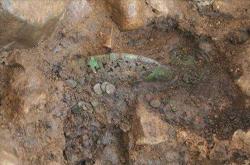 Gyeongju -  A pair of gilt-bronze shoes thought to date to the late fifth or early sixth century A.D. was found in one of three tombs at a burial site in Gyeongju, the ancient capital of the Silla Kingdom in eastern South Korea. The tomb also contained saddles, bronze ware, iron pots, and earthenware. Researchers from the Silla Cultural Heritage Research Institute said such shoes were covered with T-shaped holes and were only used for funeral ceremonies. The archaeologists will continue to investigate the three tombs.

NORVEGE - Seivåg - A couple installing insulation under the floor of their home in northern Norway discovered a dark blue glass bead and a Viking ax dated to between A.D. 950 and 1050. “We first thought it was the wheel of a toy car,” said homeowner Mariann Kristiansen, whose grandfather built the house in 1914. She immediately reported the find to local authorities. Archaeologist Martinus Hauglid of the Nordland county government visited the site and thinks the house may have been built over a grave dating to the Iron Age or the Viking Age. The artifacts are being examined at Tromsø Museum while archaeologists continue to investigate the site. Savojbolagh  -  The head of the Cultural Heritage and Tourism Research Institute announced on Sunday that with discovery of six 7,000-year-old pottery vessels over the past few days in Moshe Lan hill, Ismail Abad village on suburbs of Savojbolagh city of Alborz province, the situation of the ancient area will be examined. Pottery and Bone Data from the Fifth Millennium BC. Six complete pottery vessels probably belonging to a fifth millennium burial including base vessels, pottery and pottery jars with red gutter with geometric and animal motifs (goat pattern) in the type It was unique. Nijmegen - Archeologists in Nijmegen have found a section of wall belonging to an ancient Roman aqueduct which once ran from the hills outside Berg en Dal to the legion camp stationed in Nijmegen, the city said in a statement on Saturday. The structure was discovered 3 meters below the surface of a construction pit, which archeologists suspect may have been the remains of a gutter through which water flowed, according to the municipality. The Romans are likely to have used the aqueduct to channel drinking water to a nearby legion of about five thousand soldiers in what would be the present day neighborhood of Hunnerberg on the city's east side. "From about 71 AD on the Hunnerberg lay the only legion in what is now the Netherlands: the legio X gemina," the city said in a statement. A military city (Canabae legionis) was founded around the camp, where thousands of people also lived and worked. It is estimated that at least 10,000 to 15,000 people lived on the Hunnerberg. The daily need for clean drinking water was greater than what was available locally. The Roman solution is the aqueduct." The Zuid-Holland town of Voorburg and Nijmegen in Gelderland are the only two Dutch cities that can trace their origins back to Roman times. The settlement of Noviomagus first received city rites in 98 AD.