Gozo - Heritage Malta also launched a 3D virtual reconstruction of facial features based on one of the prehistoric skulls (over 5,000 years old) found at the Xagħra Stone Circle in Gozo. It revealed, for the very first time, what one of the earliest Maltese actually looked like. It was a face which was much closer to what one would expect from a woman of our day and age rather than that of a person who lived on the islands over 5,000 years ago. 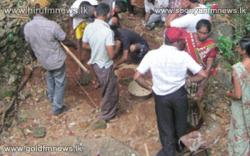 Balangoda  Kuragala - Officials at the Department of Archaeology speaking to a local radio station said the prehistoric human skeletons and fossil remains found at the Balangoda – Kuragala archaeological site are to be subject to overseas testing to determine its age. During excavation activities at the site stone implements, fossilized bone fragments and a human skeleton were uncovered on April 25l and it has been determined that the skeletal remains are of prehistoric origin, local media reports suggested. An Excavation officer Saman Kumara Aeraetold the local radio station that the discovery has led to the expansion of the excavation project. 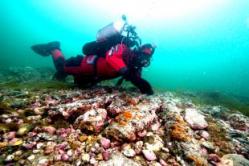 Louisbourg - A team of underwater archeologists is diving to the remains of 18th-century French warships that were sunk during the second siege of Louisbourg in 1758. Parks Canada’s underwater archeologists have been studying what remains of the ships in the waters off Fortress of Louisbourg National Historic Site since the early 1960s. For this dive, they are also gathering fresh, high-quality video and pictures for new exhibits and for a festival of all of Parks Canada’s archeologists to be held during Louisbourg 300 celebrations this summer. Some ship parts like some rigging, pulley components, stone and iron ballast are also on the ocean floor. Underwater archeologists last visited the shipwrecks in 2008. Different visits to the shipwrecks can reveal new artifacts, like the discovery this time of fabric that Moore thinks may have been used as a waterproof sealing agent. David Ebert, a manager of cultural resources for Parks Canada, said there are thought to be the remains of up to 10 shipwrecks directly related to the second siege of Louisbourg, including six studied by the underwater archeologists. Some of the six were scuttled by the French in a harbour channel in a failed attempt to block British ships, and some others were sunk by fire or cannon fire in the inner harbour.

Milas - Excavations in a field in Milas, a district of the southwestern province of Mugla, has uncovered mosaic tiles belonging to the Roman era. The excavations began after the Milas Gendarmerie Command raided a store in Milas upon a tip-off and found five Roman-era pots there. Also, three unregistered rifles, one unregistered handgun and fireworks were seized in the raid. Two suspects were taken into custody. An excavation team then started working in the field where the two suspects reportedly said they had found the pots. Excavations unearthed mosaic tiles one meter below the surface. The excavations at the field continue. 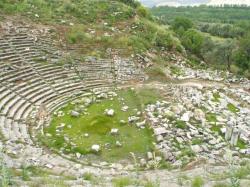 Stratonikeia - Archaeologists have re-launched an excavation project in the ancient city of Stratonikeia, which is located in the southwestern province of Muğla, where many artifacts have been unearthed since the work first began in 2008. Stratonikeia, which is situated in the present day village of Eskihisar and often referred to by archaeologists as the world's largest city built entirely of marble, is also known as an ancient city of great warriors. Many gladiator gravestones have been found there, including those belonging to famous fighters such as Droseros, who was killed by Achilles, as well as Vitalius, Eumelus, Amaraios, Khrysopteros and Khrysos.  The excavations are being carried out by the archaeology department at Denizli's Pamukkale University and are headed by Professor Bilal Söğüt. Söğüt told the Anatolia news agency that they uncovered 702 historical artifacts in 2012 and have now resumed work for the next six months with a team of 100 people. Söğüt further stated that they have applied to the United Nations Educational, Scientific and Cultural Organization (UNESCO) for Stratonikeia to be put on the World Heritage List. To date the largest gymnasium in Anatolia, a basilica, a necropolis and the fortification walls have been restored. The original 10-meter-high columns on Stratonikeia's main street have also been re-erected.