Falerii Novi - Archaeologists have used advanced technology to map out an entire ancient Roman city buried deep underground without any digging. For the first time, archaeologists at the University of Cambridge and Ghent University in Belgium have used ground penetrating radar (GPR) to create a complete and detailed map of the Roman city of Falerii Novi in Italy. The team discovered a baths complex, a market, a temple and a public monument, as well as the city’s sprawling network of water pipes dating back to the 3rd Century. Working in a similar fashion to regular radar, GPR technology bounces radio waves off objects and uses the “echo” to build up a picture at different depths. While traditionally archaeologists would dig in the ground to unearth new discoveries, the team surveyed 30.5 hectares (75 acres) within the city’s walls – just under half the size of Pompeii – by towing GPR instruments behind a quad bike. Located 50km (31 miles) north of Rome and first occupied in 241 BC, Falerii Novi survived into the medieval period until around 700 AD.

Dublin - An archaeological dig near Dublin Castle has uncovered some of the city's earliest landscape, including the original course of the River Poddle. According to archaeologist Alan Hayden, the dig at Ship Street has revealed that the Poddle originally ran through a deep ravine before becoming the Dubh Linn – or 'black pool' – that gave the city its name. The excavation works have already revealed that the Dubh Linn was significantly bigger than originally thought, and it’s now believed it extended further westwards into the current dig site. Mr Hayden said the River Poddle was first diverted by the monks of St Thomas in the 1170s to create mills, and when the land dried out it was used as a quarry. The earliest parts of Dublin Castle and the city walls are thought to have been built from this stone. Finds from this part of the dig include a Norman longbow arrow shaft, which was preserved in the water of the ravine and is considered rare. There was also a hunting arrow head, shoes, and a 12th century candle holder. 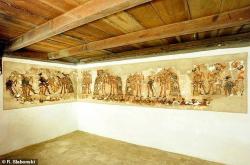 Chajul - 'Priceless' Mayan wall paintings discovered in a house in Guatemala blend indigenous techniques with colonial-era Spanish motifs, researchers have revealed. The artworks — thought to date back to around 1524–1821 AD — were first uncovered in 2003 during renovations of the property, which lies in the town of Chajul. Accordingly, the blend of styles in the Chajul paintings may represent a resurgence of local culture as the imperial power's religious and political influence waned. The wall paintings cover three of the walls of the property's central room.  The team found that the wall paintings bear many similarities with local pre-Hispanic Maya art — suggesting that they were most likely made by indigenous artists using traditional materials and methods, albeit picking up some colonial influences. Specifically, the paintings appear to depict ceremonial dances that recreate important historical events or religious rituals — with figures in the art seen dancing and playing instruments, with some wearing traditional Maya dress while others are clothed in European attire from the colonial period. The Ixil Maya people believe that the paintings may represent the 'Baile de la Conquista' — the 'Dance of the Conquest' — which recounts the conquest of the Maya by the Spanish and their eventual conversion to Christianity. Alternatively, the art may depict the 'Baile de los Moros y Cristianos' — the 'Dance of the Moors and Christians'. 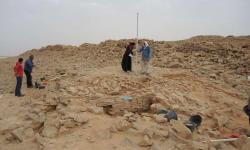 Dûmat al-Jandal  - In contrast to the prehistoric remains of the Near East, the megalithic monuments of Arabia remain largely unknown. These monumental structures, made of dry stone walls, still hold many secrets in terms of their construction, function and chronology. An international collaboration of scientists have discovered a 35-meter long triangular platform in the oasis of Dûmat al-Jandal (northern Saudi Arabia). Built in several phases from the 6th millennium BC, this exceptional monument was probably dedicated to ritual practices, some of which were probably funerary and commemorative. To arrive at these conclusions, scientists studied and dated the objects and human remains from deposits found in and around the platform—in the two side niches and also in nearby tombs. These discoveries, which appear in the journal Antiquity on June 9th, 2020, demonstrate a ritual use during prehistory, and are a potentially symbolic imprint left by nomadic pastoralists in the landscape during this remote period.

Por-Bajin - Teetering on a small island in the middle of Siberia lies the mysterious ruins of an ancient fortress. Archeologists have recently ventured to this remote structure and carried out cutting-edge dating technology, concluding the colossal complex was built in 777 CE.  Known as Por-Bajin, which translates as “clay house,” the complex consists of 12-meter-high (39 foot) clay walls that run around a 215-by-162 meter (705-by-531 foot) site. It was built on a small island in a lake in the mountains of southern Tuva near the border between Russia and Mongolia by a group of nomadic Uyghurs, a Turkic ethnic group native to the Xinjiang Uyghur Autonomous Region in Northwest China. Reported in the journal Proceedings of the National Academy of Sciences, researchers carried out radiocarbon-based dating on wood from the site to discover when it was built.

Idur-Kunjadi - The team lead by Prof T Murugeshi, associate professor, ancient history and archaeology, MSRS College-Shirva who had discovered a Mesolithic period rock art at Avalakkipare in Kundapur last years were of the opinion that the settlement could be bigger. Thus began the search for some materials or objects in the nearby places which they could associate with the prehistoric habitation and prove that the settlement was spread over a wide area. "We were searching for some prehistoric sites near Avalakkipare, and with a distance less than 4 kms we found a good number of mesolithic tools near Iduru-Kunjadi. These tools are characterized by blades, scrapers, burine, fluted cores, arrow-heads, and flakes are of nongeometric pattern," Prof T Murugeshi told Deccan Chronicle. "They resembled the tools found at Avalakkipare and also those that were discovered by Dr Rajendran at Netravati Basin in Uppinangadi a few years ago. Prof Rajendran had assigned the date of the Uppinngadi site to earlier than 4000 BC. My research indicates that the site discovered by us at Idur-Kunjadi must be dating between 8000 BC to 6000 BC," Prof Murugeshi explains. Prof Murugeshi feels the site at Iduru-Kunjadi is an extension of Avalakkipare site on the banks of a tributary of River Sauparnika. The belt is inside Mookambika wildlife reserve near Kollur. "The site Iduru-Kunjadi even today a huge grazing plain of variety of animals like wild buffalos, wild bores deers and others and which supposedly might have been a hunting plain in prehistoric times," he adds. The discovery is of much importance as it indicates that the habitation was a major Mesolithic settlement spread over a vast area in the basin of Sauparnika and its tributaries.

IRAN - Farashband - “A large Sassanid urban site has been discovered near Farashband of Fars province as the result of a remote sensing project conducted with the help of previously-taken and new aerial photographs and preliminary field studies of archeology on a site. Remote sensing is the process of detecting and monitoring the physical characteristics of an area by measuring its reflected and emitted radiation at a distance (typically from satellite or aircraft). “This [archaeological] area is situated about 11 kilometers northeast of Farashband town, and 28 kilometers away from the ancient city of Gur (now called Firuzabad). It is also located 2.7 kilometers east of Narak village and three kilometers north of Bachan village in (Nujin rural district).” In the first decade of the twenty-first century, Sasanian Archaeology witnessed an increasing interest in the number of landscape archaeological surveys and excavations undertaken, according to a paper written by Qasemi of the Pantheon-Sorbonne University (Université Paris 1 Panthéon-Sorbonne). Covering some 14 square kilometers in area, the site embraces six separate rectangular sections, with a large fortress in the middle section, a large number of pavilions and residential buildings are dotted along its streets, the archaeologist explained, ILNA reported. “Due to the [geographical] location of Farashband area, which was once in the heart of the Sassanid Empire, many archeological finds have been found so far, the most important of which is [cubic-shaped] four-arched monument that is locally called Chahar-Taqi. In the southwest [of the site] is a small rural settlement and in its east corner are the remains of a village that is home to many scattered buildings dating from the Sassanid to the Islamic Middle Ages.” 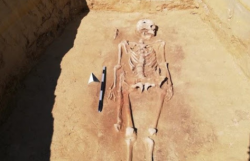