ISRAEL – Jerusalem - Wealthy residents of Jerusalem during the First Temple period suffered from infectious disease due to poor sanitary conditions. A recent archaeological excavation at the Armon Hanatziv Promenade unearthed remains of intestinal parasite eggs from 2,700 years ago in a cesspit beneath a stone toilet in the garden of a luxury estate. Intestinal worms are parasites that cause symptoms like abdominal pain, nausea, diarrhea, and itching. Some of them are especially dangerous for children and can lead to malnutrition, developmental delays, nervous system damage, and, in extreme cases, even death." The intestinal disease could have been a result of poor sanitary conditions that caused fecal contamination of food and drinking water. Other possible causes include lack of awareness of proper hygiene practices such as washing hands; fertilizing field crops with human feces; or consuming undercooked beef or pork. According to the researchers, private toilets from the time period were a privileged possession that only the rich could afford. 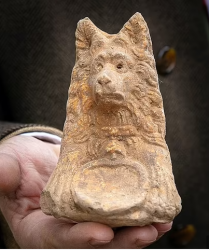 Rome - Excavations in Rome have uncovered an ancient burial complex that held an intact ceramic funerary urn containing bone fragments and a terracotta dog's head statue. Adjacent to the tombs, the team's excavations also uncovered the remains of a young man who appeared to have been buried in the bare earth. According to the experts, the canine bust — small enough to fit in the palm of a hand — resembles decorative parts of drainage systems used on sloping rooms. However, the little dog statue appears to have lost its drain hole, or perhaps never even had one and was fashioned for purely aesthetic purposes.The archaeologists believe that the structures making up the funerary complex were constructed between the 1st century BC and the 1st century AD. the structures appeared to have been damaged by previous underground utility works. All three of the tombs were built on a concrete base. One had walls made of a yellow tuff, the second had a reticulated, net-like, composition, while the remains of the third were confined to just a base which showed signs of fire damage. The funerary comple appears to have been built using the front of an abandoned pozzolana quarry, as is evidenced by the characteristic cuts made into the bank of tuff (a rock made of volcanic ash) on which it appears to have stood. 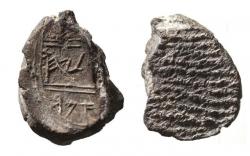 Jerusalem - Dozens of inscribed clay seal impressions recovered during excavations near the Temple Mount have been identified as evidence of two treasuries in ancient Jerusalem in the late 8th century BCE. Archaeologists said the clay impressions, or bullae, were used for the management of storehouses during the First Temple period. In ancient times, the lumps of clay were pressed over the knot of a cord securing a doorknob or a vessel, and the manager of a treasury would then impress his, or his superior’s, seal upon the clay to prevent others from tampering. The Royal Treasury was located in the “Royal Building” located in the Ophel Park, in which numerous storage jars were found, and more recently, at least 34 bullae were discovered. Nearly half of those seals had impressions of woven fabric. The full name on one of the seals was Hisilyahu son of Immer, who apparently served as one of the officials managing the so-called Temple Treasuries, the researchers said. They tied him to a priestly family that served in the Temple in the 7th or early 6th century BCE. Other artifacts discovered in the building strengthen the researchers’ suggestion that it was indeed a treasury, since a partial inscription was found on a storage jar that they suggested read “minister of the treasuries.”

Oslo -  A stick and a bone inscribed with runes have been unearthed in Oslo’s Medieval Park, where a carving depicting a king with a falcon on his arm was found last month. The bone, thought to be a piece of a rib from a horse or a cow, bears Norse inscriptions on both sides, according to archaeologist Solveig Thorkildsen of the Norwegian Institute for Cultural Heritage Research. The inscription includes a person’s name or nickname, and runes for the word bone, referring to the object itself. Thorkildsen’s colleague, Ingeborg Hornkjøl, was working in wet soil at the site when she discovered the rune stick, which is inscribed on three sides in Latin and in Norse. Runologist Kristel Zilmer of the University of Oslo said that the Latin inscription includes the words manus, or hand, and Domine or Domini, for lord or God, in addition to Bryngjerd, a woman’s name. This inscription may record Bryngjerd’s dedication of her life to the service of God, Zilmer explained. Examination of the artifacts under a microscope should reveal more information, she added.

OMAN - ​​Ain Bani Saida - Archaeologists have made a rare find in Oman. They found a stone game board that is more than four thousand years old. The main topic of research was the Bronze Age and Iron Age in the area of ​​Ain Bani Saida village in Oman. “In one of the rooms of a large building from the Umm an-Nar period (2500-2000 BC) we found a game board!” – said the head of the research, Professor Piotr Bieliński. Professor Bieliński added that such discoveries are rare. Many examples of similar tablets are known from the Indus Valley as well as from Mesopotamia, including the famous royal tombs at Ur. The panel is made of stone and has distinct fields and depressions.  “The settlement from the Umm an-Nar period is unique, among other things, because there are as many as four towers: three round and one fractured. Despite its size, about 20 meters in diameter, one of the round towers was invisible on the surface and was It was only discovered during excavations. The function of these towers is still pending clarification” – added Dr. Agnieszka Pieńkowska from CAŚ UW, who is analyzing Bronze Age remains as part of the project. The researchers also found evidence of copper processing at the site.

- Helle Vandkilde of Aarhus University and her colleagues dated a sample of birch tar found recently on one of two horned helmets discovered in 1942 in a peat pit in eastern Denmark. Although curved horns have long been associated with medieval Vikings in popular culture, the tests indicate that the so-called Viksø helmets were ritually deposited in the bog around 900 B.C., some 1,500 years before the Viking Age. The helmets also bear symbols resembling the eyes and beak of a bird of prey. Feathers are thought to have been fastened to the ends of the helmets’ horns with birch tar. Each helmet may have also been fitted with a mane of horsehair. Vandkilde explained that bulls’ horns and birds of prey were used as symbols of the sun in the ancient Near East, and in Sardinia and southwest Iberia during the Bronze Age. These symbols may have traveled with traders to Scandinavia along with metals and other items, and been adopted by local leaders as the region became more politicized and centralized, she added. “And those leaders must have used religious beliefs and innovative traits, like the horns, to further their power,” Vandkilde said. Read the original scholarly article about this research in Praehistorische Zeitschrift.

Castabala - Archeologists have unearthed 10 relief masks depicting comedy and tragedy plays performed in the ancient city of Castabala, which dates back to 500 BC. While the theater part of the ancient city was largely unearthed during excavations carried out last year, it was determined that the masks found depicted the theater plays staged at that time, and sullen masks were made for drama and smiling masks for comedy. Noting that in the theater area, the orchestra, stage building and parados -- entrance roads on both sides of the orchestra -- that provide the entrance to the theater have been exposed to a great extent. One of the important remains we found is the inscribed statue ground dedicated to the Roman Emperor Hadrian by the people's assembly