Fulmodeston - Mystery continues to surround what was found in the field at Fulmodeston near Fakenham in 2014, with information about the discovery not expected to be published for several months. The energy company which was digging the cable trench for the offshore Dudgeon wind farm, called Statoil, said the findings were unlikely to be made public until 2019. But it confirmed it had come across a Saxon burial ground while surveying for the cable trench which was dug from Weybourne on the coast to Necton.Freddie Scadgell, head of Royal HaskoningDHV’s archaeology team, said each step of the process was agreed with the Council’s archaeologists. “We look forward to the publication of the excavation report and in time the transfer of the artefacts recovered to the Norfolk Museum and Archaeology Service at Norwich Castle Museum,” he said. He added some information about the discovery could be published later this year.The cemetery is thought to date from the fifth and sixth centuries and was not publicised to stop it being damaged. The area where the cemetery was discovered is rich in Anglo-Saxon finds. In January 2016 81 Anglo-Saxon coffins were found in a field in Great Ryburgh when landowner Gary Boyce was digging a fishing lake.

TIBET- Ngari - Chinese archaeologists believe that the 9th century Purang stele which was discovered in northern Tibet to be the oldest in the Himalayan region. Shargan Wangdue, of Tibet Cultural Relics Protection Institute, said the stele was discovered in Ngari prefecture in northern part of the Tibet Autonomous Region. The stele is 1.85 meters tall, inscribed with the image of a standing Buddha, state-run Xinhua news agency reported today. On its left side are 24 lines of old Tibetan language. On its right side are 19 lines of Buddhist prayers. Shargan Wangdue said most scholars agree that the stele was set up in 826 or 838, during the period of Tubo kingdom. “This stele shows Buddhism was already being practised during the Tubo period in western part of Ngari,” Shargan Wangdue said. Also, archaeologists in south-west China’s Sichuan Province have restored a “dragon bed” believed to be used by an ancient king 2,500 years ago. The bed, 2.55 meters long, 1.3 meters wide and 1.8 meters tall, is the oldest and the best-preserved lacquered bed ever unearthed in China, said Yang Tao, an assistant researcher with Chengdu Cultural Relics and Archaeology Research Institute.

IRLANDE – Cork - Discoveries included the walls of a 12th century stone church and an urban layout from 1070AD, pre-dating the town settlement in Waterford and, potentially, marking the earliest known discovery of urban settlement in Cork. Walls and foundations of St Laurence's Church were discovered in the area closest to the south channel of the Lee, with archaeologists recommending that these not be preserved on site due to potential environmental and tidal degradation. The report notes that archaeologists also discovered evidence that houses had been built on limited available ground just above water level on the part of the site that fronts onto South Main St, with dendro-chronological (tree-ring dating) samples indicating that these are from as early as 1070AD.

PEROU - Lambayeque - Archaeologists have discovered two chambers used for political ceremonies on Peru’s desert coast more than 1,500 years ago that had previously only been glimpsed in the illustrations of the ancient Moche people, an archaeologist said on Monday. The finding, at the ruins of the Limon archaeological complex in the region of Lambayeque, will provide key clues to understanding the Moche’s political life before the desert society’s sudden decline, said lead archaeologist Walter Alva. One room features two thrones where a powerful leader and guest likely enjoyed elaborate feasts, said Alva. The other has a circular podium, possibly for making announcements. The events that took place in the chambers were so important they had been featured repeatedly on Moche ceramics, Alva said. “These scenes had been depicted in the iconography of the Moche world but we had never been lucky enough to physically find where they took place,” he said. “It’s a very important finding.” The Moche, one of several complex societies that thrived in Peru long before the rise of the Incan empire, ruled over a vast swath of coastal desert from 100 to 700 AD, thanks to irrigation canals they built to grow crops in desert valleys. The Moche are known for their elaborate gold work and sculptures featuring a wide variety of sexual acts. Many researchers believe a disastrous climate event, such as the El Nino phenomena that still triggers severe flooding in northern Peru, probably led to the collapse of Moche society. Alva said construction on part of the recently unearthed chambers appears to have halted abruptly in the 5th century. The rooms were believed to have been used only by the elite, and paintings of fish and sea lions can be seen on the walls. Women are believed to have held political and religious positions in Moche society. Last year, Peruvian officials and archaeologists unveiled a replica of the face of an ancient female Moche ruler, the Lady of Cao, whose elaborately tattooed body had been buried with weapons and gold objects. 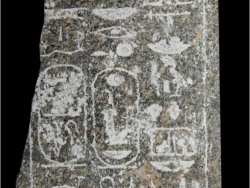 Akhmim - The Ministry of Antiquities announced the discovery of an artifact in a parking lot in Akhmim, Sohag governorate, during a drilling operation to develop the site. The ministry said in a statement on Monday that the archaeological committee, which was formed under the chairmanship of Gamal Abdel Nasser, confirmed that the piece found in the parking is an official historical artifact. The discovered piece is part of a black granite statue of King Amenhotep III from the Eighteenth Dynasty, said Abdel Nasser. Preliminary examination showed that the statue depicts the with his left foot forward, a tradition commonly employed while building statues of ancient Egyptian kings, said Abdel Nasser. On his right foot, are hieroglyphic writings which represent the coronation and birth names of King Amenhotep III, he added. The artifact was transferred to Sohag Museum for restoration.