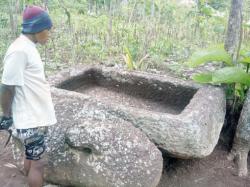 Bondowoso- A young man busied himself cutting away the undergrowth in the wild forest, cleaning a stone sarcophagus sitting about 50 meters from a cave leading into the side of a mountain. When asked, the man, Mulyadi, a farmer, did not know what the sarcophagus was. The 29-year-old said that he only knew that it was a historic object that he and his neighbors needed to care for. According to Mulyadi, hundreds of such artifacts could be found near the mountain and his village of Tanah Wulan in Bondowoso, East Java, about 200 kilometers from Surabaya.  Bondowoso Archaeology Agency official Heri Kusdaryanto says that the residents of about 80 nearby villages have been serving as the caretakers of more than 1,100 megalithic (large stone) artifacts, which include menhir (standing stones), sarcophagi, statues, dolmen (lying stones or tomb tables) and caves.  Heri said that the huge number of stone monuments in the region have previously led scientists and archaeologists to dub Bondowoso the megalithic city. Batu kenong are Bondowoso’s most famous megalithic asset, Heri said. The stones — there are more than 400 in the region, the most in Indonesia — have a bulge on their tops, making them resemble a kenong, or the small gong used in traditional Javanese music. One nearby village, Pekauman, is home to 160 batu kenong.  Soejono reported that the batu kenong were created for religious ceremonies held to thank their ancestors for prosperity and fertility, Heri said. Dolmen — another megalithic structure built for religious reasons comprising two or more stones supporting a large flat horizontal capstone — can be found in no fewer than 16 villages in the region.

Ghantasala - The Archaeological Survey of India (ASI) is all set to conduct excavations on Ernampadu mound at Ghantasala village in Krishna district in the year 2015. The mound, where Buddhism flourished once, is spread in nearly two acres. Several Buddhist remains such as eight half-medallion pillars and the two sculpted feet of Buddha were unearthed at the mound during the earlier excavations done by the ASI. In Ghantasala village, where ASI runs an exclusive museum to conserve the Buddhist remains and a Stupa, excavations were stopped with the demise of then Superintendent Archaeologist Mr. Jitendra Das. Mr. Das had led the excavations in 2008, during which complete formation and shape of the Buddhist stupa in the heart of the village was excavated in good condition. In 1870-71, Boswell of the East India Company first reported Ghantasala as a Buddhist site and later Alexander Rea excavated the stupa partially. “Our studies have proved the existence of Buddhist monasteries dating back to the 1st century A.D. at the Ernimpadu mound. We are gearing up for excavations of the mound in 2015,” ASI Deputy Superintendent Archaeologist D. Kanna Babu told The Hindu. 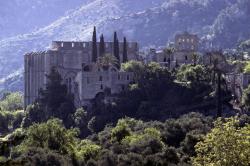 Bellapais - Bellapais Abbey could collapse unless nearby works for the construction of a sewage treatment reservoir stop, civil engineers said on Tuesday.The abbey of Bellapais is a special and rare archaeological monument, it said, one of the most important remaining examples of gothic monasterial architecture in the eastern Mediterranean.“We will cooperate with Turkish Cypriot civil engineers and we plan on going there this week to see what is going on,” said Varnavas Lambrou, general secretary of SPOLMIK. He added that the foundations of centuries’ old monuments are fragile and in this case due to its location, on top of a hill facing a cliff, any intervention could disturb the terrain the building stands on. “There could be problems due to digging or corrosion,” Lambrou said. He said if they detect a problem, they will ask that works stop or for protective measures to be taken, such as retaining walls.The 13th century monument located a few kilometres from Kyrenia was built by Aimery de Lusignan at the end of the 12th and early 13th century and was first inhabited by an Augustinian religious order that had fled Jerusalem in 1187 after its fall to Saladin. Additions were made in the 13th and 14th centuries.