Chichester - Archaeologists excavating land to the north-west of Chichester over the last few weeks have made the exciting discovery. Investigations have revealed a Bronze Age enclosure which dates to circa 1,500 to 1,000BC, with features that contained large sherds of well preserved pottery. Equally significant is the unexpected discovery of a previously unconfirmed section of the Chichester Entrenchments – a series of huge, earthworks which were constructed around the city from the later Iron Age, circa 100BC onwards. Jon Sygrave, project manager for Archaeology South-East (UCL), said: “We’ve uncovered a section of the Chichester Entrenchments, which probably infilled during the mid Roman period. “The section we found is about 9m wide and 2.5m deep and would have had an associated huge earth bank. “The entrenchments show that Chichester was a significant area during the Iron Age over 2,000 years ago, before the Romans settled there.” The boundary of the Bronze Age enclosure is shown in this aerial photograph as the two dark, perpendicular lines coming down from the top of the 3,500sqm excavation site. The thick vertical line shows the previously unconfirmed section of the Chichester Entrenchments.

Lúčna - Archaeologists have discovered a dwelling from the time of the Bronze Age in the Lúčna district in Detva. An archaeological company from Banská Bystrica was exploring the land under planned family houses, when the ground plan of a house, five metres wide and 8 and half metres long, was discovered. Until now, only holes were found in Detva but it was unable to define them as a settlement. This is the first time a settlement where people had been living a thousand years before Christ has been confirmed in the area. In 2016 Noemi Beljak Pažinová confirmed the existence of a prehistoric settlement in Lúčna during her research when she found a small stove last year. In the prehistoric house, the archaeologists and volunteers also uncovered fragments of receptacles for the preparation and serving of food. Some fragments are more luxurious with polished surfaces. Both archaeologists agree that dwellers of this area probably supplied the fortified settlement of Kalamárka, the oldest known archaeological locality of central Slovakia, 5 kilometres from Detva. 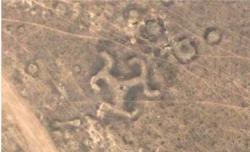 Turgay - The Turgay geoglyphs triggered great interest among foreign archaeologists, scientists, mass media and even esotery scientists. During the past 10 years, Dey and a team of archaeologists and scientists made 14 expeditions and discovered 344 geoglyphs, or large elements produced on the ground. According to the working hypothesis, the earliest geoglyphs date as far back as 8,000 years.  the answers to the questions of who, when and why built the geoglyphs were not answered until the beginning of 2012. By this time, the team studied the work of Harvard University Professor Anatole Klyosov in the field of DNA genealogy and the discovery of Chankillo, the oldest solar observatory, made by an archaeologist from Catholic University of Peru, Professor Ivan Ghezzi,” Dey said in an interview for this story. The ancient monumental complex in Peru is similar to the Turgay geoglyphs, which led to the idea of applying the method of tracking the yearlong movement of the sunrise at Chankillo to the Turgay sites. StarCalc, the professional astronomy planetarium and star mapping programme, allowed modelling the annual sunrise and sunset point observation cycle and applying it to the Turgay objects’ latitude and longitude coordinates. Calculations showed the Turgay geoglyphs can be used as solar calendars. Dey, however, needed to verify a rule on the Turgay site: objects should be located above the horizon line relative to the calculated observation point to work according to the principle of the solar observatory. Financial support from Rinat Naimanov, general director of AllianceStroyInvest, provided the funding to equip and complete five reconnaissance expeditions in 2012. In the course of field research, 14 of the 19 objects found at that time were examined. At each facility, Dey gained visual confirmation that the objects are located above the horizon line relative to the calculated observation points and can be used as solar calendars. Artefacts from the Mesolithic and Neolithic epochs (10,000-6,000 BP) were discovered not far from 10 of the 14 investigated structures, particularly artefacts related to the Mahanjar culture. In the following years, five more objects were inspected, which also gave confirmation of the location above the horizon line relative to the calculated observation point. Having reviewed the results of studies of various scientific disciplines (archaeology, geology, climatology, DNA genealogy, etc.), the team formulated a working hypothesis of the origin and mission of the Turgay geoglyphs. Known carriers of haplogroup R1b are the House of Steward (Scottish monarchs), House of Saxe–Coburg and Gotha (German dynasty), Windsor royal house of the United Kingdom, Romanov dynasty from Peter III, Kings of Denmark and Norway, George Washington, Abraham Lincoln and several other U.S. Presidents. “According to the testing results of royal families’ members of the Western world, the haplogroup R1b appears in the male line. That is, according to the working hypothesis, their ancestors laid the foundations of the civilisation of the modern European world in the Turgay trough from 9,000 to 6,400 years ago,” said Dey.He announced the Jan. 1 start of an international Turgay Discovery project, encouraging people throughout the world to make their own contributions by visiting the website turgay.kz. The international project aims at raising funds for research, as well as further interaction with foreign scientific institutions to organise expeditions to the Turgay sites.

Thiruvizha Mahadeva - The Department of Archaeology will assess the value of two 600-year-old darushilpas which were sold by Thiruvizha Mahadeva temple authorities as part of the “temple’s renovation”. The temple is believed to have been consecrated by Swamy Vilwamangalam in the 14th century by installing Shiva in the form of Lord Kalakandha (Lord Siva who swallowed poison during Palazhimadhanam),. Mahadeva temple, which is well known for the Marunnu seva ritual – purifies devotees by making them vomit the poisonous elements eaten by them, using certain indigenous medicines – has been mentioned in Athihyamala and Mahakshtrangalude Mumbil by Nalaankal Krishna Pillai.