Vayalogam - Ruins of a dilapidated Siva temple bearing stone inscriptions of Cholas and second Pandyan empires dating back at least to 800 years were retrieved in Vayalogam, a village near Iluppur in Pudukottai district. A Suresh, 27, one of the three history enthusiasts in volved in the finding, said that when he was touring Vayalogam and Iluppur localities with fellow enthusiasts V Parthiban and N Murugan, the trio found a few abandoned stone pillars but the remaining portion of a temple-like structure was completely engulfed in thickets of karuvelam.  A stone inscription on the walls of the 3,000 sqft Vayalogam temple revealed that the villagers had used precious ornaments in the temple as ransom to retrieve a unidentified village head detained by Vallaldevan, a chieftain.

Tel Es-Sakan - Palestinian and French archaeologists began excavating Gaza's earliest archaeological site nearly 20 years ago, unearthing what they believe is a rare 4,500-year-old Bronze Age settlement. But over protests that grew recently, Gaza's Hamas rulers have systematically destroyed the work since seizing power a decade ago, allowing the flattening of this hill on the southern tip of Gaza City to make way for construction projects, and later military bases. In its newest project, Hamas-supported bulldozers are flattening the last remnants of excavation. Tel Es-Sakan (hill of ash) was the largest Canaanite city between Palestine and Egypt, according to Sadeq. It was named after the great amount of ash found during the excavations, which suggests the settlement was burnt either naturally or in a war. Archaeologists found the 25-acre hill to be hiding a fortified settlement built centuries before pharaonic rule in Egypt, and 1,000 years before the pyramids. But the excavations stopped in 2002 due to security concerns. When calls on Hamas to stop the recent flattening intensified last month, the nearest available expert to gain access to Gaza was Jean-Baptiste Humbert, a Jerusalem-based archaeologist at the Ecole Biblique and who had excavated other sites in Gaza.
"Today the complete southern facade of the Tel is erased," said Humbert. In previous years, faces and ramparts on other sides were also destroyed. "Now it is destroyed all around," he said. It's among the earliest sites indicating the emergence of the "urban society" concept in the Near East, when communities were transforming from farming villages around 4,000 BC, and it was on trade routes between Egypt and the Levant, according to Humbert. Humbert shared an aerial photo from 2000 showing patterns of walls from atop the mound. The area "was the first city of Palestine to have a city wall," he said. Now, "the field work you see in the photo is totally destroyed."
http://www.arabnews.com/node/1173396/middle-east

Birka - Viking-era burial costumes depicting the names "Allah" and "Ali" were discovered by Swedish researchers last week, raising questions about the relation between Muslim and the Scandinavian civilization. Archaeology researchers from Uppsala University discovered the silk costumes with Kufic script during excavations in Viking graves located in Sweden's Birka city. Muslims use the word "Allah" for God, while Ali is the name of Prophet Muhammad's cousin and son-in-law. The Vikings could have been influenced by Islam and "the idea of an eternal life in paradise after death," Annika Larsson, a researcher in textile archaeology at Uppsala University, told Anadolu Agency Friday. "In the Quran, it is written that the inhabitants of paradise will wear garments of silk, which along with the text band's inscriptions may explain the widespread occurrence of silk in Viking Age graves," the researcher said in an earlier statement. In 2015, Swedish researchers at Stockholm University also discovered a ninth century ring in a Viking grave with an inscription that says "for Allah" or "to Allah." 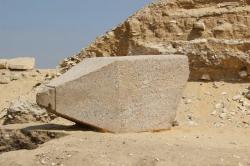 Saqqara - Archaeologists working at the Saqqara necropolis, a large burial ground south of the Great Pyramid of Giza in Egypt, have recovered the tip of an obelisk more than 4,300 years old; it's one of the largest fragments from an ancient stone monument ever found. The Swiss-French mission, headed by professor Phillippe Collombert, uncovered the upper part of the monument, built in 2,350 B.C. in the Old Kingdom era during the reign of Ankhnespepy II. According to a statement by the Egyptian Ministry of Antiquities, the piece of the recovered obelisk, carved in red granite, was some eight feet in length. Collombert explained that at its full size, the monument likely measured 16 feet in height. Indentations at the top of the obelisk indicate that it was covered in copper or gold to make it reflect the sun’s rays. The obelisk appeared to have been moved some distance from its original position at the entrance of the queen’s funerary complex. It is possible some of the stone from its lower section was removed and used as quarry during the New Kingdom era, or possibly later. Ankhnespepy II, the wife of Pepy I and the mother of Pepy II, was one of the most important queens of the Sixth Dynasty. When Pepy I, her husband, died, she married his son, Merenre, with whom she had the future King Pepy II. She became effective ruler of the kingdom when Pepy II was just six years old.

Zug-Riedmatt - Archaeologists found a copper blade in Switzerland that's just like the ax Ötzi the famous "Iceman"was carrying when he died. Like Ötzi's ax, this tool was made with copper that came from hundreds of miles away, in present-day Tuscany in central Italy. The discovery could shed light on Copper Age connections across Europe. The ax was discovered in Zug-Riedmatt, one of the many pile-dwelling villages around the Alps that are famous for their prehistoric wooden houses built on stilts on lakeshores and other wetlands. "It was a very efficient general-purpose ax, especially proper for woodworking," said Gishan Schaeren, an archaeologist with the Office for Monuments and Archaeology in the Swiss canton (or state) of Zug. But in addition to chopping trees to build stilted houses, people could use these axs as lethal weapons, Schaeren added. The newfound blade was between 5,300 and 5,100 years old and missing its wooden handle. It was about half the weight of Ötzi's blade and shorter, but the same shape. By measuring the traces of lead in the blade, Schaeren and his colleagues could link the copper to the same source in southern Tuscany.

Cocoa - There's a 50-50 chance that the wood used to make the canoe that washed ashore in Cocoa during Hurricane Irma dates between 1640 and 1680 — generations before the signing of the Declaration of Independence. The dugout canoe was discovered Sept. 11 along the Indian River Lagoon shoreline by Cocoa photographer. A Florida Division of Historical Resources archaeologist inspected the 15-foot log vessel, and radiocarbon dating results were released Thursday.

Istanbul - Fourth century A.D. Byzantine palace may be located under a building which previously belonged to the Press Publicity Association, reports said Friday. According to the Habertürk daily, the 360-square -eter land above the ancient palace, located in Istanbul's famous Sultanahmet district, was put under protection after its evacuation in 2011 and demolishment in 2013. Excavations have not been launched yet, the daily reported. Archaeologists have reportedly said that the palace could have been constructed by Philoxenus, one of the great senators during the reign of Byzantine Emperor Constantine the Great, between 324 and 337 A.D. Another scenario claims that the site includes the remains of Senator Lausus' Palace, thought to be constructed between 415 and 420 A.D.. Archaeologists have also discovered vaults of the Cistern of Philoxenos (Binbirdirek Sarnıcı), which is located right across the site of the unidentified palace. Meanwhile, the Press Publicity Association noted that the vault  structure has been registered as a cultural asset.