Karlskrona - Swedish divers confirmed on Thursday that they have uncovered the wreck of a legendary warship which was lost off the coast of Karlskrona in southern Sweden in the 17th century. Marine archaeologists from the Maritime Museum in Stockholm said that a wreck found near Karlskrona is that of the 'Solen' (which means 'sun' in Swedish) warship from the 1600s. The wreck was discovered at a depth of only six metres, in an area where several other warships are believed to lay buried. It was intentionally sunk in 1694 after it had served its purpose. Solen was one of the largest ships in the Baltic in his heyday and took part in Sweden's sea battle with the Danish and Dutch navies off the island of Öland in 1676. Built in Lübeck in 1669 with 72 guns and a gross tonnage of 1,400, it out-sized even the famous warship Vasa, which sank in 1628, and its 64 guns. 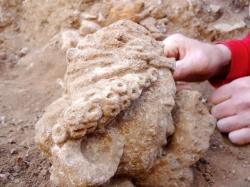 Bhamala -  The government of Khyber-Pakhtunkhwa will open the recently excavated portion of Bhamala’s historical sites for tourists on Sunday, said a Directorate of Archaeology and Museums official on Wednesday. The excavations were carried out by the Archaeological Research and Conservation Programme India and Pakistan (ARCPIP), Hazara University and K-P Directorate of Archaeology & Museums. These institutions completed a two-year field study of the Bhamala Buddhist Archaeological Complex. The UNESCO World Heritage Site of Bhamala is situated some 25 kilometres from Taxila Museum. The excavation data reveals relics that date back to the third century CE. More than 500 priceless artefacts were recovered, including a Maha Puri Nirvana (death of Buddha) statue measuring 14 metres in length. According to officials, excavation was put on hold till the beginning of next year to exhibit the already discovered artefacts

Great Mercury - On private Great Mercury Island off the northeast coast, archaeologists are excavating an early Maori site—dating to the second half of the 14th century, perhaps just decades after Polynesian seafarers first arrived. It appears to be a small fishing settlement, marked by thousands of stone artifacts, as well as fishhooks made from sea mammal teeth and the bones of moa, the large native birds that were hunted to extinction 100 years after human arrival. A number of oceanside sites such as this one are at risk from coastal erosion.

- International and national experts from the Nepalese Department of Archaeology and an archaeological team from Durham University have begun post-disaster excavation surveys and rescue excavations at earthquake damaged UNESCO World Heritage Sites in the Kathmandu Valley, Nepal. “Creation of risk maps and identification and characterization of subsurface archaeology will facilitate the future protection, preservation and presentation of the Kathmandu Valley World Heritage Site, specifically, the severely damaged sites of Hanuman Dhoka, Patan and Bhaktapur” said Christian Manhart, Representative of the UN Educational, Scientific and Cultural Organization (UNESCO) to Nepal in a press release issued today. The 7.8 magnitude earthquake which hit Nepal in April this year, caused over 8,000 fatalities, devastated large areas of county and neighbouring regions, including destruction of Nepal’s unique monuments within the UNESCO Kathmandu Valley World Heritage Site of Universal Outstanding Value. The monuments of the Kathmandu Valley were a major source of income and economic growth through national and international tourism for the local residents and a key source of foreign currency in Nepal. The severely damaged ornate temples of wood, brick and tile were not only of intangible value, but they also were places of worship for the residents who ‘reach out and commune with their guiding goddesses and gods’ through these temples. Prior to rebuilding the experts will undertake rescue and survey excavations in the damaged medieval city squares of Patan, Hanuman Dhoka and Bhaktapur. 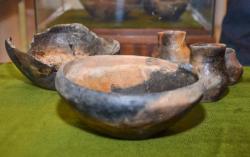 Rahovets - A home dating back to the Early Bronze Age period has been found during the 2015 summer excavations of the ancient and medieval fortress Rahovets near the town of Gorna Oryahovitsa in Central North Bulgaria, which have been the first digs on the site since 1991. The artifacts on display included, among other things, the Early Bronze Age ceramic vessels found inside the Rahovets Fortress which are what the experts are basing their dating of the Bronze Age home on. “The most interesting thing we have discovered is a residence inside the fortress which is dated to the Early Bronze Age. At first, we thought that it dates back to the Early Iron Age – the 12th-6thcentury BC. However, the experts who examined the ceramic vessels that we found there decided that the finds are from the Early Bronze Age, i.e. the beginning of the 3rd millennium BC,” explainsarchaeologist Maya Ivanova from the Museum of History in Gorna Oryahovitsa, who was the deputy head of the 2015 summer excavations at Rahovets.