Wadi al Natroun  - : The Deir Al Suryan’s Holy Virgin Church at Wadi al Natroun Monastery has partially collapsed Friday due to the heavy rainfall hit Egypt’s Delta governorate of Beheira, Antiquities Ministry said. “The dome of a side chamber adjacent to the Holy Virgin Church at the Deir Al Suryan has collapsed,” head of the ministry’s Islamic and Coptic Antiquities Department Mohamed Abdel Latif said. The chamber has no ancient paintings on its wall, Abdel latif said, adding that the Deir Al Suryan, its walls, the surrounding ancient fort and the rest of the buildings at Wadi al Natroun Monastery are “sound and safe.” The rain water accumulated inside the Holy Virgin Church Wednesday before workers and monks were able to drain the water, he said, adding the walls and the floor of the church are still wet. The Monastery of St. Macarius and the Monastery of St. Pishoy were not affected by the rain water which partially covered them on Wednesday and was immediately taken out, he said. Wadi al Natroun Monastery is one of the three early Christian monastic centers located in the desert of the northwestern Nile Delta. 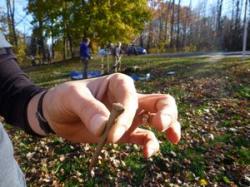 Windham - State archaeologists this week began surveying one of Windham’s earliest settlements on River Road for historical artifacts prior to a forthcoming road construction project in that section of town. Leith Smith, historic preservationist with the Maine Historic Preservation Commission, and his team of archaeologists began a three-week process Monday to determine what lies beneath the soil at the site of the 1764 Province Fort, which is located on the property of the 18th-century Parson Smith house near the intersection of River and Anderson roads. While early Windham settlers built homes on long, narrow plots of land extending from the Presumpscot River to what is now River Road, the fort, built atop a hill, served as refuge against American Indian attacks. So far, the preservation group has uncovered an array of artifacts, such as remnants of early pottery, buttons, nails, a 1700s cuff link, flint from an old flintlock pistol, a path of flat stones and more from shallow pits they dug on the property within 40 feet of the roadside. According to Smith, Phase 2 of the survey, which began Monday, involves digging a series of shallow, square-shaped test pits with a shovel to identify any cultural remains not visible above ground. 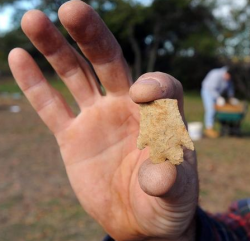 Yarmouth Port  - Ample evidence has been found of occupation of the site of Taylor-Bray Farm in Yarmouth Port going back to around 3,700 years ago. But the latest round of archaeology there has uncovered signs that the site was used by humans much earlier than that, an estimated 9,000-10,000 years ago, when the landscape itself was still in transition from the last Ice Age. Chartier described the people who left behind those ancient points as “Cape Cod’s first tourists,” explaining that they likely came from base camps around what are now Taunton and Middleboro to exploit seasonally available resources before returning home to ride out the colder weather. Those early tourists were visiting a very different place than today’s. “The Cape was a lot bigger back then, you could walk out to Nantucket and Martha’s Vineyard; that was all land,” said Chartier. The Taylor-Bray site, too, was much different, with what is now scenic salt marshes likely open water suitable for fishing. 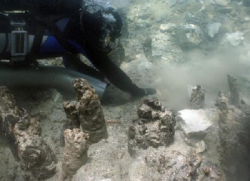 Ričul Turanj - In the sea between the islands of Ričula and Galešnjak in the Pašman Channel in Croatia, archaeologists from Zadar last year found the remains of a large settlement and a port more than 2,500 years old. In early October of this year, the underwater archaeologists started a new research campaign along the coast of Turanj, but in the meantime they have received from the United States the results of radiocarbon dating of wooden pylons which were found deep in the sandy bottom, local news sources report. The analysis showed that the underwater settlement and harbour were not 2,500 years old and that they had not been constructed by Liburnians. The dating of wooden pylons confirmed something that the archaeologists had not even dared to imagine – that the sunken settlement was actually 3,500 years old and was built even before the Liburnian era.