York – Human remains believed to be more than 800 years old have been discovered at York Minster. The body was found by archaeologists during routine work to build a new lift-shaft in the Minster's Undercroft. It is the first time for 40 years that archaeologists have been permitted to work at the cathedral. Dean Jones added: "York Minster's walls have been witness to centuries of human life and I feel sure that archaeologists are likely to encounter even more human burials during their three-week tenure. "We would expect to find, when working at York Minster, evidence of previous life all around the place. Having found the remains of our forebears, they will be reverently cared for until such time as they can be reinterred within the walls of York Minster." Ian Milsted, from York Archaeological Trust, said the grave site had been undisturbed for many centuries which led them to think it pre-dated the present building which was constructed over 250 years between the 13th and 15th centuries.

Bihar - This week, officials in eastern India announced their plan to build a replica of Cambodia's spellbinding 12th-century temple, Angkor Wat, on the banks of the Ganges in the state of Bihar. A religious group, the Mahavir Mandir Trust, said that when it is completed, the £13 million (NZ$25m) project will not only be a major attraction in its own right, but will be the tallest Hindu temple in the world. As he laid the foundation stone, Kishore Kunal, the trust's secretary, told local media the temple's name will be Virat Angkor Wat Ram Mandir. "The site is blessed as Ram, Lakshman and Vishwamitra were welcomed here on their arrival by King Sumati of the Vaishali kingdom," he added, referring to Hindu deities. The location of the Indian temple, or Angkor Nagar as some are calling it, is about 40km outside Patna.Indian officials say it will stand 67m high. While the Cambodian temple was built to worship the Hindu god Vishnu, the replica will also invite worship of Shiva and other deities. 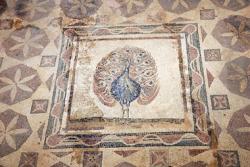 Kato Paphos - All conservation works at the House of Dionysos, at the archaeological site of Kato Paphos, have been completed. The project on the conservation of the mosaics and the upgrade of the shelter at the House of Dionysos was conducted by the Department of Antiquities in four phases. The project lasted for one year. The first phase of the mosaic conservation involved rooms 5 (geometric pattern), 6 (Phaedra and Hippolytos), 7 (geometric pattern), 8 (the Rape of Ganymede), 9 (geometric pattern). The second phase involved the mosaics found in the atrium (10, 11, 12 and 16). The third conservation phase involved rooms 2 (Narcissus), 3 (the Four Seasons), 15 (the Peacock), 13 and 14 (geometric patterns). The final phase involved conservation of the pebble mosaic floor depicting Scylla (room 1) and the mosaic floor depicting the Triumph of Dionysos (room 4).  Prior to the conservation of the mosaics, the Department of Antiquities had conducted a research focusing on the ancient manufacturing technology of the mosaics, the type of rocks used and their characteristics, as well as the composition and the characteristics of the plaster.  The large-scale works that were conducted for the shelter´s upgrade involved the replacement of the wall panels with wooden panels, the replacement of doors and windows, the internal and external painting of the shelter and the pedestrian bridges, the foreclosure of the roof, the installation of gutters, gully grates and water pipes to remove the water from the atrium and the shelter, and the disinsectisation of the shelter.

CANADA -  Fort Erie - From May 14 to June 22, a team of Wilfrid Laurier University will be carrying out the first-ever archaeological dig at Fort Erie, located on the Canadian side of the Niagara River across from Buffalo, NY, in commemoration of the 200th anniversary of the War of 1812. “Fort Erie is a high-profile site and it figured very prominently in the War of 1812 period,” says John Triggs, associate professor of Archaeology, who is leading the dig. “This is an opportunity to learn more about Fort Erie than the historical documents alone can teach us, and to get people excited about the War of 1812 and how important it is to Canada’s history.” The dig will focus primarily on the American defensive positions during the bloodiest battle ever fought on Canadian soil, a six-week siege in August and September 1814, during which the British tried to recapture the fort from the Americans. Upwards of 1,500 combatants, including soldiers, native allies and militia, died in the fighting. The team will first divide the site into a grid made up of two-by-one-meter rectangles. Approximately six to seven students will work on each area, carefully scraping away the soil to find items such as bones from food, dishes, clay smoking pipes, uniform buttons bearing regimental numbers, musket balls and artillery shell fragments, dominos and dice for gambling, and a wide array of other items that help paint a picture of camp life during the war. Triggs does not anticipate that any human remains will be found, since all bodies were likely removed from the battlefield and buried elsewhere.