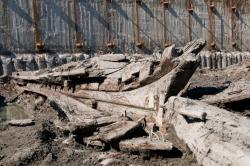 Toronto - Six metres underground near the intersection of Bathurst St. and Lake Shore Blvd. archaeologists have discovered what appears be the remains of a 19th century wooden schooner. Only the keel and the lower part of the hull remain, but experts with ASI Archaeology believe the heavily decayed assemblage of wood, unearthed on Monday, is indeed a sailing vessel, possibly dating back to the 1830s. ASI tweeted earlier today that they think the remains might be American.What we do know is that 150 years ago, the area just south of Fort York Blvd. was on the waterfront. Queen's Wharf, a long docking area used by the military stretched into the lake from near the foot of Bathurst St. A lighthouse at its tip marked what was then the only navigable entrance to the Toronto Harbour. In 1917, infill extended the land south, and Queen's Wharf was buried in place. So far at least four vessels have been discovered deep in the muck along the old waterfront: at the SkyDome and Air Canada Centre. A wooden barrel was also discovered by ASI.

Crowlink Gap - Archaeologists have been excavating the remains of an 19th Century cliff top coastguard station in East Sussex which are at risk of falling into the sea. Experts and volunteers have unearthed walls and a fireplace, as well as bullets, buttons and clay pipes during the dig at Crowlink Gap. The coastguard station opened in 1830s but it was abandoned 100 years later because of erosion. 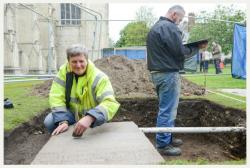 Gloucester - Human remains and a 17th century gravestone have been found in the grounds of Gloucester Cathedral. According to site manager Kath Crooks, because of the previous use of the area, finding human remains was not really a surprise."What was surprising though was how shallow some of these remains were," added Kath. "Some of them we are finding just 20cm below the surface." Until now no significant archaeological deposits have been found above a depth of approximately 60cm below existing ground level. 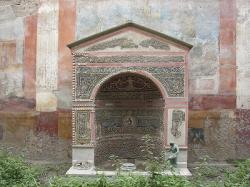 Pompei - The House of the Small Fountain, one of the most elegant residences of the ancient city of Pompeii, has reopened after restoration. The house faced Via di Mercurio, a few steps from the Forum, and was named after the fountain-nymphaeum placed in the garden and adorned by refined mosaics.
https://www.agi.it/en/italy/news/pompeii_s_house_of_the_small_fountain_reopens-201505062059-epp-rt10214

Montana - An unmanned aircraft system (UAS) was used by Bureau of Land Management rangers to photograph the Henry Smith archaeological site in Montana’s Hi-Line District, following a controlled burn of some 320 acres of land in the area. “This was the first use of a (UAS) by the BLM to obtain imagery and data in relation to cultural resources in the Northern Plains,” Josh Chase, Hi-Line District archaeologist,” said in a statement reported in The Billings Gazette. The removal of vegetation from the site allowed scientists to get a clear view of Avonlea-period complex (A.D. 770-1040), which includes anthropomorphic and zoomorphic stone effigies, stone cairns, drive lines, and stone circles. Avonlea-period hunters may have used the structures in rituals related to bison hunting and butchering. “The project will allow BLM to better study, document and manage this unique location,” Chase said. Temperature sensors were placed in mock cultural sites to measure the maximum temperature of the grass-fueled fire, and to study its effects bone and stone remains. This will help scientists understand how fire interacts with cultural resources.