Viminacium - Coal miners in Serbia recently dug up an unexpected surprise: three probable Roman-era ships, buried in the mud of an ancient riverbed for at least 1,300 years. The largest is a flat-bottomed river vessel 15 meters (49 feet) long, which seems to have been built with Roman techniques. Two smaller boats, each carved out from a single tree trunk, match ancient descriptions of dugout boats used by Slavic groups to row across the Danube River and attack the Roman frontier. The Kostolac surface mine lies near the ancient Roman city of Viminacium, once a provincial capital and the base for a squadron of Roman warships on the Danube River. When the Roman Empire ruled most of Southern Europe, the Danube or one of its larger branches flowed across the land now occupied by the mine. The three ships lay atop a 15-meter- (49-foot-) deep layer of gravel, buried under seven meters (23 feet) of silt and clay, which preserved them for centuries in remarkably good condition—or did until the miners' earthmoving equipment dug into the steep slope to excavate for the mine. The large ship had a single deck with at least six pairs of oars, along with fittings for a type of triangular sail called a lateen sail. It would have carried a crew of 30 to 35 sailors, and apparently it had a lengthy career: traces of repairs to the hull suggest a ship with some miles under it. Iron nails and other iron fittings held the ship's timbers and planks together, and they've survived for centuries thanks to the silt and clay that sealed the ship away from oxygen and microbes. By contrast, the dugout longboats were much simpler craft. Korac described them as "rudimentary," although one had carved decorations on its hull. 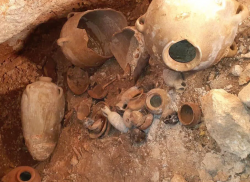 Hindaza - A Bronze Age cemetery has been discovered in the occupied West Bank village of Hindaza near Bethlehem, the Palestinian Ministry of Tourism and Antiquities has announced. A statement from the ministry explained that a local resident found the site while he was digging foundations for his home. When the homeowner contacted the Bethlehem Department of Antiquities, staff went to the site immediately. Excavations confirmed that it is the location of a cemetery that dates back 3,200 years to the Bronze Age. Archaeologists conducted an extensive search of the site to identify and examine the materials that were found. Priceless bronze and copper objects have been unearthed. The ministry stressed the importance of preserving the site for further investigation.

Auckland Castle - Excavations at Auckland Castle, County Durham, have discovered a long-lost 14th-century chapel associated with the influential Bishop Bek. Historical records document the construction of the chapel in the early 1300s. They describe it as a large building, ‘sumptuously constructed’ – reflecting the status of Anthony Bek, who was Prince Bishop of Durham from 1284 to 1310, and an extremely powerful figure in medieval Britain. Several years of excavations uncovered a huge building: 12m wide and 40m long internally, with walls 1.5m thick. Other discoveries, including the bases of huge stone columns inside the building, buttresses along its side, and even part of the floor, confirmed the identity of the building as the medieval chapel. Several beautiful artefacts were discovered that reflect the high-status ecclesiastical occupation of the site, including two book clasps, an enamelled mount possibly depicting St Cuthbert, and what is believed to be a part from stained-glass working equipment, made from extremely rare baleen (whalebone). A few examples of imports from continental Europe were also found, including the enamel band of a liturgical vessel from Limoges, and a wine glass with shell decoration of Iberian design. Archaeologists and architects have used the in-situ remains discovered during excavation, the geometry of the fragments of carved stone recovered, documentary sources, and insights from comparable buildings to create a reconstruction drawing of the chapel as it would have looked in the 14th century: a huge double-storey timber-roofed structure with enormous decorated stone pillars, buttresses, vaulted ceilings, and stained-glass windows.

- Guildford - A team of rail workers have discovered a small cave believed to be from the 14th century. Engineers were fixing a landslip near Guildford in Surrey when they found the suspected medieval shrine. Archaeologists believe it may be linked to the Chapel of St Catherine, the ruins of which are on a nearby hill. The cave is made up of several sections between 30cm and 70cm high but may have been much larger in the past. Inside, experts found evidence of writing and other markings in the ceiling. The cave roof is covered in black dust, thought to be soot from lamps, and the remains of two firepits were also spotted. A spokesman from Archaeology South East said: “The cave contained what appear to be shrines or decorative niches, together with carved initials and other markings. “The old name for St Catherine’s Hill is Drakehull ‘The Hill of the Dragon’, so this has obviously been a site of ritual significance long before the construction of the church on the top of the hill in the late 13th century.

PEROU - Huanchaquito - But, no matter how viscerally disturbing, that awful sacrificial event was dwarfed by what was found starting in 2015 at the Huanchaquito (pronounced wan-cha-kee-toe) Las Llamas site in northern Peru, near the ancient Chimu people’s capital, Chan Chan. Archaeologists who converged there discovered the remnants of a staggering official act of 15th-century brutality. Over several years of investigation, scientists uncovered the combined skeletal remains of 269 young boys and girls between the ages of five and 14, three adults, and 200 juvenile llamas (the body count is expected to grow as the dig continues). The chests of many of the children and animals were cut open and their hearts presumably removed in what was thought to be a mass sacrifice to the gods of a now extinct religion, National Geographic magazine reported in its February 2019 edition that I recently read. Scientists studying the site believe that the large sacrifice may have been prompted by a huge El Nino, an equatorial band of ocean warming, which at the time caused devastating rainstorms, floods and ruined crops, possibly threatening Chimu survival.