Londres - Archaeologists working on the Crossrail building site in North Woolwich say they have uncovered evidence of people living on the Thames Estuary some 9,000 years ago.  They unearthed a Mesolithic tool making factory at the tunneling site, and unearthed 150 flint tools. Lead Archaeologist Jay Carver said: "This is a unique and exciting find that reveals evidence of humans returning to England and in particular the Thames Valley after a long hiatus during the Ice Age." "It is one of a handful of archaeology sites uncovered that confirms humans lived in the Thames Valley at this time." "The concentration of flint pieces shows that this was an exceptionally important location for sourcing materials to make tools that were used by early Londoners who lived and hunted on Thames Estuary islands."

Laodicea - Excavations in the Aegean province of Denizli’s ancient city of Laodicea have revealed 1,900-year-old huge columns seven meters underground. The columns were found in the area known as the northern agora, one of the oldest faith centers in Anatolia.  The head of the excavations, Professor Celal Şimşek, said the northern agora had been discovered last year and they were continuing restoration and conservation work there. He said the area was one of the largest agoras in Anatolia. “The columned galleries here are in a rectangular shape on an area of 35,000 square meters. We previously revived the columned galleries that we call the eastern porch. This year we found the extension of these columns seven meters underground. They were in the same condition as when an earthquake ruined them. The columns date back to 1,900 years ago. Dust erosion and residue have filled the earth here and preserved the columns.”  Şimşek said their goal was to finish the excavations by the end of the year and to revive the columns in the beginning of the next year. He said the ancient city of Laodicea had served as a religious center. 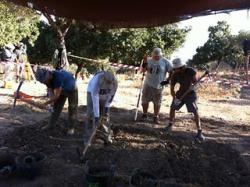 Shikhin -  A team of archaeologists from Israel and the United States have unearthed the ancient Galilean village of Shikhin, mentioned in the writings of historian Flavius Josephus as one of the earliest Jewish settlements in the area. So far they've uncovered the remains of a synagogue, residences and evidence of extensive pottery production. Prof. Aviam says their findings will help historians understand more about the ancient Israelites who lived in the lower Galilee during the early years of Christianity. "Shikhin is one of the two earliest names that we have in the Second Temple period," Aviam said.  The village was abandoned around the mid-fourth century A.D.

Perperikon - A bronze plate with a unique inscription from the 14th Century CE, believed by archaeologists to have been part of the armour of an Ottoman commander, has been found at Bulgaria’s Perperikon site.  Archaeologists see the find as a key to establishing more about the events at the time that the site was under siege. In 1361, Perperikon was captured after an intensive siege by the Ottoman Turks. Archaeology professor Nikolai Ovcharov said that the find was something unique, containing the earliest Ottoman inscription found on the territory of today’s Bulgaria. He said that unfortunately, the inscription was incomplete, but the words suggested that it was mounted on the helmet or the armour of a prominent Ottoman military commander.  It took a little more than a month for archaeologists to decipher the text on the plate.  The inscription was written in the Ottoman Turkish language and the translation indicates that jihad, holy war, leads to eternal life. Also discovered were a number of rare coins from the time of the second Ottoman sultan Orhan Gazi I. The finds indicate that Perperikon was one of the first objectives of the Ottomans after their entry into Europe. 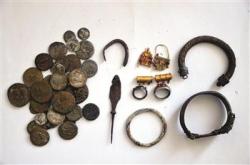 Kozluk - A villager in the southeastern province of Batman’s Kozluk village, Mahfuz Nazar, has found 50 pieces of ancient artifacts in the ruins of a barn, which he set on fire in order to build a larger barn. The artifacts were found in a stone chest and include a wristband, coins, a silver bronze and glass ring and an earring. The artifacts are estimated to date back to the Roman period. Nazar delivered the artifacts to the Batman Museum Directorate in order to keep them away from treasure hunters. Now the museum will assess the value of the ancient pieces. 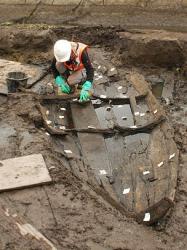 Loddon - The remains of a boat which could be more than 600 years old has been discovered by a team excavating a new drainage dyke in Norfolk.  The oak timber remnants, dated circa 1400, were found near Loddon during work on the Broadland Flood Alleviation Project (BFAP) along the River Chet.  Archaeologist Heather Wallis said: "No boats of this date have previously been found in Norfolk." She added it was a "unique opportunity" to "record a vessel of this type". Ms Wallis said the boat is "particularly significant" being located within the Norfolk Broads. "This has had a strong reliance on water transport and related industries, particularly since the creation of the Broads by peat digging in the medieval period. "We think it dates between 1400 and 1600 AD and is very well preserved. It might have been used for carrying lighter good on the river."