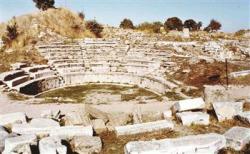 Troie - Archaeologists excavating the ancient city of Troy in Çanakkale say it will still take two or three more centuries for it to be unveiled in its entirety. Currently, Troy to have a museum. Troy has been under excavation for 150 years by five different archeologists. “When digging first began in the soil of Troy, in 1863, the excavations were directed by Frank Calvert,” Aslan said. “It was later continued by German archaeologist Professor Manfred Osman Korfmann, in 1988. During that time the excavation area underwent huge changes.” Excavations at the site have also been carried out by foreign institutions. Germany’s Tübingen University has been conducting excavations since 1988, first headed by Professor Korfmann and then taken over by Professor Ernst Pernicka in 2005. The university halted excavations due to of financial problems in 2012. In 1996 the area was turned into a national park, and in 1998 it was added to the list of UNESCO world heritage sites. Noting that it is possible to excavate the ruins of Troy for another 300 years, as many parts of the site are still yet to excavated.

USA - McClellanville  - An archaeological dig started with federal stimulus money at what was a colonial rice plantation is continuing three years later, now with the help of volunteers.  On Friday, they wrapped up another weeklong dig at the Hampton Plantation State Historic Site on the Santee River between Charleston and Georgetown.  Since they began in 2010, state archeologists and about 60 volunteers have dug into history over hundreds of square feet of what is thought to have been the slave row at the plantation off U.S. 17.  They have found evidence of the foundation of one, and most likely two, slave houses along with artifacts ranging from a tea pot thought to date to the 1700s as well as a coin from the same period. The coin has a hole in it and was likely used for a necklace or ankle bracelet.  The main attraction at the site is the large white plantation house owned by five generations of the Horry-Rutledge family from the 18th century until 1971 when the state acquired it.

CHINE – Baoji - Archaeologists in northwest China's Shaanxi Province said Sunday that one piece of thigh armor and two pieces of upper-body armor dating back 3,000 years may be the oldest pieces of bronze armor ever unearthed in China. The announcement was made after experts studied the artifacts retrieved from the tomb of a nobleman from the West Zhou Dynasty (1046 BC - 771 BC) in Shigushan Mountain of Baoji City. Liu Junshe, head of the excavation team, said the discovery filled in a blank in China's early military history, as excavations of pieces of armor forged during or prior to the Qin Dynasty (221 BC - 206 BC) have been rare.  "The material of the 'armor' on the famed Terra Cotta Warriors has long been a mystery, but the pieces of armor found this time were forged hundreds of years prior to the Qin Dynasty-era underground army," Liu said.  Liu said the cuisse, or piece of thigh armor, was 29 cm in length and tube-shaped, while the two cuirass pieces, or upper-body armor pieces, measured 23.5 by 10 cm and 40 by 21 cm. Both had mortises to connect to each other or with the leather parts of the armor.  A bounty of bronze weaponry, wine vessels and other sacrificial objects were also unearthed along with the pieces of armor, suggesting that the tomb owner had been a high-ranking aristocrat and general. The tomb cluster in Shigushan Mountain was discovered last year by some local farmers. Archaeologists found a wine vessel in another tomb. After being excavated, it was found to contain the oldest wine ever found in China. 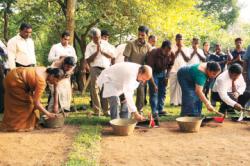 Hambantota - The Archaeology Department has prepared an archaeology management plan for the Naigala Viharaya in the Hambantota district. The plan aims to establish methodologies to preserve, conserve and maintain ruins of Naigala Viharaya. Naigala Rajamaha Viharaya is situated about one and half kilometers away from Ranna junction in the Hambantota district. Ruins provide evidence of about a large number of Buddhist monks who lived in the viharaya. A number of archeological monuments were also found during excavation by the Archaeological Department in 2009. The temple was identified as a Kala Pabbatha Vihara by examining inscriptions in the premises. Sthupas, monasteries, walls, Boodhigaras and ponds also can be seen among other ruins at the monastery complex.