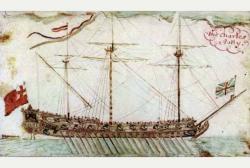 Pistil Meadow - Archaeologists could be a step closer to solving the 300-year-old mystery surrounding a shipwreck off Cornwall. In November 1721, 207 sailors lost their lives in a ferocious storm when their military transport galley the Royal Anne hit rocks and sank at Lizard Point. Just three people survived that fateful night by clinging to wreckage and among the dead was Lord Belhaven, the newly appointed Governor of Barbados. It is believed that those who died were buried, as was customary with drowned seamen at the time, in unconsecrated ground just west of Lizard Point at Pistil Meadow. Folklore has it that when nearby residents went to bury the bodies, they could not complete the grisly task within a day. When they returned the following dawn, a pack of dogs had got there first and were tucking into a gruesome breakfast. Even to this day it is said that dogs cower when passing through the meadow - perhaps in shame at the actions of their ancestors. The story of Pistil Meadow fired the imaginations of later generations, with the likes of authors Daphne du Maurier and Wilkie Collins taking an interest in the tale. Recent surveys have located a number of anomalies which could indicate mass graves at Pistil Meadow. However, these do not seem to tally with writings in the 1850s, that stated low irregular mounds chequered the surface of the field. The National Trust is working on plans for a limited excavation next summer and the information gleaned will help inform management of the site, and may allow it to be afforded legal protection as a grave. The Royal Anne was designed by the Marquis of Carmarthen, and had been launched in 1709 as a small and speedy warship, designed to be equally at home under oar and sail so as not to be out manoeuvred by pirates. The wreck was found close inshore near Lizard Point by divers in the 1970s, who first located two guns, but the wreck's identity was only clinched in the 1990s by the discovery of some silver cutlery with the Belhaven family crest. The wreck site was protected in 1993, although the savage rocks and huge Atlantic swells mean that only a handful of objects survive. Other finds have included coins, watch parts, copper bowls and cannon shot. 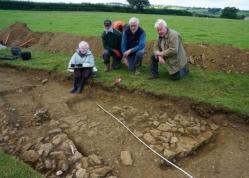 Daventry - The homes that once housed 100 people in a medieval village near Daventry were uncovered by a team of volunteer archaeologists last week. Working in a field off the B4036 Daventry-Long Buckby road members of CLASP dug into the history of Thrupp. Locals may recognise the placename as it belongs to several farms along the road, but they may not realise that a little over 500 years ago it was a busy village, with its own chapel. The settlement is mentioned in Domesday but by the end of the 15th century it was owned by the priory in Daventry. Hard economics kicked in between 1486 and 1489 and all 100-or-so residents were evicted and their homes taken down, all to make way for more profitable sheep. Now the very buildings those people lived in have been explored by members of CLASP. David Haywood, chairman of CLASP’s trustees, said: “We knew the village was in the area. We have our own geophys machine, so we used that to look at this site, and the plot was covered in lines and features. “What we had here was a medieval settlement of people living in small houses with their animals, on long thin plots of land stretching back from the road, which we discovered wasn’t in the same place as it is now! “The houses are essentially longhouses; they had dry stone walls as a sill, with wattle and daub walls, and a cruck-frame roof. 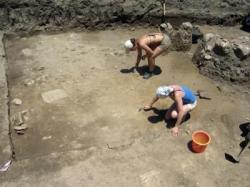 Chlorakas-Palloures - The Department of Antiquities, Ministry of Transport, Communications and Works has announced the completion of the first season of excavations at the Chalcolithic site of Chlorakas-Palloures.  The excavations are executed by a Leiden University team directed by Dr Bleda Düring.  The team consisted of 24 members with a large range of specialisations. Chlorakas-Palloures is one of a series of Chalcolithic sites located in the Paphos region, which are best known from earlier excavations at Lemba-Lakous and Kissonerga-Mosphilia.  The most famous Chalcolithic artefacts are undoubtedly the picrolite cruciform figurines. For archaeologists, the period is especially significant for the rise of social complexity that occurred prior to the emergence of international trade and metallurgy in the Bronze Age. Chlorakas-Palloures has been surveyed many times by archaeologists over the past decades. The sherds collected from its surface date the site to the Middle and Late Chalcolithic (ca. 3500-2500 BC) and show that there was a substantial settlement of about 4 ha at this location.  Land consolidation and agriculture has had significant impact on the archaeology of the site, but important remains of the period are still present. The 2015 campaign included creating a 3D model of the site, executing geophysical research with a ground penetrating radar, and the excavation of five trenches in one of the plots over which the site extends. The remains of four Chalcolithic round houses were unearthed, ranging from ca. five meters to monumental structures measuring up to approximately 20 metres.  A large range of features, including storage jars, hearths, grinding installations were found, as well as a very large raised hearth feature. The most important object found during this excavation season is a unique picrolite figurine of a quadruped with two piercings. 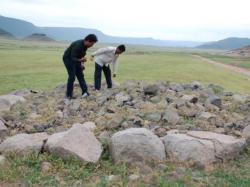 Nagarjunasagar - In a rare archaeological find, the Department of Archaeology and Museums officials have found about 200 megalithic burial sites on the Nagarjunasagar reservoir bed. The sites surfaced recently after the water level in the dam receded below the minimum draw down level (MDDL). The officials said people lived there between 1,000 BC and 2nd Century AD and they could have used the area located exactly under Nagarjunasagar reservoir bed as their community burial site. Their conclusion was based on finding a large number of stone circle burials at one spot Assistant Director of the Department of Archaeology and Museums P. Nagaraju said they could not say that there were more such burial sites under the water since some had been spotted. “We have found proof that the people had made the Nagarjunasagar backwater area, where the river Krishna and its tributary Dindi converge, their habitation some 3,000 years ago with this finding,” Mr. Nagaraju stated. Several excavations in the past had proved that civilisations had flourished on the river banks due to water availability and the finding of the burials was very close to river would support that theory again. 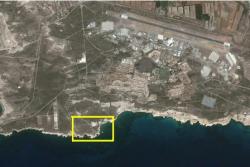 Dreamer's Bay - A team from Leicester is jetting out to Cyprus in a few days to excavate the remains of a port which dates back 1,500 years. The site in Dreamer's Bay on the southern tip of the island is under threat of erosion by winter storms. So six archaeologists from the University of Leicester are in a race against time to uncover the heritage. The 15- day expedition is being led by Simon James, professor of archaeology at Leicester. Professor James said: "We aim to conduct a rescue excavation on wave-threatened heritage remains along the shoreline." He said they comprised "a series of simple masonry buildings, probably warehouses, which appear to belong to the port which existed in late Roman/early Byzantine times, probably between AD 300 and 600." The site lies within the RAF Akrotiri base which is under UK jurisdiction.

Van - Archeologists working in Turkey’s eastern province of Van have uncovered 2,800-year-old pithos, or large ceramic storage containers, that once contained grain, oil and wine in the ruins of Çavuştepe Castle built by Urartu King Sarduri II. “The storeroom we uncovered contains 120 pithos which can store up to 36 tons of food, grain, sesame oil and wine. Each pithos has a capacity of 300 kilograms,” said Yüzüncü Yıl University Archeology Faculty Prof. Rafet Çavuşoğlu. Buried till their necks, the pithos are covered in Urartu units of measurement in cuneiform script. Çavuşoğlu is the head of excavation at Çavuştepe Castle, located in the Gürpınar district about 20 kilometers from Van city center. The castle was built by Sarduri II, who lead the Urartu Kingdom during its peak in the mid-9th century B.C.E. The castle’s walls, cisterns, the world’s first sewage system, its temples and other structures stand to this day, and has become a popular destination for tourists. Turkey’s Ministry of Culture and Tourism restarted the excavations at the site in 2014 after a 30-year hiatus. Noting how Çavuştepe Castle reflected the most colorful aspects of Urartu social life, Çavuşoğlu pointed out that they also found the wine basins where grapes grown on nearby vines were turned into wine. “This information can be found in cuneiform text around the castle as well,” he added, “Water that is brought to the castle via canals is used to grow grapes on its vines, then the grapes are crushed by feet in these basins and the resulting grape juice is then poured into the pithos and stored.”