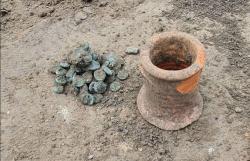 Phanagoria - Archaeologists have announced the discovery of a coin hoard in the ancient city of Phanagoria. Phanagoria was the largest ancient Greek city on the Taman peninsula and was founded by Teian colonists around 543 BC, and developed into a Greek centre of trade between the coast of the Maeotian, and the countries on the southern side of the Caucasus. The coin hoard was discovered during the third season of excavations, where archaeologists unearthed an amphora containing 80 copper staters (coins), whilst researching evidence of a destruction layer caused by fire from the 6th century AD. Archaeologists believe that the burying of the hoard could be associated with several raids by the Huns or Turks, resulting in large parts of the city being torched. Residential buildings, wineries, and public buildings perished in the fire, depositing a large amount of ash, soot, fragments of burnt wooden floors of buildings, broken dishes, and the remains of burnt grain in amphorae in the destruction layer. The Byzantine writer Procopius of Caesarea noted that Kepa and Phanagoria were “taken and destroyed to the ground by the barbarians who lived in neighbouring lands”.  Some researchers associate the events described by Procopius of Caesarea with the nomadic Huns. According to another version, the destruction of the cities of Kepa and Phanagoria, reported by Procopius of Caesarea, took place already in the middle of the 6th century, when the Avars who fled under the pressure of the Turks approached the Asian Bosporus: a message about this event is found in Evagrius Scholastica’s “Church History”. The Turks themselves appear on the Bosporus in the AD 570s. A closer inspection of the coins reveals that they are mainly copper staters of the Bosporan kings of the late 3rd – early 4th century AD. The last minting of the Bosporan coins was around AD 341, however, a huge mass of staters made of cheap copper-lead alloy continued to circulate in the Bosporus for several centuries, whilst the role of “expensive” money was played by Byzantine gold.

Dunnicaer - A precariously perched site on Stonehaven’s southern cliff edges has been confirmed as the site of the earliest Pictish Fort ever found. Carbon Dating techniques have revealed that the ruined fortress pre-dates the world famous Dunnottar Castle by a considerable margin. The sea stack to the south of Stonehaven, known as Dunnicaer, was excavated by archaeologists from the University of Aberdeen in April. With the help of experienced mountaineers they scaled the rocky outcrop, which measures at most 20 by 12 metres and is surrounded by sheer drops on all side.

Jerusalem - Archaeologists announced on Tuesday that they had uncovered a 2,700-year-old toilet, and one made for a single household, not a communal latrine. Israel's Antiquities Authority (IAA) reported archaeologists uncovered a smooth, carved limestone toilet in a rectangular room in a large residence looking out on what is now the Old City in the Armon Hanatziv neighborhood of Jerusalem. The carved limestone block with a hole in the center sat atop a deep septic tank measuring around 1.5 by 2 meters (roughly 5 by 6.5 feet). The IAA also said that materials found in the tank, such as animal bones and pottery, could provide insights on the dietary habits, lifestyles or even diseases of the era. The residence where the toilet was found featured stone columns and a garden with orchards and plants, further indicators of the privilege of those who sat on the limestone throne. In the ancient loo, there were also 30 to 40 bowls which Billig speculated could have been used for aromatics such as oil, incense or other methods of the era to neutralize unpleasant smells.

Gloucester- An 1,800-year-old figurine has been uncovered by archaeologists on a dig in a city centre. It is one of many finds at the site dating back to Roman times, and is believed to be a depiction of Venus, the Roman goddess of love. The archaeologists believe the 17cm-high figurine would have been worshipped as a religious icon. It seems certain the figurine is from this period and is a representation of Venus. She would most likely have stood in someone's home shrine for the goddess. The statuette was excavated alongside evidence of the city's ancient heritage, including the stone foundations of a number of buildings which may have formed part of a large Roman suburb outside the city walls.

Yumuktepe Hoyuk - An ancient structure with a jar, numerous pots, and food fossils, dating back to some 4,500 years ago, were unearthed at the Yumuktepe Hoyuk (tumulus) in Turkey's southern coastal city of Mersin. Yumuktepe stands out as one of the oldest settlements in Anatolia with its history dating back to 7,000 BC. There were many potteries inside the building. These pieces belonged to one type of product. These bowls are all the same, mass-produced. There were around 700 bowls in this building. This is a big place for a standard family or restaurant. We think that this is a place where public or ceremonial meals are held or food is distributed to the public.

GALLES – Blaenau Gwent - A series of prehistoric huts which could date back 5,000 years have been unearthed in Blaenau Gwent. Aberystruth History and Archaeological Society made the discovery during the final year of their four-year excavation and investigation into sites in the Cwmcelyn Valley near Blaina. 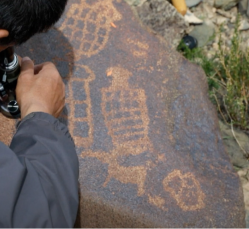 Namtso Lake - A scientific research expedition has uncovered a mysterious treasure trove from an early nomadic culture in Namtso Lake area on the northern Qinghai-Tibetan Plateau. Since its inception on August 5, the expedition team has conducted a comprehensive and systematic survey of cave rock paintings and rock carvings in the wilderness of northern Tibet in Namtso and its surrounding areas. Substantial evidence has revealed the rich historical implications of exchanges between nomads of the plateau and other ethnic groups. This time we have newly discovered that the styles of many rock paintings not only contain early Tibetans', but also early Hans', and we have also discovered inscriptions of Chinese characters. In addition, there are also Central Asians' style, indicating that Namtso Lake is an important passage of the ancient Silk Road and integrates different cultures," said Professor Tang Huisheng. Experts have also discovered many ancient remains of stone tools, stone tombs, and sacrificial sites in northern Tibet, which is of great significance for understanding the early nomadic culture in northern Tibet.

Deiningen  - Archaeologists in Bavaria have unearthed two exceptionally furnished graves from the 6th century each containing a find unique north of the Alps: an ivory comb decorated on both sides with animal scenes, and a red ceramic bowl made in what is now Tunisia. The comb was found in the grave of an adult man about 40 to 50 years old at time of death. He was a warrior, buried with a full complement of weapons including a long sword, a lance, a shield and a battle axe. A bronze basin was also unearthed in the grave. In a pit next to the grave archaeologists found the skeletal remains of a horse, and the presence of a pair of spurs and the remnants of a bridle found inside the man’s grave indicate he was the rider of the horse buried in the grave next to him. At the foot of the warrior was a bag made of an organic material. Most of it has decomposed, but there are some remains. That bag was the 6th century version of a toiletries bag, containing a pair of scissors and the ivory comb. The second grave contained the remains of an adult woman who was around 30 to 40 years old when she died. She was buried with jewelry, food offerings, including eggs, and a weaving batten, a tool used to beat the weft on upright looms. Pottery of local manufacture was also found in the grave. To the left of her left elbow was a bowl buried upside-down, but it was not local. On the contrary, it had traveled far to accompany this woman to the afterlife. Cleanly broken in two pieces but complete, the bowl is an example of high-quality African red slip ware, pottery characterized by a thick ochre/red slip that coats in the interior, and often the exterior, of many forms of vessels. African red slip ware was in active production in what is now Tunisia from the 1st to the 7th century A.D. and was highly sought-after all over the territory (and later former territory) of the Roman Empire. The inside of the bowl is stamped in the center with a square cross, a design struck during production of the ceramic. After market, some loops and what look like sixes were scratched around the rim of the bowl. They could have been random doodles, or they may have had linguistic or religious meaning, an unknown form of runic script, for example.

Aptera - A group of small statues portraying the twin gods Artemis and Apollo  had been found in the systematic excavation that took place at a archeological site at the ancient city of Aptera. The statues are beautifully rendered and well preserved for their age — dating all the way back to the beginning of the second century. It is believed that they were imported from artistic centers outside Crete. Artemis, the protector goddess of Aptera, is made of copper, while her twin brother Apollo, is made of marble. The goddess stands on an elaborate box-shaped copper base and is depicted in intense stride, wearing a short, slender chiton, and she is ready to shoot. Although Apollo is depicted in a more modest way, his attitude conveys internal tension.