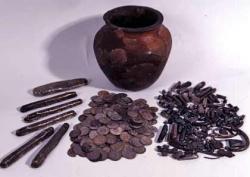 Chester Castle - In November 1950, workmen digging near Chester Castle found a small Chester-type pot containing 547 coins, 27 ingots and 120 pieces of cut-up hacksilver jewellery, buried in the ground between AD 965-970. At the time of the burial, Chester was inhabited by Anglo-Saxons, Anglo-Scandinavians and Hiberno-Norse groups. More than 1,000 years later, the hoard is about to go on public display for 11 days at a branch of bank Santander in the city. The coins are inscribed with marks suggesting they were minted in Chester, Southampton, York, Bedford, Huntingdon and Oxford, adorned with the names of the Saxon Kings Aethelstan (925-939 AD), Edmund (939-936 AD), Edred (949-955 AD), Eadwig (955-959 AD) and Edgar (959-975 AD).

ROYAUME UNI – Islay - Pigs foraging along a Scottish coastline have unwittingly uprooted the earliest evidence for a remote population of hunter-gatherers. The uprooted items, stone tools that have been dated to around 12,000 years ago, are described in the latest issue of British Archaeology. The tools were discovered on the east coast of the Isle of Islay, Scotland, and include sharp points -- likely used for hunting big game -- scrapers and more. "Previously, the earliest evidence (for humans at Islay) dated to 9,000 years ago, after the end of the Ice Age,” Mithen said. “The new discovery puts people on Islay before the Ice Age had come to an end at 12,000 years ago.” Mithen and Wicks were already working on a project in Scotland when they were informed of the pigs’ finds. They investigated the site, Rubha Port an t-Seilich, as well as nearby areas, and found layers of many other artifacts dating to different time periods. These included remains of animal bones, antlers, spatula-like objects, crystal quartz tools, and what was once a very well used fireplace. Based on the age of the tools and their craftsmanship, the researchers suspect they belonged to the Ahrensburgian and Hamburgian cultures. These people originated in central Europe, with most coming from what is now northern Germany. 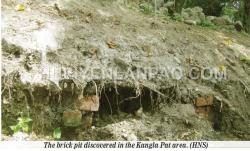 Kangla Pat - A brick pit, probably belonging to the time of Manipur's Maharaj Chandrakirti (1850-1886), measuring about 4 ft in depth has been found close to Kangla Santhong (gate) here. Manipur State Archaeology is now making efforts to determine the origin of the pit and the actual period it belongs to, official sources said on Tuesday. The strange pit was discovered at a site of Kangla Pat where its stone pitched retaining wall is currently undergoing renovation in view of the upcoming Sangai Festival 2015 . Officials said the pit was found just 130 mt from the Kangla gate. They said this pit probably belongs to the period in Manipur ruled by Chandrakirti Maharaj. The renovation work at the site has been halted as the State Archaeology Department is preparing to find out unknown location.

ROYAUME UNI – Lincoln - The discovery of a Roman grave in Lincoln seems to suggest the landscape of the ancient city may have stretched further than is currently believed. Archaeologists have found the skeleton of young woman during a dig in a garden a few doors down from the Coop garage in Riseholme Road. It is the most northerly burial from the era ever excavated in Lincoln, and now experts are searching for clues of any Roman buildings that may have been in the area of Ermine Street, the ancient route from London to Lincoln and York. Roman burials were always outside city boundaries – Newport Arch is the northern gate of Lindum Colonia which is now known as Lincoln.

Bouldnor Cliff - A Stone Age settlement is hidden underwater off the south coast of England. We joined the divers racing to recover its secrets . Since the site was discovered in 1999, the excavations at Bouldnor Cliff have uncovered an 8,000-year-old settlement. The people who lived there seem to have possessed a level of technology 2,000 years ahead of the norm for the period. BBC Britain and BBC Earth joined the archaeologists studying the settlement, who are trying to uncover its secrets before the sea washes them away forever.