Kuhbanan - In addition to 205 relics and historical sites so far been identified in Kuhbanan county, a survey suggests that the region was once one of the human settlements in the Paleolithic era and it was a passageway for human beings who went towards eastern Iran and eastern parts of Asia. The newly-identified artifacts include [archaeological] sites and hills, [ruined] buildings, mills, water reservoirs, remains of ancient villages and houses, towers, aqueducts, mines, stone graves, and shelters that date back to different periods of history. Talking on the survey, Khanipour said some of the identified relics and sites date from Parthian, Sassanid, and [early] Islamic eras.“Regarding historical sources, and [travelogues by ancient] travelers, the development of qanat [subterranean aqueduct] networks caused the creation of various villages in the in Kuhbanan region when growing population and urban development triggered the development of mosques, temples, towers, bazaars, residential houses, most of which being documented in the survey,” Khanipour explained. In February 2020, teams archaeologists and cultural heritage experts co-led by Iranian archaeologist Nader Alidad-Soleymani and German Professor Peter Pfalzner started another survey in Kerman to record evidence about previously excavated sites in the counties of Jiroft, Kahnuj, Anbarabad, Faryab, Rudbar, Qalehganj, and Manujan. In 2008, Piotr Steinkeller, professor of Assyriology in Department of Near Eastern Languages and Civilizations of Harvard University, announced that Jiroft is the lost ancient city of Marhashi. Steinkeller presented his theory during the first round of an international conference on Jiroft civilization, held in Tehran on May 5 and 6, 2008. Marhashi, (known in earlier sources as Warahshe) was a 3rd millennium BC polity, which was formed east of Elam on the Iranian plateau. Big and sprawling Kerman Province is something of a cultural melting pot, blending various regional cultures over time.

Jerusalem - A new study carried out on pottery items uncovered in the Tomb of the Patriarchs in Hebron suggests the cave, where according to tradition, Jewish patriarchs and matriarchs were laid to rest, was used and visited as a pilgrimage site during the First Temple Period, around 2,700 years ago. The results of the study were published in the latest issue of the Israel Exploration Journal. Its findings could help bridge the gap of 1,600 years between the time the cave is thought to have been first used and the building of the monumental structure erected under King Herod the Great in the first century BCE. No archaeological excavation has ever been conducted at the site, which is considered the second holiest after the Temple Mount in Judaism and also one of the holiest in Islam. The pottery dates back to around the eighth century BCE, which brings us much closer to the tradition of the story about the cave presented in the Bible. The items – fragments from a bowl, a chalice, a jug and a jar – recently underwent several compositional analyses, including petrography. Petrography is the study of rocks and minerals. “We do not know for sure what was the function of the cave during the First Temple period, but we can infer that people came to visit it from different locations,” Ben-Shlomo said. “Moreover, a question stands about whether new people continued to be buried there. However, there seems to be a continuation of considering this place as a holy place, as a pilgrimage site, visited from different parts of the country.” 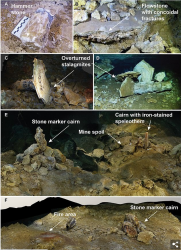 Tulum - Archaeologists in Mexico have found some of the oldest mines in the Americas and 13,000-year-old human remains, after exploring an underwater area in the Yucatan peninsula. In a paper published in the journal Science Advances on Friday, the scientists told of finding ocher mines in underwater caves.  They had been intrigued by the 2007 discovery in the caves of a young woman they named Naia, who died 13,000 years ago, and wanted to know more about the circumstances of her death. The caves, near the resort of Tulum, were flooded about 8,000 years ago due to rising sea levels.  They detailed the recent discovery of about 900 meters of ocher mines, with the remains of human-set fires, stacked mining debris, simple stone tools, navigational aids and digging sites. The evidence suggested humans went into the caves around 10,000 to 13,000 years ago, seeking iron-rich red ocher, which early peoples in the Americas prized for decoration and rituals. The early miners apparently brought torches or firewood to light their work, and broke off pieces of stalagmites to pound out the ocher. They left smoke marks on the roof of the caves that are still visible today.

CHINE -  Xi'an - Archaeologists in northwest China's Shaanxi Province have unearthed a well-preserved, large family cemetery site of an ancient Chinese official in the Sui Dynasty (581-618), the provincial institute of archaeology said Friday. The site, which consists of seven tombs, surrounded by a large square trench, was found in a village in the Xixian new area of Xi'an, the provincial capital. Measuring 147.7 meters in length and 138.5 meters in width, the site covers an area of more than 20,000 square meters, and is so far the largest and best-preserved Sui cemetery site, according to Li Ming, a researcher from the institute. The owner of the largest of the seven tombs has been identified as Wang Shao, a high-ranking military official during the Southern and Northern Dynasties (420-589) and the reign of Emperor Wendi of the succeeding Sui Dynasty. A total of 67 pieces and sets of burial objects, including figurines of warriors, tomb-guardian creatures, and clay hogs and chickens, were discovered in Wang's tomb, which had been badly raided, Li said. Archaeologists also found a few fragments of Wang's epitaph that were beyond restoration. The findings will greatly enrich the archaeological materials for research on the characteristics of family cemeteries, as well as burial customs and rules during that time, Li added.

Porto Pidocchio  - Two professional divers exploring the waters off the coast of northern Italy have discovered the wreck of a large wooden ship thought to date to the 16th century, reports Vincenzo Bruno for Italian news site Notizie. Investigation of the find is ongoing, but a statement from the Archaeology Superintendency of Italy’s Ministry for Cultural Heritage & Tourism suggests the wooden hull may represent the remnants of a much sought-after galleon that sank in the area in 1579. Named the Santo Spirito and Santa Maria di Loreto, the ship was one of the largest Italian merchant vessels of its time. If the ship’s identity is confirmed, it will be the first Renaissance-era vessel discovered with its hull timbers still intact, reports Diver Net. Italian officials say they expect to find ceramics, coins, navigational instruments, cannons and anchors upon conducting further exploration of the wreckage.

Raleigh - Officials working to remove a Confederate monument from downtown Raleigh, North Carolina, discovered an unopened time capsule in its base. Now, 126 years after it was buried underneath the Confederate Soldiers Monument on the grounds of the North Carolina State Capitol, archaeologists and conservators from the state Department of Natural and Cultural Resources (DNCR) have revealed what's inside: a stone believed to be taken from Gettysburg, a pair of buttons and a strand of what is likely horse hair. But most notable: According to a list of items buried in the small wooden box published in the Charlotte Democrat on Friday, May 25, 1894, the buttons belonged to Gen. Robert E. Lee and the strand was plucked from his horse, Traveller.

MONGOLIE – Avraga - New research by archaeologists from the Australian National University has suggested that Avraga, in Eastern Mongolia was the winter home (or ordū) of Genghis Khan. Avraga (originally called Aurag, meaning source in the Mongolian language) was located at the confluence of the Kherlen and Tsenker River, in present-day Khentii province, Mongolia. Under Kublai Khan and his successors, it became a shrine for the cult of the Genghis Khan. The ANU archaeologists conducted a series of radiocarbon dating studies that showed that Avraga was occupied during the lifetime of Genghis Khan and extended beyond the time of his son Ogedei Khan (the 2nd Khagan). Dr Li Narangoa from the Australian National University said that Genghis Khan had at least four ordū. “The historical documentation appears to indicate the one at Avraga was his main camp, probably for both Spring and Winter, so this research is significant because it provides the natural science-based proof for the findings of historians,” she says. The researchers also found that the elites in Mongol society ate roughly the same diet as the commoners – mainly meat and animal products – despite having access to a variety of foods.

Sibérie - Archaeologists have discovered that a 2,600-year-old mummified body they found 32 years ago isn't a boy like they first thought - but a girl! She's thought to be part of the Scythian group tribe, ancient tribes of warriors who travelled from place to place. This particular mummy was first found by archaeologists in 1988. One reason they assumed the body was male was because of the amount of weapons in the grave: a bow made of birch, a quiver containing ten arrows with wood, bone, or bronze tips, and an axe. Usually at female burial sites they expect to find things things like beads and mirrors. But now they think she was buried with many weapons because she was a warrior who "had not yet reached the age of 14 ". She was found dressed in a long fur coat, a shirt, trousers or a skirt, and a leather cap decorated with a red spiral. Archaeologists and historians were very excited by the news, because it not only helps them learn more about the Scythians but also supports the idea of the Amazons, a race of female warriors that appears in Greek mythology. This isn't the first time there have been signs that the Amazons were not entirely mythical. When the ancient Greeks first came across the Scythians, they wrote about the impressive sight of the Scythian women riding into battle. A team excavating a fourth-century B.C. burial mound in western Russia recently found remains of four other real-life Amazons. Two of the women were buried with horse tack and weapons, and one of them had her legs positioned as if she were riding a horse. "We can certainly say that these two women were horse warriors," says team leader Valerii Guliaev of the Russian Academy of Sciences' Institute of Archaeology, "and we suppose that all four women in the grave were warriors."