Knittlingen - The skeleton of a man was discovered alongside the skeleton of a headless horse by archaeologists at an ancient cemetery in the city of Knittlingen in Germany.The human remains belonged to the owner of the horse; the burial was made about 1,400 years ago and belongs to the era of the Merovingian dynasty (A.D. 476–750). Archaeologists do not know why the horse was buried beheaded, but perhaps it was part of the funeral ceremony, and the horse was placed nearby as "grave goods" and not as a sacrifice. It is reported that the head of the animal was not found near the burial site. Next to the man, the remains of seven more people who lived at the same time period were found, among them a woman buried with a golden brooch.

Germanicia - The seventh stage of archeological excavations in the ancient city of Germanicia in Turkey's southeastern province of Kahramanmaraş has come to an end. During the excavations, the remains of 1500-year-old architectural structures, baths, and a mosaic were found. The mosaic, measuring 50 square meters, features an open-air feast where three women are dancing to music. The director of Kahramanmaraş Museum Safinaz Acıpayam gave information about the excavations. She said that the mosaic was found as a continuation of a previously found mosaic in which there were hunting scenes.   “We think the [newly discovered] mosaic probably describes an open-air banquet before the hunt was held. There are two couples sitting in the middle center and there are three women dancing accompanied by music. There is also the figure of a barefoot little boy climbing a fig tree,” she added. 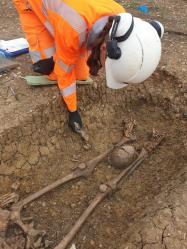 Fleet Marston - Dozens of beheaded skeletons have been found in an archeological dig that uncovered part of a Roman town. The excavation at Fleet Marston, near Aylesbury, was carried out amid work on the HS2 high-speed railway. Around a tenth of the 425 bodies archaeologists unearthed in a large cemetery at the site had been decapitated. Skulls had been placed between the legs or next to the feet of the dead in several cases. Archaeologists said this could be a “normal, albeit marginal, burial rite” in the late Roman period – or a sign these bodies belonged to criminals or outcasts. A 50-strong team also uncovered dice, bells, jars, coins, brooches, and evidence of brewing. 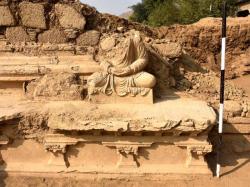 Babu Dehri - The Khyber-Pakhtunkhwa (K-P) Archaeology and Museum Department has discovered a large number of antiques and artifacts belonging to the Buddhist period of around 1,800 years back. The discovery has been made at village Babu Dehri of Swabi district of K-P and is considered as a big success in archaeological history of the province.“Finding of such a large number of artifacts from a single location, comprising around 400 monuments and a large stupa, is a big feat and is considered as largest discovery of the province,” observed Dr Abdul Samad, Director Archeology. In his message, Dr Samad said all the discoveries are around 1,800 years old belonging to Buddhist period. 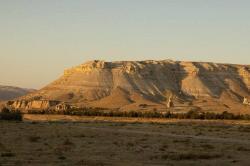 Amorium - Archaeologists in Turkey have discovered two "rare and unique" swords in a heavily fortified city from the Byzantine Empire, a new study finds. One of the swords, unearthed in a church, may have been placed there as an offering. Both iron weapons are ring pommeled swords, meaning that the pommel — a rounded knob at the end of the handle — is shaped like a ring. Ring pommeled swords were a rarity in the Byzantine, but these blades are also unique for another reason: Intriguing features on the swords distinguish "them from the ring pommeled swords of the nearby civilizations," the researchers wrote in the study. The swords are so unique, it's difficult to determine what ethnicity or mercenary group wielded them about 1,000 years ago, the researchers said. Archaeologists discovered the swords in Amorium, a Byzantine city that was an important crossroad between Constantinople, the empire's capital, and other major cities, such as Nicaea and Ancyra (modern-day Ankara). Amorium was also, temporarily, a military hotspot and became a stronghold that served as the region's first defense line against the Arab invasions, including the Arab conquest of Amorium in A.D. 838, the researchers said. Puebla - Archeologists working on the 16th-century hospital of San Roque in the city of Puebla  have discovered several human remains including pregnant women, their unborn children and at least one man who met a violent death. Inside the building, which dates back to the 16th century, the team of experts has recovered evidence of at least nine complete human skeletons and several scattered bone fragments. Some of the remains were deposited in what the experts believe was a mass grave. The skull of one particular skeleton, corresponding to a male between 40 and 45 years old, shows two injuries in the central region of the frontal bone, indicating death from head trauma. Among the skeletal remains are two pregnant women and their unborn babies. Unborn remains were also found in other areas, which the archeologists say "indicates that there were abortions inside the place and that they were thrown into the pits." The San Roque Hospital was established to serve the Spanish who came to the New World. However, the team of experts noted that while many of the human remains date back to the colonial period, some may date back to just the 20th century.

SUEDE -  Fjällbacka - A nearly 800-year-old medieval merchant ship, or cog, has been found in the Fjällbacka Archipelago in Bohuslän County, Sweden. The wreck, about ten metres long and five metres wide, was located on a muddy bottom in a shallow bay. Only a dozen wrecks from the 13th century have been found in Swedish waters so far. This one is not only the oldest in Bohuslän County, but one of the oldest in all of Europe. By analysing wood from the wreck was able to establish that it was built of oaks felled between 1233 and 1240. The analysis showed not only the age of the wood, but also the place of origin. The cog is built of trees from northwestern Germany and thus has been tied to the powerful Hanseatic League, which accounted for a large share of trade in medieval northern Europe.

Basara - An archaeologist discovered a stone inscription with the orders passed by 10th century Kalyani Chalukyan ruler Satyasraya atop a hillock called Dasthagiri Gutta in Basara town of Nirmal district. B Ram Mohan, a member of Kotha Telangana Charithra Brundam, discovered the inscription on a boulder, on which Satyasraya, who also had the names ‘Satti’ and ‘Sattiga,’ had passed orders for construction of houses in that area. Satyasraya was the successor of Tailapa-II, who had established the dynasty. According to Ram Mohan, it appeared that the name ‘Ramaswamy’ mentioned on the inscription, referred to a legal officer in the kingdom. A Trishul carved below the inscription indicated that the king was an ardent follower of Shaivism at the time, he observed.