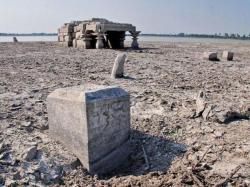 Udyasamudram - Director of Archaeology and Museums, Telangana, is planning to shift Sri Shambulingeshwara Swamy temple, built in 11-12th Century AD, that was submerged under Udyasamudram reservoir a decade ago at Panagal in Nalgonda district soon. The authorities inspected the temple recently as it resurfaced owing to water level going down in the reservoir. Assistant Director of Archaeology and Museums, P. Nagaraju, said that they have taken the issue to the notice of Director, N.R. Visalatchy, who asked him to shift all the loose sculptures found at the site immediately to Panagal Museum. He said she also directed the Engineering Department to visit the site and prepare proposals for shifting the temple. The entire Lord Siva temple will be dismantled before shifting it to another location. Despite being submerged for over a decade, the temple has remained intact. However, the archaeology officials have also found 12 pillars of another temple, which might have collapsed some centuries ago. They have also found some loose sculptures at the site which include a Nandi, Lord Vinayaka and others. The temple was located on the outskirts of Chandanapally village which was displaced after the reservoir was built. According to some inscriptions that were found in the past, Kunduru Cholas had constructed both the temple and Udyasamudram tank during 11th or 12th centuries AD.

NOUVELLE ZELANDE - Tauranga - Food storage pits dating back to before the 1800s have been uncovered in Pillans Point providing evidence of a large Maori settlement in the area. The archaeological site was uncovered during roadworks in Pillans Point. Maxwells Rd is being widened to create more car parking spaces while existing underground services are upgraded. The site was being investigated by a team of archaeologists from Opus International Consultants in advance of roadworks and they have since discovered the remnants of approximately 25 subterranean food storage buildings and evidence of a pataka - a raised food storage building. Together the features are evidence of intense occupation and industry by Maori on the Otumoetai peninsula. Tauranga City Council communications adviser Marcel Currin said the site was a 3m to 4m strip along the east side of Maxwells Rd. Kumara pits similar to those found on Maxwells Rd are apparently found quite frequently in the Bay of Plenty, however we understand none have been found in this area of Tauranga to date. Some of the pits are very large at over 8m in length and nearly 2m deep. The archaeologists tell us these are of some interest and are relatively rare with the site being evidence of a large Maori settlement. Artifacts including obsidian (volcanic glass) and fragments of stone adzes have been found in the area which will be analysed by a specialist with a report being provided to Heritage New Zealand detailing the finds. 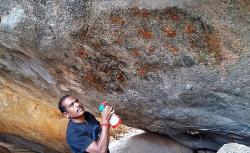 Dharmapur - The officials of Archaeology Department have discovered Neolithic period red ochre hand print rock paintings in a rock shelter on Peerlagutta, an hillock, located on the outskirts of Dharmapur village in Mahabubnagar mandal. Similar hand print rock paintings were found by the department on Pandavulagutta in Warangal district of Telangana State earlier. Assistant Director, Archaeology, P. Nagaraju said that since they have also found tools used by Neolithic man at the same spot, they came to a conclusion the area was inhabited by humans from Neolithic period (3000-1500BC). Dharmapur village is located just 7 km away from Mahabubnagar town. Mr. Nagaraju and his team also found a spring ball, parts of the red and black ware, hand-made pottery. Talking about the tools that were used by the Neolithic man, Mr. Nagaraju said spring ball was one of the main tool used by them to hunt the wild animals. They have also found some stone circles (1000 BC-2nd Century AD), one type of megalithic burial, at the same spot. Meanwhile, the locals informed the Archaeology officials they have also found paintings such as a tiger hunting deer and others inside the rock shelter, which Mr. Nagaraju, Junior Assistant, P. Balaraju were planning to visit shortly.