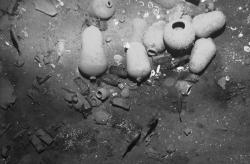 Bathonea - An archaeological excavation was launched in 2009 near Lake Küçükçekmece in the Avcılar district of İstanbul to uncover the ancient city of Bathonea, which is estimated to be 1,600 years old. The excavation is being conducted under the supervision of Associate Professor Şengül Aydıngün from Kocaeli University. In an earlier interview with the press, she had said the first two years of the project were spent doing cleaning, researching, mapping and geophysical work and that the team started digging in 2011. The early Hittite figure of a goddess and the amber necklace dating back to the Viking era were found in 2015 during the excavation. The goddess figure is estimated to date back nearly 4,000 years. The figurine, 3.5 centimeters in height, is made out of lead. The archaeologists' finding of a Viking-period amber necklace in İstanbul is considered significant as it may provide evidence for the presence of Vikings, who were said to have been hired as soldiers by the Eastern Roman Empire, in ninth-century İstanbul. About 700 Vikings are believed to have come to İstanbul from Scandinavia through Russia and, according to historians, are thought to have remained in İstanbul for about 400 years. However, the presence of those Vikings in İstanbul has not yet been proven. Thus, the recent finding of the necklace in İstanbul was greeted with enthusiasm by historians and archaeologists alike. 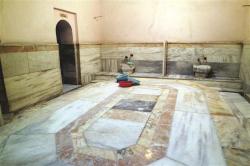 Bursa - The historical Oruçbey Bath, located in the Osmangazi district of Turkey’s northwestern province of Bursa, has been put on the market for $1.65 million. The bath was built in the 15th century in the Hisar neighborhood of Osmangazi, and one of its current owners, Arife Varol, said it was inherited by her and five other siblings from her father.   The bath was built by Oruç Bey, commander of the second sultan of the Ottomans, Orhan Gazi. Its historical tissue is still largely the same. Officials of the General Directorate for Foundations said the bath could be sold by its owners. 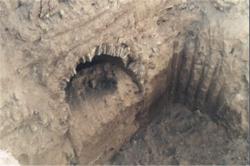 Datong - As we marvel at the Han-Dynasty treasures being unearthed at Haihunhou Cemetery in Jiangxi Province, here's another find to fascinate archaeologists. An ancient tomb has been discovered in Datong County, in northwestern China's Qinghai Province. Based on the crafting techniques of bricks and pottery found at the site, the tomb appears to be about 2,000 years old, also from the Han Dynasty. The excavation team says the deceased was a male around 40 to 50 years old, judging by his skull, though his identity is not yet known. Experts have taken bone and pottery fragments to local labs for further inspection.

Iznik - According to Doğan, Roman mosaics were discovered by the İznik Municipality during an excavation in August of last year on Afyon Street in the Beyler neighborhood. After municipal workers found mosaics depicting human faces two meters below ground level, the İznik Museum Directorate started an archeological excavation at the site and found other mosaics depicting snakes and hexagonal shapes. However, the museum stopped the excavation when it was revealed that it was on private property and demanded expropriation of the land by the government. As procedures for expropriation take a long time, the directorate covered the mosaics with geotextile material and sand in order to protect them. During road repairs and asphalting works by the İznik Municipality in recent months, some protected parts of the mosaics were covered with asphalt. 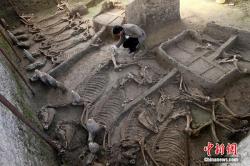 Luoyang - A group of tombs dating back to the Spring and Autumn period (771-476 BC) has been discovered in central China's Henan Province, archaeologists said on Sunday. The grouping, located in Yichuan County of Luoyang City, is composed of more than 200 tombs, eight horse and chariot pits, over 30 ash pits and more than 10 kilns. It covers an area over 200,000 square meters. Alongside the tombs, an ancient city dating back to the Han Dynasty (202 BC-220) was also discovered. Archaeologists believe the site was home to an ancient tribe more than 2,600 years ago. The tribe was one of the few in the region whose migration and time of perish was recorded. Experts will study the tribe to learn the history of migration of minorities in the central area of China.