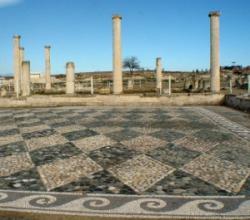 Pella - After the approval of the Central Archaeological Council, excavations at the Ancient Agora of Pella will continue for another five years under Ioannis Akamatis, Professor of Classical Archaeology of the University of Thessaloniki, according to Amna. Pella is an archaeological site which was once the thriving capital of ancient Macedonia. Apart from being a cultural and commercial hub, Pella was also a place of great historical significance, it being the birthplace of Alexander The Great and his father Philip’s kingdom. Excavations will focus on the area south of the agora, the northern stoa,the central square and the eastern wing, in search of structures earlier than the Hellenistic metropolis remains of the mid-4th century BC to the 2nd century BC. The compound of the ancient agora covers 70,000 square meters and contained multiple buildings and workshops attesting to the city’s economic strength – from ceramic and sculpture studios, to metal processing, food and perfume manufacturing, administrative offices and the city’s archive, containing the clay stamps of papyrus records. Last year’s excavations revealed a temple-like rectangular structure that will be researched further, several coins, ceramic storage vessels stamped with identifiable data and statuettes.

ROYAUME UNI - Bingley Moor - A team of archaeologists have unearthed evidence which suggests Bingley Moor used to be as warm as the South of France. The Stanbury Hill Project, a community archaeology venture, has been investigating a prehistoric 50,000 square metre site since 2008 and will share its findings with the public later this month. Project director Keith Boughey said: the site had been picked because of previous findings there, particularly relating to prehistoric rock art – known as ‘cup-and-ring-marked’ rocks. But the group discovered more than it expected, with findings dating back 8,000 to 9,000 years and up to the 1940s. Findings included charcoal, flint and chert tools, including pieces that could date from the Mesolithic period around 7000BC. There was also evidence of some form of agriculture and new examples of rock art. Mr Boughey said: “The charcoal came from a mixture of tree species that suggested a date range of 1850-3350 BC and a deciduous woodland environment in a somewhat warmer climate than today.” Work on the site finished in 2011 and the findings were taken to the university for analysis.

Alacahöyük - The head of the Alacahöyük excavations, Professor Aykut Çınaroğlu, said the reconstruction plan for the protection of Alacahöyük had been prepared by the Culture and Tourism Ministry, was in its final stage and was set to be implemented in a year. He added that some areas would be launched as first degree archaeological areas, and that they had also organized meetings to exchange views with the public about the project that will shape the future of Alacahöyük. “The execution area of the project was discussed at the meeting, which was attended by ministry officials, the mayor, the museum director, and citizens. The project is careful to prevent the suffering of citizens who have rights in the area and a road map was determined by taking views from all sections,” he said. “Alacahöyük, which dates back 4,500 years to the Chalcolithic period, was one of the most important centers of the Hittites. It has a magnificent gate with a sphinx, as well as religious and official structures, and it was also home to the first dam in Anatolia. This place is like an open air museum. The Alacahöyük excavations, which started in 1907 in the Ottoman period but only lasted for a very short time, continued in 1935 upon the order of Mustafa Kemal Atatürk with the support of his own money. It thus gained the ‘first national excavation’ title,” he said. 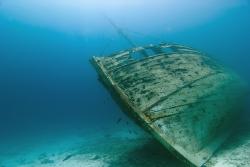 Thonis-Heracleion - The ancient Egyptian sunken port-city of Thonis-Heracleion is now having some of its secrets revealed thanks to new research from the University of Oxford. The port-city served as the obligatory gateway to Egypt sometime around the first millennium BC, being the place where incoming cargo from other regions was inventoried and taxed, before being transferred to Egyptian ships for transport down the Nile. The region where this city was once located is now under water, and is located about 6.5 kilometers off of the present day coastline. Makes you wonder what the coastlines of the world will look like in a thousand or so years, and what modern cities will be underwater by then. When you factor in modern anthropogenic climate change, and the rate at which the seas are predicted to rise with it, it is likely to be quite a few. “This obligatory port of entry, known as ‘Thonis’ by the Egyptians and ‘Heracleion’ by the Greeks, was where seagoing ships probably unloaded their cargoes to have them assessed by temple officials and taxes extracted before transferring them to Egyptian ships that went upriver. Before the foundation of Alexandria, it was one of the biggest commercial hubs in the Mediterranean because of its geographical position at the mouth of the Nile.” The city is a somewhat recent archaeological find, the first traces of the city were found only as recently as the year 2000, by the European Institute for Underwater Archaeology (IEASM).