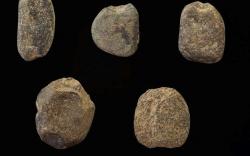 Jeongseon - Archaeologists excavating a cave in South Korea have found evidence that suggests human beings were using sophisticated techniques to catch fish as far back as 29,000 years ago, much earlier than experts previously thought. Carbon dating procedures on the fourteen limestone sinkers, unearthed in the eastern county of Jeongseon in June, have pushed back "the history of fishing by nets by some 19,000 years", Yonsei University Museum director Han Chang-gyun told AFP. Previously, researchers had excavated sinkers—stones used to weigh down nets for catching fish—in Japan's Fukui Prefecture and South Korea's Cheongju city, but those discoveries were all dated back to the Neolithic Era and believed to be around 10,000 years old, Han said. "This discovery suggests humans in the Upper Paleolithic era were actively catching fish for their diet", he added. The limestone sinkers, each weighing between 14 to 52 grammes and with a diameter of 37 to 56 millimetres, had grooves carved into them so they could be tied to the bottom of nets and used to catch small fish such as minnows in shallow streams, he said. Researchers also found fossilized bones belonging to fish and other animals, as well as stone tools and flakes, inside the Maedun cave, he said. Prior to the South Korean find, the oldest fishing implements were believed to be fishing hooks, made from the shells of sea snails, that were found on a southern Japanese island and said to date back some 23,000 years. 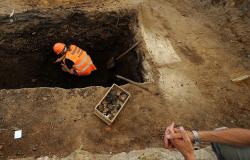 Yeleke Sazy - Archeologists working in the remote Tarbagatai Mountains in East Kazakhstan have discovered a ‘golden man’ mummy dating back to the 8th-7th centuries B.C. in the Yeleke Sazy burial mound. "Anthropologists say the mound is a burial place of a young man aged from 17 to 18 who was some 165-170 centimeters tall. All the burial items are well-preserved making it possible to visualize his garments and appearance. When buried, the young man was dressed in gold, with all of his clothes being embroidered with gold beads. The man was buried with a massive gold torc around his neck (suggesting his noble origin) and a dagger in a golden quiver beside him," Kazakhstan’s ministry of information and communications said in a press release on Tuesday. According to archeologist Zeinolla Samashev, who led the research team, much is to be done to study the burial. "We will do facial reconstruction from the skull of this young man, extract DNA from the bones to find out the environment people lived in back then, to learn about their everyday life and habits," he said. Meanwhile, Yegor Kitov, an invited anthropologist from Moscow’s Institute of Ethnology and Anthropology, surmised that the body had been mummified. "The finds and the size of the mound suggest that the young man buried inside had a high social status. The body was mummified to allow time for those coming from far away to say farewell to the man," he said. "The finds indicate the high level of technological development in gold jewelry production in the 8th century B.C., which, in turn, suggests the high level of civilization at that time," said Danial Akhmentov, head of the East Kazakhstan regional administration.
http://tass.com/society/1016377 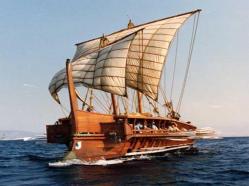 Mykolaiv  - Off the coast of the Black Sea in the Mykolaiv region, archaeologists have discovered a sunken ancient Greek shipwreck dating back more than 2.5 thousand years. The ship, discovered during a joint expedition of the Institute of Archaeology of NAS of Ukraine and the Warsaw Institute of Archaeology, is believed to be one of the oldest of its kind discovered in the region. According to the head of the black sea international underwater archaeological expedition, Vyacheslav Gerasimov, it may have possibly sailed ancient trade routes to Olbia or Chersonesos. “This ship is one of the oldest known in the Northern black sea. The ship belonged to the ancient Greek mariners V century BC – the period of colonization of the Northern black sea, when was the first settlement of Olbia,” Gerasimov said. Archaeologists are currently studying the ship in its underwater grave and will decide what to do with it once their research is complete. There are no photos available at this time of the find. “Lift without certain conditions for the preservation and storage is impossible; the wood that lays more than 2 thousand years under water may fall to pieces,” Gerasimov explained. 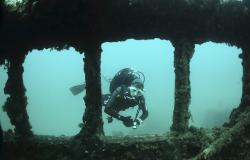 Balaklava - A well-preserved ancient wooden ship, presumably dating back to the Roman period, has been found off the coast near Crimea’s Balaklava, Roman Dunayev, who leads the Neptune underwater expeditions, told TASS on Tuesday. "We have found an ancient wooden sailing ship with a well-preserved anchor. The anchor suggests that the ship can be preliminarily dated to the Roman period. If it turns true, it is a unique find as it is the first Roman vessel found in Crimea in such an excellent condition," he said. The ship, in his words, was discovered at a depth of 90 meters at the bottom of the Black Sea near Balaklava. "The ship has retained its shape due to the unusual conditions at great depths in the Back Sea, with almost no light or oxygen," he said. The site is now being surveyed by archeologists to find out when the ship sank.
http://tass.com/society/1016317

Louxor - An Egyptian infrastructure project has been halted after construction workers found a sphinx-like statue during roadworks between the ancient temples of Karnak and Luxor. Workers at the site were said to have found a “lion’s body with a human head” by the area’s Director General of Antiquities, Mohamed Abdel Aziz. News website Youm reported that the statue could not yet be lifted above ground “due to the nature of the environment it is in.” However, national heritage chief Khaled al Anani encouraged people to visit the area to see the discovery.

Rép. TCHEQUE -  Olomouc - Prague archaeologists have removed the nearly 1,000-year-old remains of what are thought to be Přemyslid princes from the St. Stephen's cloisters in Olomouc.  It is believed that among the interned skeletons were those of Ota I, the Prince of Olomouc from 1061 until his death, and his wife Euphemia, a daughter of King Béla I of Hungary.  Researchers discovered a number of coffins at the Olomouc site only last year, and comprehensive testing has yet to be carried out.

Magnesia - Six statues dating back 2,000 years were discovered Saturday in the ruins of the ancient Greek city of Magnesia, located in southwestern Aydın province's Germencik district. Prof. Orhan Bingöl, who has been overseeing the excavations in the site since 1984, said four female and one male statues were unearthed in the ruins of a temple to Artemis, adding that one of the statues' gender was unknown. Bingöl said all statues were found in the same area and were in good condition of preservation, placed face-down next to each other. The first excavations in Magnesia were conducted between 1891 and 1893 by a German archaeological team led by Carl Humann. The work lasted 21 months and partially revealed the theater, the Artemis temple, the agora, the Zeus temple and the prytaneion. Excavations were resumed at the site, after an interval of almost 100 years, in 1984, by Bingöl.