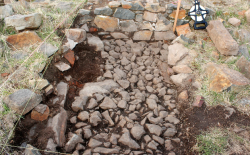 Launceston - Archaeologists are slowly uncovering more clues into northern Tasmania's convict past on a dig just outside Launceston where the remains of a building are painting a better picture of 1834 when the structure was built.Gathered around a trench, staring into the dug up earth the archaeologists and historians are piecing together the story of what was thought to be a barracks, but more digging has offered new explanations for the site. "Excavations have demonstrated that it probably wasn't a barracks. The stone flooring on the interior and the stone walls are incredibly overdesigned for it to just be agricultural shepherds' huts," Professor Eleanor Casella from the University of Manchester said. 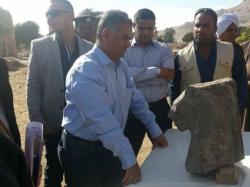 Marmadet bani Salama - An mission from Egypt Exploration Society, affiliated to the British Council in Egypt, in collaboration with the Antiquities Ministry, came up with new evidence to support the extension of the archaeological Marmadet bani Salama city, north west of Cairo, by around 200 meters southwest of the current borders. Antiquities Minister Mamdouh al-Damaty said on Wednesday that some pottery and stones were discovered at the new site, that dates back to the neolithic age. He said that the new discoveries would provide information about the many ways the neolithic man used to get out of Africa. Meanwhile, Omar Abu Zeid, deputy minister for antiquities sector, said such results were reached after the mission carried out the geophysical scanning, while resulted in discovering some holes that were unlikely to be checked before. He added that the newly-discovered extension requires more studies that could result in more archaeological and environmental information in the future as well as nature of life at that time. Essam Nagy, head of Egypt Exploration Society in Cairo, said they started scanning of the archaeological site, in collaboration of the ministry, in 2013. 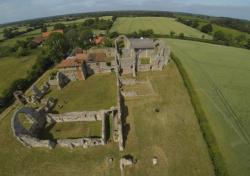 Leiston  - Archaeologists are hoping to unearth more hidden secrets when they return to Leiston Abbey in search of a lost infirmary this July. It will be the third time DigVentures has led a crowdfunded dig at the 14th century ruin – with members of the public again invited to grab a trowel and get involved. Gossip got out after the first excavation that the bones of Suffolk folklore monster Black Shuck had been found in the trenches. The huge carcass turned out to be the remains of a very large domestic dog, but the discovery caused no less excitement among experts from DigVentures, who have seen the dig gain in popularity since it began in 2013. Items have so far included a ‘papal bulla’ used to seal a message from the Vatican at the time of the plague, an earspoon probably used to remove earwax, and the kitchen waste pile – containing vital evidence of what the monks used to cook, what they ate, and how widely they traded. The team also found several Nuremberg jetons – a sort of informal currency minted in Germany but widely used in the area – as well as the remains of huge ditches running through one of the fields, prehistoric flint tools and signs of a previously unknown Bronze Age settlement.

BULGARIE – Varna -Archaeologists in the Bulgarian Black Sea city of Varna have discovered an aquaduct, several pithoi(large earthen jars) which served as water storage tanks, and a new fortress wall section of theAncient Thracian, Greek, and Roman city of Odessos (Odessus). The ancient aquaduct and water storage tanks appear to have been part of a facility that pumpeddrinking water into Odessos (known in Roman times as Odessus) and could also store some of it, explains Prof. Valentin Pletnyov, Director of the Varna Museum of Archaeology.