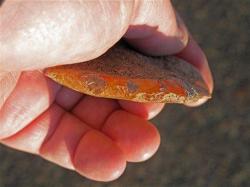 Rimrock Draw Rockshelter - Archaeologists unearthed a stone tool at an ancient rock shelter in Oregon that could be older than any known site of human occupation in western North America.The hand-held scraper was chipped from a piece of orange agate that is not normally found in eastern Oregon. The tool was found about eight niches below a layer of volcanic ash from an eruption of Mount St. Helen’s dated from about 15,000 years ago. The depth was about 12 feet below the surface. The U.S. Bureau of Land Management announced the find Thursday. An archaeologist from the agency, Scott Thomas, said that if the age of the site holds up to scrutiny, it would be the oldest west of the Rockies, predating the Clovis culture that is believed to be the first people to migrate from Asia to North America about 13,000 years ago. University of Oregon archaeologist Patrick O’Grady supervises the dig at the Rimrock Draw Rockshelter. He called the find “tantalizing,” but hopes to find out if the volcanic ash covers the entire area. Donald K. Grayson, professor of archaeology at the University of Washington, said the scientific community would be skeptical. "No one is going to believe this until it is shown there was no break in that ash layer, that the artifact could not have worked its way down from higher up, and until it is published in a convincing way," he said. "Until then, extreme skepticism is all they are going to get." Two pre-Clovis sites are generally accepted by scientists, Grayson said. One is Paisley Cave, 60 miles southwest of the Rimrock site and another is in Mount Verde, Chile. Both are dated about 1,000 years before the oldest Clovis sites. The find has yet to be submitted to a scientific journal for publication, but it has been reported in newsletters and at conferences, Thomas said. Thomas found the site several years ago, while taking a break from carrying supplies to a session of the University of Oregon Archaeological Field School nearby that O'Grady was overseeing. Thomas said he noticed an outcropping of an ancient lava flow, with some very tall sage brush growing in front of it, indicating very deep sediment deposits. The soil was black in front of the rock, indicating someone regularly built cooking fires there for a long time. An ancient streambed ran by, which would have given people more reason to stay there. And on the surface, he found a stone point of the stemmed type, found at sites both older and younger than Clovis. Similar points have been found at Paisley Cave. 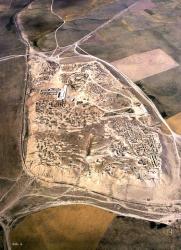 Nimrud -The terror group ISIS "bulldozed" the ancient Nimrud archaeological site near the northern Iraqi city of Mosul on Thursday using heavy military vehicles, the government said. Nimrud is a 13th century B.C. Assyrian archaeological site located on the Tigris River just south of Iraq's second largest city, Mosul, which was captured by the ISIS in June. The extremists, who control a third of Iraq and Syria, have attacked other archaeological and religious sites, claiming that they promote apostasy. 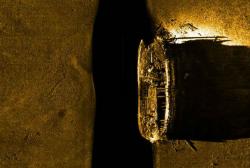 Nunalivut - The wreck of Lincolnshire Sir John Franklin's doomed vessel Erebus – which vanished in the Arctic 170 years ago – is to be dived by archaeologists next month. The Canadian Prime Minister Stephen Harper announced last September that scientists had found the ship in the Arctic Ocean off the far north of Canada. Now he says Parks Canada and Royal Canadian Navy divers will join together for Operation NUNALIVUT, which involves 11 days of intense ice diving and underwater archaeology in April. 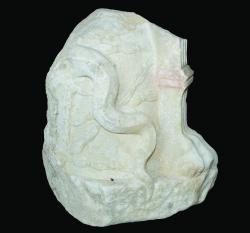 Side - An Omphalos stone, which has been found in Manavgat, a town in the southern province of Antalya, has proven the region was a prophecy center. Isparta Süleyman Demirel University Professor Mehmet Özhanlı said his further examinations of the stone have confirmed this fact. The Omphalos stone was found during excavations in 2001 in the ancient site of Side in Manavgat’s Side neighborhood. The original of the stone is made of meteor and it has many marble copies. The stone found in Side, which is one of these copies, is on display at the Side Museum. Özhanlı, who has been working on the stone since 2007, also made studies in Germany about the stone. He said that as a result of his work, it was documented that Side was the center of prophecy. “This stone was found in prophecy centers only and was considered holy,” he said. The professor noted the Omphalos stone was built in the center or top of a temple and the prognosticator of a temple took their power from this stone.  The nearly 40-centimeter high stone has a snake description on it, as well as other ornamentations. “Since the 7th century B.C., Side has been the only gate opening to the Mediterranean. There is another temple right next to the temples of the Goddess Athena and the God Apollo. The stone, which was found in the excavation carried out in Side Büyükhamam, showed us that the temples of Side had other functions; people did not go there to worship only, as it was also the center of prophecy. Our studies revealed that Side had a female prognosticator and this woman made prognostications in the Temple of Apollo. Side was a significant source of income in the ancient era. The professor said Omphalos was a Greek word, and continued: “’Om’ means center and ‘phalos’ means navel, which is the center. If we compare it to humans, the navel is the center of a human. Humans are tied to life with the navel. Omphalos symbolizes this. It symbolizes that it is the center of the world. It is one of the things that many cities want to have. The most recognized ancient city in the world is the ancient city of Delphi in Greece. Anatolia is home to various places such as Didim, Claros, Patara and of course we can mention Side among them. We see that these stones were considered holy until late periods. In the ancient age, the place of this stone was considered the center of the world.”Since the ancient ages, human beings have always been curious about the shape of the world, where its center is, and where they live. In order to understand it, they have created myths. In one of the ancient sources about the center of the world, the world is in the shape of a tray surrounded by oceans and Omphalos is the navel, the center of this tray. To understand the center of the world, Zeus sent two eagles across the two sides of the tray and they met at the Omphalos stone. And the area of this stone was considered the center of the world.
http://www.hurriyetdailynews.com/side-proves-to-be-a-prophecy-center-.aspx?pageID=238&nID=79236&NewsCatID=375