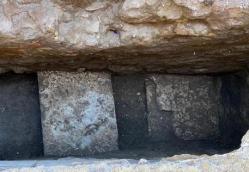 Rome - A sinkhole that opened up in front of the Pantheon in Rome last week has uncovered ancient Roman paving stones, sources said Tuesday. The seven travertine blocks, which have been found about two and a half metres below today's cobblestones, were part of the original paving when the Pantheon was built by Emperor Augustus's friend Marcus Agrippa in 27-25 BC, Rome special superintendent Daniela Porro said."This is further evidence of Rome's inestimable archaeological riches," she said. The paving was first discovered during the laying of service lines in the 1990s.

Lolland - Archaeologists have unearthed a massive structure in Lolland that is believed to have been used to ward off an attacking army back in the Roman Iron Age.  So far, 770 metres of the structure has been detected, but Museum Lolland-Falster estimates it could stretch to twice that. “This is a really big structure. It’s taken a lot of work to build,” Bjørnar Måge, an archaeologist and curator from Museum Lolland-Falster, told TV2 News. “We believe the structure was built around a kilometre from the coast between two impenetrable wetland areas – in a bid to stop attacking foe from entering Lolland.” The structure involved the digging of long lines and rows of holes in the earth – at least 10,000 holes are estimated to have been dug. In similar structures discovered in Jutland, the defensive ‘belt’ was combined with sharpened poles. Unfortunately, the structure on Lolland is nearly completely destroyed and the museum has been unable to accurately date the structure so far. It is a safe bet it was built during the Roman Iron Age, a period spanning the first four centuries of the first millennium AD.  In Hoby, near where the structure is located, archaeologists have found a grave of a wealthy individual from the Roman Iron Age. However, uncertainty over the date of the structure means they cannot link the two yet.“We haven’t found any signs of the belt being up-kept after its construction. It’s been allowed to decay,” said Måge.

Rep. TCHEQUE - Milevsko  - Archaeologists have made a unique discovery in the Milevsko monastery in South Bohemia. While creating a 3D scan of the monastery complex, they unearthed a secret corridor with an extended end hidden behind a massive medieval wall. It may have served as a safe for valuables concealed from raids by Hussite troops in the early 15th century.

Ytre Fosse  - Game chips and dice have been found in an early Iron Age tomb in northern Hordland in Norway. The discovery dates from the early Iron Age (circa 300 AD) in a burial mound at Ytre Fosse near Alversund in the municipality of Alver. A total of 13 whole and five broken game chips were unearthed, complete with a die. The chips are marked with numbers in the form of dots, and are valued zero, three, four and six. In total, fewer than 15 artefacts of this kind were previously found in Norway. Along with the game, the remains of what is believed to  be a nobleman or a powerful person were found. Bone debris, ornate pottery and burnt glass all indicate that the person in the grave was burned on a funeral pyre. A bronze needle was also found in the burnt mound. These are status objects that testify to contact with the Roman Empire, where people amused themselves with board games. People who played games like this were local aristocracy or from the upper class. The game indicated that you had the time, the profits and the ability to think strategically.

Orkney - Recent DNA analysis of whalebone artefacts found at The Cairns, Orkney, has shed light on the relationship between these marine mammals and the site’s Iron Age community, as well as hinting why the large local broch may have been demolished in the 2nd century AD. Excavations at The Cairns, near Winwick Bay on South Ronaldsay, Orkney, have been carried out by the University of the Highlands and Islands (UHI) since 2006. These investigations have uncovered the remains of an Iron Age stone tower, or broch, which was deliberately dismantled (see CA 275) as well as later Iron Age structures. The site has also yielded a variety of artefacts, more than 30 of which were made of whalebone – this included a large vessel that had been carved from a whale vertebra (see CA 323), found just outside the broch’s entrance and containing the lower jawbone of an older man who died c.AD 120–240.