the Solent - The rudder of the HMS Invincible, a 74-gun warship that sank in the Solent off the coast of southeast England in 1758, was spotted about 200 feet away from the stern of the wreckage during a geophysical survey, according to a BBC News report. “We weren’t particularly looking for it,” marine archaeologist Dan Pascoe said of the 36-foot-long flat piece. The ship was built by the French in 1744, and was captured by the British in 1747 before it eventually ran aground when the rudder jammed, and capsized three days later. “The ship was highly maneuverable and the rudder was critical to its design,” Pascoe added. He and his team plan to protect the rudder from erosion of the sea floor with sandbags. A gunpowder barrel, swivel guns, a bottle of corked rum, and woodworking tools have been recovered from the shipwreck site so far by researchers from Bournemouth University and the Maritime Archaeology Sea Trust. If funding becomes available, the rudder could also be raised and conserved.

USA - Cincinnati  - University of Cincinnati archaeologist Kenneth Tankersley and a team of six other researchers recently proposed that a comet exploded over what is now Cincinnati between AD 252 and 383. They claim the explosion rained fire across southwestern Ohio incinerating the villages and farm fields of the ancient American Indian Hopewell culture; and the resulting loss of life and livelihood brought about the decline of this civilization. But archaeologists who specialize in studying the Hopewell culture were deeply skeptical. Tankersely’s team claimed they found high amounts of the rare elements platinum and iridium, which can occur in comets and meteorites, at all eleven Hopewell sites they studied. They also claimed to have found the remains of Hopewell villages consumed by the fires ignited by the “cosmic airburst event.”  After examining the original excavation reports, however, Nolan’s team was able to establish that none of the evidence for burning found at these Hopewell sites were from burned villages. For example, all the burned areas documented at the Turner Earthworks, located near Cincinnati, “at or near the epicenter” of the proposed explosion, are burned clay altars, burned layers in mounds, or small beds of ashes where ancestors had been cremated. They were not the result of a single catastrophic event, but fires intentionally lit for specific religious purposes at various times over the site’s history.  Another problem with Tankersley and colleagues’ argument is their assumption that the Hopewell culture experienced a “rapid cultural decline.”  In fact, the changes that archaeologists have identified that signal the end of the Hopewell culture and the beginning of something new don’t suggest anything like a rapid decline in response to a disaster.

Patna - The Patna circle of the Archaeological Survey of India (ASI) has dug up remnants of brick walls, which officials believe could be at least 2,000-year-old, at the site of a pond rejuvenation work in Kumrahar area of Patna, Bihar. It appears that these bricks belong to the Kushan age that ruled over most of the northern Indian subcontinent, Afghanistan, and parts of Central Asia from circa AD 30 to circa 375, but any conclusion can be drawn only after a detailed analysis.

Kozani - Archaeologists have unearthed the ancient burial of a woman lying on a bronze bed near the city of Kozani in northern Greece. It dates to the first century BCE. Depictions of mermaids decorate the posts of the bed. The bed also displays an image of a bird holding a snake in its mouth, a symbol of the ancient Greek god Apollo. The woman's head was covered with gold laurel leaves that likely were part of a wreath. The wooden portions of the bed have decomposed. Gold threads, possibly from embroidery, were found on the woman's hands. Additionally, four clay pots and a glass vessel were buried alongside the remains. No other people were buried with her. The artifacts found with her suggest that she likely came from a wealthy background, and may have belonged to a royal family. It's unclear when exactly in the first century BCE this woman lived or if she would have witnessed or heard of any of those historic events. In the earliest days of ancient China, one of the driving forces that helped turn a group of relatively autonomous societies into what we would now call the Chinese civilisation was something many people still enjoy today: alcohol. In a new paper published in Archaeological and Anthropological Sciences, a team of scientists from the US and China described how the quest for red rice beer contributed to cultural interactions among neolithic peoples that would eventually lead to the birth of Chinese civilisation. The study focused on alcoholic red rice beer made in a large clay basin called dakougangs. The Dawenkou culture, some of the earliest settlers in China living in modern-day Shandong province in eastern China between 4,600 and 6,700 years ago, created the fermentation recipe. While ancient Chinese societies fermented all sorts of alcohol, the dakougangs would have been a major technological breakthrough, and it quickly spread westwards. However, despite knowing that there were dakougangs in eastern China thousands of years ago, the drink’s origin has not been identified. “Dakougangs were not made in every settlement but were mainly found in large elite burials. It is not clear exactly where dakougangs were made, how they were distributed or if they were traded as commercial items,” said Li Liu, a professor in Chinese archaeology at Stanford University and one of the authors of the paper. Because of its elite status, red rice beer would have been an important commodity amid a culture of “competitive feasting”. At the time, “individuals who could provide large quantities of such beverages would have been more competitive for status and prestige in the community”, the authors wrote.“Particularly if the drinks were of an exotic type.”

Preseli Hills - The awe-inspiring beauty of the Preseli Hills and the surrounding wild moorlands have long drawn visitors to north Pembrokeshire in Wales. Now an archaeologist has found evidence that even the Romans were drawn to the area, with the discovery of an ancient road showing they travelled farther west across Britain than previously thought. It expected evidence of a fort could emerge along its course, but that the Celtic Demetae tribe, who inhabited modern Pembrokeshire and Carmarthenshire, were thought to have been pro-Roman, so there would have been less need for a major military presence to quell local resistance. The existence of a road made perfect sense because it linked Roman farmsteads or villas, the remains of which have been found in the area.

Kerameikos - A major archaeological discovery of a trove of ancient curse tablets was made recently in Athens‘ downtown neighborhood of Kerameikos (Ceramicus). A total of thirty well-preserved curse tablets dating back to the Classical period (2,500 years ago) were found in an ancient well which was originally discovered back in 2016, when other everyday objects—but not the tablets—were found. The ancient tablets have curses engraved on them which Athenian citizens would pay to have made against other people, a practice which was relatively common in ancient Greece. The German Archaeological Institute, which has been conducting continuous research in the broader Kerameikos area since the early 1900s, has discovered more than 6,500 burial sites there, indisputably making Kerameikos the main burial site of ancient Athens. The curse tablets were accidentally found in 2020 while archaeologists were investigating the supply of water to a 1st century BC bathhouse which was close to the well. Ancient Greeks were known to use the method of engraving curse tablets and attaching them to wells or tombs in order to put a curse on someone with whom they had serious disputes. The tablets would be placed near tombs because they believed that the souls of the dead would carry these curses to the gods of the underworld. Sorcery was not an accepted practice in Athens, so this was seen as an alternative for any who believed in the power of evil. Namely, the gods of the underworld, who would make the curse a reality, would be invoked. According to archaeologists, in Ancient Greek curse tablets, the name of the individual who placed the curse was never mentioned; rather, it was only the name of the curse’s victim who was ever mentioned. 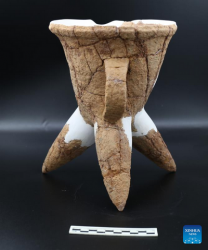 Heiyuling - Archaeologists have discovered 25 tombs dating back to the late Shang Dynasty (1600-1046 BC) in Central China's Hunan province. According to the Hunan provincial institute of cultural relics and archaeology, the Heiyuling tomb complex in Quzici Township, in the city of Miluo, spans tens of thousands of square meters. Staff are conducting cleaning and repair work on more than 50 unearthed items, including pots and the fu, a kind of cauldron in ancient China. The archaeological team also excavated two Shang Dynasty sites to the north of the tomb complex, and found pits, houses, kilns and other relics of the period, as well as pottery and stone tools. The tomb complex is the first mass-burial site of the late Shang Dynasty in Hunan, representing a breakthrough in understanding the burial characteristics of the ancient people in the eastern part of the Dongting Lake, the second-largest freshwater lake in China.