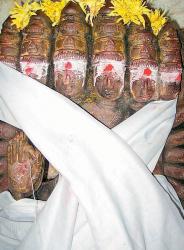 – x - Kurnool - In order to protect the panch mathas, the ancient centres of educational and spiritual learning, the state government has notified them as archaeological sites. Ghanta matham, Bheemashankara matham, Vibuthi matham, Rudraksha matham and Sarangadara matham in Srisailam in Kurnool district have thus been notified as protected monuments under the AP Ancient and Historical Monuments and Archaeological Sites and Remains Act. The panch mathas, constructed in the 7th century AD are in ruins, and the Srisailam Devasthanam’s efforts to revive them have failed. Ghanta matham is situated on 9,900 square feet of land, Shankar matham on 10,131.25 sq ft, Vibhuthi matham on 18,303 sq ft. Dr P.V. Sesha Sai Aswamedhayaaji, chief of the School for Scientific Analysis on Indian Traditional Systems, says, “The five mathams housed sages in ancient times. These five mathams helped many saints to stay comfortably in the deep jungle.” “Ghanta Matham has six faced goddesses and a cave entrance and an unusual metal bell. Tantra Sastra says that 24 persons have to stay here while the bell is rung continuously. Water is brought from the well for abhishekam during Shiva Rathri,” Dr Sesha Sai said.

Wattoowala - Archaeologists have discovered a rare Indus Valley civilisation-era seal in steatite dating back to 2,500-2,000 BC from the Cholistan area of Punjab province. The seal features the carved figure of an ibex with two pictographs. It was found at Wattoowala, located near Derawar Fort and along the ancient bed of the Hakra river, by a six-member team of archaeologists led by Punjab University Archaeology Department chairman Farzand Masih. Masih said the discovery would open new dimensions for scholars. The seal has a perforated boss on the back and varies from the style of Harappan seals. This shows a regional influence and perhaps a separate identity in the Harappan domain, he said. The seal is almost square in shape and slightly broken on the right side but the figure of the ibex is almost intact. The muscles, genitalia, hooves and tail of the ibex were engraved artistically with a high degree of skill and craftsmanship.

PAKISTAN - Sui-Vihar - The Punjab University team also conducted excavations at Sui-Vihar, which was the only existing example of Sankhya doctrines in Pakistan. Masih said the excavation revealed a circular platform at Sui-Vihar built with sun-dried bricks and a number of supporting walls to hold the platform and the cylindrical structure. The remnants of a votive stupa suggested that the place might had been converted to a Buddhist establishment when Kanishka-I embraced Buddhism, he said.

USA - Rhode Island - A Navy research boat and staff from the Woods Hole Oceanographic Institution accompanied local divers Charlie Buffum and Craig Harger of Colchester, this morning out to what they believe is the 201-year-old wreck of the Oliver Hazard Perry’s ship the Revenge, which they have discovered on Watch Hill Reef. The Navy boat, led by Buffum’s boat, left the Wadawanuck Club dock in the borough at 8 a.m. on what is expected to be a two-day expedition to survey the wreck site using a sophisticated autonomous underwater vehicle from Woods Hole that is equipped with sonar, a magnetometer and a video camera. The Revenge was a 14-gun schooner that sank on the reefs off Watch Hill on Jan. 8, 1811, while surveying southern New England harbors, including New London. Perry faced a court martial over the wreck but was eventually exonerated as blame fell on the ship’s pilot. Because of the incident, however, the formerly fast-rising captain could not get command of a ship battling the British along the Eastern seaboard. He had to settle for the less glamorous position of commanding a fleet of warships in the Great Lakes.

Hudson Bay - Viking exploration of Hudson Bay will continue in 2013 when descendants of the first Viking voyagers to reach North America 1,000 years ago sail into the Arctic from Churchill, Manitoba. .  Jóhann Straumfjord Sigurdson and David Collette, whose ancestral grandmother was Guðríður Þorbjarnardóttir the mother of Snorri the first European child born in North America, will sail from Canada to Iceland along a route that was old before Christopher Columbus was born. “We’ve named the expedition Fara Heim”, said Jóhann Sigurdson.  “In Old Norse, “að fara heim” means “going home”.  We are searching for Norse presence in the Arctic between Hudson Bay and west of Greenland to investigate how far West the Vikings explored”. The team will use non-damaging modern techniques to collect data and do no harm to artifacts or locations found.  All information and any discoveries will be digitally recorded and shared with government agencies for formal archaeological investigation. The expedition will work closely with the Inuit people and Nordic countries as Fara Heim is a story of many Arctic cultures.  “We have begun reaching out to everyone we can in the North to ask for local knowledge and stories. Incredible things have been found, like the Viking settlement in Newfoundland, by just asking.  We plan to make the Fara Heim website (http://www.faraheim.com) the nexus for information on Viking exploration in North America”, said Collette.