Filippovka - Archaeologists have found the intact burial chamber of a noble woman from a powerful tribe that roamed the Eurasian steppes 2,500 years ago in southern Russia, an official said Tuesday. The Sarmatians were a group of Persian-speaking tribes that controlled what is now parts of southern Russia, Ukraine and Central Asia from around 500 BC until 400 AD. They were often mentioned by ancient Greek historians and left luxurious tombs with exquisite golden and bronze artifacts that were often looted by gravediggers. But the burial site found near the the village of Filippovka in the Orenburg region has not been robbed – and contained a giant bronze kettle, jewelry, a silver mirror and what appears to be containers for cosmetics, said history professor Gulnara Obydennova who heads the Institute of History and Legal Education in the city of Ufa. “The find is really sensational also because the burial vault was intact - the objects and jewelry in it were found the way they had been placed by the ancient nomads,” she told RIA Novosti. The vault – located 4 meters (13 feet) underground – was found in the “Tsar Tumulus,” a group of two dozen mounds where hundreds of golden and silver figurines of deer, griffins and camels, vessels and weapons have been found since the 1980s. The woman's skeleton was still covered with jewelry and decorations, and her left hand held a silver mirror with an ornamented golden handle, Obydennova said. The descendants of the Sarmatians include Ossetians, an ethnic group living in the Caucasus region, who speak a language related to Persian.

Broxmouth - Archaeologists have published the full analysis of a rescue dig carried out at an East Lothian hill fort in the 1970s. Broxmouth, east of Edinburgh, was excavated shortly before the site was destroyed by a cement works. The community lasted for almost 1,000 years before the area was abandoned when the Romans left. The research is published in the latest edition of the magazine British Archaeology. Professor Ian Armit from the University of Bradford, who led the team investigating the site, said: "What we found has turned round preconceptions of the site. "We've got a level of detail that would never have been possible before, because of the very large number of high quality radio carbon dates . "They have given us a pretty fine grained chronology of the site." He said there was some evidence of activity at Broxmouth as long ago as 3000 BC. But the story really begins around 600 BC. At that time a wooden stockade was constructed round the hilltop.  But each generation built over what was there before it, so it was only the remains that were left by accident that allowed his team to work out the different stages of construction. Next came a monumental timber roundhouse, and its auxiliary structures. Then a hill fort was built at the site."There's debate about why hill forts were built", Professor Armit said. "Defence seems to have been part of it. And we have found signs of violence. There are fragments of bone which have suffered traumatic injuries from swords and axes scattered round the site.  "But the forts also seem to have been built, at least in part, for show. So the entrance is very elaborate, but the ditches and ramparts were pretty useless and had to be constantly rebuilt."  The archaeologists also uncovered a cemetery at the site, containing a tiny proportion of the residents who must have lived there. Some of the graves were very elaborate, perhaps suggesting that they contained the remains of high status individuals. But there were also fragments of bones from people who died violent deaths, from sword or axe wounds. "It looks like they were outsiders either killed at the site or remains brought back there as human trophies", Professor Armit said. "That suggests either feuding or raiding but we can't say if they came from twenty miles away, or from two hundred miles away." He said the most striking finding was that the site was home to a very settled and stable community, which lasted until about 200 AD. That "seems to have coincided with the period when the Romans withdrew," Professor Armit explained. "Perhaps that suddenly made the land up for grabs, and destabilised the area. "It looks as though the people of East Lothian may have been allied with the Romans, because there are no Roman military installations in the area. "But the fact that the dates fit doesn't prove that there was a causal relationship." But the team points out that there was a major change across southern Scotland and the north of England at that time, perhaps as the area was opened up to raids from the north. Whatever the reason, Broxmouth was never inhabited again. 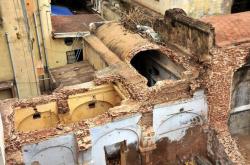 Madurai - The State Archaeology Department is taking steps to bring Rani Mangammal Palace here under its own purview, after the recent demolition of a portion of the palace drew public protests. On July 25, the demolition came to light after a part of the roof of a record room being used by PWD officials was found damaged following construction activities on the adjacent plot. Acting on a complaint by the PWD officials, the palace was inspected. It was found that much of the rear portion of the palace, lying unused, was found to have been pulled down. Pillars now lie broken and there are gaping holes in the lime and mortar structure. Murals are faintly visible in places where the layers of whitewash have chipped. “Nayak Queen Mangammal’s Palace. 1689” reads a small plaque on a wall inside the compound of the now Public Works Department (Water Resources Division) Periyar-Vaigai Basin circle office. This is all the identification that the building has to throw some light on its historical significance. Rani Mangammal, who became the Queen Regent in 1689, was believed to have spent the last few days of her life at the palace before her death in 1704. She was known to have built an extensive road network connecting Madurai to the nearby districts and constructing ‘Chathrams’ or inns near the highway and around the city for weary travellers.

Bear River - A big archaeological project will aim to shed more light on one of the darkest chapters of Idaho history -- the Bear River Massacre. State Archaeologist Dr. Ken Reid is busy planning the project to study the Bear River Massacre site. "It started out as a battle, and it ended up as a massacre, essentially, is what happened," said Dr. Reid. The site lies in the far southeastern corner of Idaho just outside Preston along U.S. Highway 91.  It's now a national historic landmark. In the winter of 1863 a band of Northwestern Shoshone men, women and children had established their usual winter village along the Bear River.  In the early morning of January 29 about 200 soldiers under the command of Colonel Patrick Connor attacked the village.  When it was over, hundreds of tribal members lay dead.  According to an historic marker on the site today, the estimates range from 240 to 500, including many women and children.  Only about 120 survived.