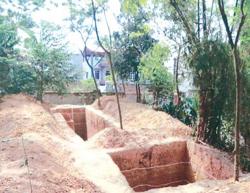 Co Loa -  Co Loa Citadel, 20km north of Ha Noi, appears to be the oldest such structure in Southeast Asia.The finding comes after seven years of archaeological excavations ."The citadel shows ancient Vietnamese people's unique innovation during the long process of protecting the country from foreign invaders," researcher Trinh Hoang Hiep from the Viet Nam Archaeology Institute said at a recent workshop. The citadel was built under the reign of King An Duong Vuong (around the 2nd century BC). Its name "Co Loa" is derived from the Sino-Vietnamese for "old spiral" as the structure is built in a spiral shape. Various relics of the Bronze Age Dong Son culture can be found at the site, which was recognised as a special national relic site in 2012 by the Prime Minister. Ancient history books in both China and Viet Nam mentioned the citadel, according to Hiep. However, the books mentioned the same events occurring in different places and at different times, confusing scholars. The archaeological results provide concrete data about when the citadel was built. Researchers also found that the three layers of walls were built using different techniques. While the outer and middle walls were built in circle form, the inner layer was built in flat square form. Based on historic materials gathered from excavations since 1970, researchers assumed that people of the late Dong Son civilisation (700-100BC) built the citadel. "Before Co Loa was built, there was no other construction site in such a large area in the Hong (Red) River Delta," Hiep said. "In order to build Co Loa, a strong army might have been mobilised." A large amount of brick tiles and stones was found at the site, which led to another hypothesis: could a tiled roof have been built above the citadel walls? According to folklore, Thuc Phan (An Duong Vuong) defeated the last of the Hung kings in 257BC and founded the kingdom of Au Lac, choosing the site of Co Loa as his capital. Co Loa is a very large site and is the dominant presence in the northern flood plain of the Red River Delta, so building it would have required a large amount of labour and resources. The story goes that when the city was built, all work done during the day was destroyed at night. The king made a sacrifice and that night a golden turtle came to him in a dream and told him that he was building the city on the turtle's carapace. The turtle instructed him to build the city in a new location, that of present-day Co Loa. The king did so, and the city was soon finished. The city was in the shape of a conch shell and had nine walls, each protected by a moat. The moats were part of a series of streams and lakes that exist to this day and provided Co Loa with protection and navigation. Out of gratefulness to the king, the magic turtle gave the king a claw that he could use as a trigger on his crossbow. When used, it multiplied its force by thousands of times. However, one of the Qin dynasty leaders, Zhao Tuo, took advantage of the decline of the Qin and created his own kingdom north of Au Lac. He tried to conquer his southern neighbour but was defeated. Instead, he married his son to the daughter of the Thuc king. When the son was in Co Loa, he discovered the magic turtle's claw and stole it. His father invaded Au Lac and easily defeated Co Loa. Stories of the Thuc king's demise vary. Some say he committed suicide by jumping in the ocean. Some say he was borne off to sea by the magic turtle and never seen again. Some say he was told of his daughter's betrayal by the magic turtle and killed her before disappearing with the turtle.

Hasankeyf  - Archaeological excavations have been carried out in the Hasankeyf district of Batman for 10 years. This year, archaeological excavations in the region took place in two areas. The archaeologists worked in a summer villa in an area named Selahi gardens which were once used as a summer resort by Artuqids, and at another mansion which features a storage unit for the vineyards and orchards surrounding it. Although preservation and restoration works continue in the area, these buildings are likely to be submerged due to the Ilısu Dam. "We have a different excavation area in the region," Uluçam reported. Previously, an excavation took place in collaboration with a Japanese team on Hasankeyf mound. During the studies, archaeologists drilled 9.5 meters into the mound and discovered that this area was used by humans. However, no other settlement was found below 9.5 meters.  Uluçan said that results from the 2014 excavation reveal that there is not a single public place left to dig in Hasankeyf. He stated that the settlement where the locals of Hasankeyf live will be carried over to another place, and the excavation works in the district will be concluded as there is nothing left to discover. "We submitted the cost of the excavation works to GAP," Uluçam added. Since 2004, excavations have been taking place in 38 different areas, including 34 drilling works. Through these archaeological studies, 144 unknown cultural objects have been unearthed. Many architectural pieces, from ceramic to metal have been discovered in the ruins. Uluçam concluded, "We have also brought some of the objects used by the people of those times to light. We revealed that barley and wheat were not discovered then; however, people were growing lentils." 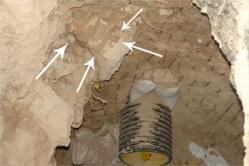 Teheran - Mohammad Esmaeil Esmaeili told Mehr news that after the discovery of a 400-year-old historical artifact during the digging operations by Tehran Sewage Company, the Institute for Cultural Heritage and Tourism issued a permit for archaeological excavations in this area. “The initial examinations conducted on these cultural findings revealed new dimensions of the historical artifacts in this area,” he added. “After one of the students at the University of Tehran notified the Institute of Archaeology about the existence of such cultural artifacts at the sewage excavations, the Cultural Heritage Protection Unit ordered for the immediate halt of the digging operations,” said Esmaeili. Esmaeili noted that the findings from the excavated holes by the sewage company include architectural remains, Qajari burials, potteries belonging to the mid and late Islamic periods, as well as pieces of stone containers. 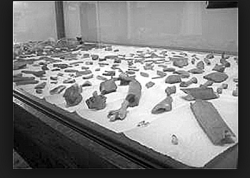 – Port of Spain - Results from the DNA tests confirmed that the samples of bones, which were discovered along with cultural artefacts during the excavation phase of the Red House in Port-of-Spain, belonged to people living in Trinidad and parts of Central America during the period AD 990 to AD 1400.Mark said excavation works to a depth of 1.5 metres have already been completed and there have been some significant finds, including: six complete skeletons, 36 incomplete skeletons,  a complete skull in a pot, several coins, the most valuable of which is a one dollar US gold lustre coin.