Laodicea - In one of the largest ancient cities in the western province of Denizli, Laodicea, the columns of a portico structure, which collapsed during an earthquake in 494, have been unearthed after more than 15 centuries.  Excavations have been carried out in Laodicea, which is located five kilometers away from the city center and was home to one of the seven churches mentioned in the Bible, by Pamukkale University throughout the year.  The head of the excavations, Prof. Celal Şimşek, said they had removed six columns from six meters deep in an area called the Holy Agora. “The traces of the earthquake that destroyed Laodicea still exist. The columns that collapsed during this big earthquake have come to light after 1520 years. Excavations continue. We will find other remnants,” he said.

Wallsend - The Roman army was on something of a slippery slope when it set up a base on the banks of the River Tyne. Evidence from excavations at Segedunum fort at Wallsend in North Tyneside has revealed that a stretch of nearby Hadrian’s Wall which crossed a small valley and stream collapsed several times because of the instability of the land. And digs over the last two years by volunteers from the WallQuest community archaeology project, which has uncovered the fort’s baths, have shown that this building also suffered from a landslip after being constructed on the valley slope. The stretch of wall was rebuilt, as was the bath house, but to a different design. The excavations have shown that, on one occasion the Romans tried to solve the problem by rebuilding the collapsed section with much bigger blocks of stone, probably recycled from the fort. The digs, which have unearthed around a third of the baths site, have revealed features such as its cold room, tepid room and large heated hall. It was probably built on the valley slope to access water from the stream via an aqueduct, but had to be reconstructed after a landslip. “The valley and the stream caused the same structural problems at the wall and the baths,” said Nick. 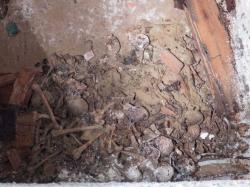 New York - Workers upgrading century-old water mains under Washington Square Park in Greenwich Village this week made a surprising and grisly discovery: a burial vault dating back to the 19th century with a large pile of skeletal remains. The vault, which is about 8 feet deep, 15 feet wide and 20 feet long, contained the remains of more than a dozen people, according to officials of the city's Department of Design and Construction. A contractor excavated the site, and archaeologists and anthropologists will be working there to gather more information, officials said Wednesday. Among the questions are the identities of the remains.

Saint Petersburg - Russian investigators began examining the grave of Tsar Alexander III Tuesday ahead of his exhumation in a probe looking to finally identify the remains of the last tsar Nicholas II and his family. The Peter and Paul Cathedral in Saint Petersburg where Tsar Alexander III is buried was closed to visitors as the state commission examined the 121-year-old grave, its press service said. Alexander III, the father of the last Romanov Tsar Nicholas II, died in 1894, and the preparatory work on his grave began with a religious service. The full exhumation is expected to take place in several weeks. Nicholas II, his family and their retinue were shot by the Bolsheviks in 1918, who then tried to hide the crime by burning their bodies, dousing them in acid and hurriedly burying them in the provincial city of Yekaterinburg. The remains of Nicholas II, his wife and three of their daughters were found in 1991 and reburied in Peter and Paul Cathedral in 1998 when Boris Yeltsin was in power. Nearly a decade later, the remains of his heir Alexei and daughter Maria were found in a separate grave in 2007. Their remains are currently in limbo in the state archive. Russia wants the remains of all of the Romanovs laid to rest in the same place and is pushing for them to be formally recognised in a ceremony by the powerful Russian Orthodox Church, which has canonised the family as martyrs. But the Church has never formally recognised any of the Romanov remains as authentic despite the results of DNA testing by international and Russian scientists. The Church says there must be no doubt over their identity since believers will revere them as holy relics.

Fjarðabyggð - An excavation taking place in Fjarðabyggð, east Iceland, has led archaeologists to believe that they have found the old Viking farmstead at Stöð in Stöðvarfjörður fjord. Stöð is where the Vikings first settled in the Eastfjords.   According to Fjarðabyggð‘s website, archaeologists intend to dig two test pits (small excavation units dug to determine more precisely which strata contains artifacts or other remains) later this month. Þórhaddur “the old” from Trondheim in Norway was the first to settle Stöðvarfjörður and lived there until his death. A Viking Longhouse was unexpectedly discovered in a parking lot in downtown Reykjavík this summer. Its excavation was completed at the end of summer, with all the stones from the structure being numbered and preserved, so that the structure can be re-assembled.