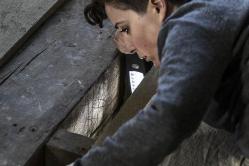 Knole - Cryptic markings discovered under the floorboards of a stately home have been identified as “demon traps” designed to protect a visiting king. A series of grids carved crudely into joists at Knole, a National Trust property in Kent, are the results of a susperstitious fervour that gripped England immediately after the failed Gunpowder Plot of 1605.

INDE – Poriem - The oldest stone inscription in the state stands forlorn and neglected by the roadside in Poriem. Locals call it Ubo Guno (upright stone) and are firmly against its shifting to any other place. But this piece of the state's history, which heritage lovers view with great sentimental value, is slowly decaying due to exposure to natural elements. Barely 4km from Sakhali town, the megalith along the Sakhali-Belgaum highway in Poriem lies in the close proximity of the ruins of the Sateri temple plinth, which most probably belongs to the period of Badami Chalukya rule. The inscription caught the attention of authorities and others after then chief minister Pratapsingh Rane informed director of archives, archaeology and museum Prakashchandra Shirodkar in April 1993 about the stone resembling a megalith.  With the help of professor Ritti, an expert in the epigraphy from Dharwad, the directorate identified the script as Brahmi of the mid third or fourth century AD. The word inscribed 'netravarisha' means two years. The other portion could not be deciphered on account of the incompleteness and disjointed state of the inscription. P P Shirodkar says that, palaeographically, this inscription has the importance of being the earliest stone inscription of Goa. Nundem inscription of Simha Raja from Nundem in Sanguem and Arvalem from Bicholim inscription in box headed characters are dated to the fifth century AD. Among all these stone inscriptions, found in Goa, Poriem's inscription is considered the earliest. 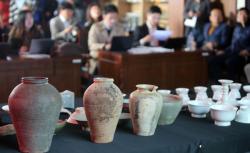 Mado Island - Archaeologists have found a ship in waters off Mado Island in South Chungcheong that is presumed to be from the Joseon Dynasty (1392-1910), Korea’s Cultural Heritage Administration announced yesterday. Should the presumption prove true, it will mark the first discovery of a ship from the 500-year dynasty that ended with the start of Japanese colonization of Korea in 1910. Koreans have discovered 12 ancient sunken ships so far, 11 from the Goryeo Dynasty (918-1392) and one from the Unified Silla Period (676-935). Strangely, they found none from the later Joseon Dynasty despite records of vessels sinking near Mado Island. What makes the Korean experts believe the ship is indeed from Joseon? Its porcelains. Whereas Goryeo is famous for its blue-green celadons, Joseon is well known for its milky-white porcelains. Near the ship, the National Research Institute of Maritime Cultural Heritage recovered 111 white porcelains as well as two pieces of Buncheong ceramics. (The National Research Institute of Maritime Cultural Heritage operates under the Cultural Heritage Administration.) Buncheong ware, produced during the first 200 years of the Joseon Dynasty, has a relatively coarse body and a green-tinted glaze, which experts say was the transition from Goryeo celadon to Joseon porcelain. “We will be sure of the ship’s era once we complete the underwater archaeological exploration next year,” said Sin Jong-guk, a researcher with the institute. “But the two pieces of Buncheong ceramics we found are believed to be from around 15th-century Joseon.” The ship, which measures 11.5 meters (38 feet) long and six meters wide, was first found in June when Korean archaeologists conducted a general inspection of the waters off Mado Island, Taean County. The area is considered an underwater treasure trove: So many ships sank in the area because of fast tidal currents, rocks and fog that the waters earned the nicknames “Cemetery of Wrecked Ships” and “The Underwater Gyeongju,” referring to the city in North Gyeongsang that used be the capital of the Silla Dynasty (57 B.C.-A.D. 935) and which features many historical sites and artifacts.  Korean archaeologists have found four ancient ships in the area since 2007, excluding the latest, unearthing about 30,000 artifacts.  The porcelains found near the Joseon ship - believed to be from the 18th or 19th century - were in several bundles, officials of the National Research Institute of Maritime Cultural Heritage say, which indicate that the ship was probably transporting the items and was a freight vessel. The ship’s surface had extra wood finish, which officials say was to strengthen its waterproof capabilities, and there appear to have been rice straw underneath the bundles of porcelain ceramics to prevent breakage. “[The findings] show how porcelains from different regions were traded to other regions through sea routes,” said Rha Sun-hwa, the head of the Cultural Heritage Administration. The porcelains include dishes, cups and bowls. Most startling are porcelain candle holders, the first such a find in Korea. Porcelain candle holders are considered an extreme rarity and pieces of art in their own right. However, there are some questions still to be answered. The major one is how the porcelain pieces were found near the ship, but not on it.  Also, it has been widely believed that during the Joseon era, there were kilns for making porcelains across the peninsula, making it unnecessary to transport them in large amounts via the sea. So if the ship is really from the Joseon era, that theory should be re-examined. The underwater archaeological exploration of the ship will begin in April. 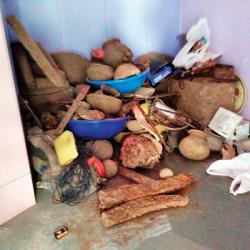 Vasai Fort - Historical artefacts found in Vasai Fort lie unguarded as the Archaeological Survey of India (ASI) piles them up in its office within the fort premises. The room housing the ancient stone tablets, ceramic pottery, bones and other objects, including those from the Portuguese era, is left unguarded and open to visitors. Moreover, no ASI officials sit there. "The ASI has neither documented the artefacts nor put them through a preservation process," said Shridatta Raut, historian. The Vasai fort, lying 55 km away from Mumbai, was built by Gujarat king Bahadur Shah. It is considered historically significant because it and the surrounding city was the second-most important site in the Portuguese empire, after Goa. ASI found the historical artefacts during years of ongoing excavation and restoration work at the Vasai fort. Responding to dna's query, the ASI said it would take prompt action to safeguard the historical artefacts. The ASI, however, said it had documented the important artefacts. 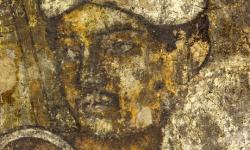 Ajanta - In March earlier this year, historian and writer William Dalrymplevisited the famed Ajanta caves with his wife. They wandered into two lesser-known caves in the 31-cave complex — numbers 9 and 10.  "I saw these extraordinary but unfamiliar paintings. I couldn't recall having seen their photographs anywhere, in any books on Ajanta," recalled Dalrymple during a talk organized by the Tasveer Foundation. "Although badly damaged, I could make out that these paintings were in a different style from the better known Ajanta paintings — more realistic and humanistic."  It turned out that these murals were from an earlier epoch altogether: at least 600 years older than the more famous ones. What happened to these murals? Why is there so little record of them? Dalrymple set out to understand that, and his search led him to discover this vast treasury of paintings, which he says can arguably be called "the oldest Buddhist paintings anywhere in the world." According to his research, these two caves and their murals fell into obscurity largely because in the 1930s, the Nizam of Hyderabad sent a team of Italian restorers to make them ship-shape, and they, in all their wisdom, covered them with shellac, which attracted bat dung and other kinds of debris till everyone gave them up for lost. Despite extensive damage, the paintings in this bunch are more realistic and robust representations of ordinary people than the more stylized forms of Bodhisattvas in the latter period of Ajanta cave paintings. They date, as far as can be estimated, to 70-90 BCE . "This pre-dates everything in Indian art. These are the oldest faces of Indians in existence," said Dalrymple, while pointing to slides showing visual representations of the Jataka tales, which formed the main subject matter of these paintings. The faces are full of vigour and expression, and each face is individually delineated, the historian pointed out. 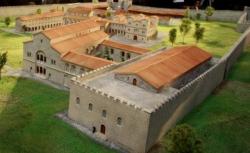 Veliki Preslav - The team of archaeologist Georgi Maystorski uncovered the eastern gate of Veliki Preslav - the second capital of the First Bulgarian Kingdom, reports the BTA wire service. After four years of research, Maystorski and his team found proof and precise parameters of the defence installation. “This is the most important discovery in Veliki Preslav in years,” Maystorski said. “Until now there was only guesswork about the existence of the eastern gate.” He added that he and his team found out the gate was on the road to Constantinople and was standing over a river, which ran across the city. After Veliki Preslav stopped being a capital, the wall and gate were not maintained and were destroyed by the river. The surrounding area was drained and flattened by the local population, which continued using the road. “I think the praise must go to the Archaeological museum of Veliki Preslav, which provided the funding for the excavations and my team who helped me find the eastern gate,” Maystorski said.