Jersey - Jersey archaeologists had the first chance to explore a rare medieval priory after uncovering a stone wall.  Robert Waterhouse, Societe Jersiaise Archaeologist, said the St Clement's priory had been an accidental find. He said the society knew it must have existed as there was documentary evidence, but that it had not been able to find it until now. Mr Waterhouse said: "In the summer we carried out a student excavation in the cemetery looking for [an] Iron Age and Roman settlement that was known to exist here. "At the end of the investigation one of our trenches came up with a substantial stone wall while the one behind came up with a great mass of building rubble and medieval pottery. "We put in a larger trench and came up trumps. We got a substantial medieval wall in the south west corner of the building." It is thought the wall belonged to the chapel of a priory founded by the Abbey of Mont St Michel in Normandy around AD1150. Neil Molyneux, Vice President of the Societe Jersiaise, said the priory would have been dissolved on the orders of King Henry V in 1413. The team believes the priory would have been a collection of small buildings, with the chapel as the most important, as they have uncovered evidence it had a slate roof. Mr Molyneux said: "We knew we were looking at the remains of a building of some importance. It is within a distinct date range that appears to be 12th or 13th century, which is the date the priory was fully functioning here. There would have been three or four monks living within the priory as well as a number of servants who would cook and look after the farm.

Isle of Man - A 14th century Bishop's seal discovered by metal detector enthusiasts will go on display at the Manx Museum. Curator of archaeology at MNH, Allison Fox, said: "It is a very rare find and an important part of Manx history." The find was made in a field in the north of the island in February. The seal itself is about three centimetres in length, made of silver, and shows two figures sitting facing out and a third kneeling in prayer. Around the edge there is an inscription in Latin, which translates as "Let the prayers to God of Germanus and Patricius help us". The seal will star in the Manx National Heritage's Forgotten Kingdom exhibition, which runs until March. The exhibition will explore the Kingdom of Man and the Isles from 1000 AD - 1300 AD. As well as the Bishop's seal the exhibition will include the Chronicles of Man, a 13th Century manuscript described as the Isle of Man's first story book, and the Lewis Chessmen.

Guntur - A large chunk of tourists who visit the district every year are attracted by the Buddhist museums at Amaravathi and Nagarjunakonda but few people even know that there is a third and equally important museum which has on display an impressive range of inscriptions, stone sculptures and pottery items belonging to the Buddhist era. It is the Baudhasree Archaeological Museum located in the heart of Guntur city (opposite Andhra Christian College) that unfortunately draws a handful of visitors. The Amaravathi and Nagarjunakonda museums stand out as the best tourist destinations due to their beautiful maintenance by the Archaeological Survey of India (ASI) while the Baudhasree museum slowly fades into oblivion. It has ancient sculptures dating back to the 2nd Century A.D up to the medieval period. Several centuries-old antiquities are showing signs of withering due to poor maintenance and many other items are kept in the fore lawns for want of space. The museum used to attract a sizable number of tourists, which gradually came down and the decline in footfalls was more pronounced later, noticeably after many artefacts were taken away to Amaravathi during the Kalachakra event in 2006. 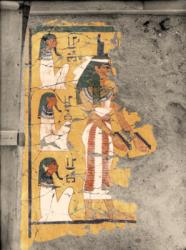 Vallée des Rois - To coincide with the 90th anniversary of the discovery of the Tomb of Tutankhamun, a near perfect replica will travel to Cairo as a gift to Egypt. Created by the Madrid-based workshop Factum Arte, the tomb will be temporarily exhibited in Cairo during the EU Task Force conference on Tourism and Flexible investment from 13th-14th November. The Tomb of Tutankhamun was hidden for 3,000 years, but since its discovery 90 years ago, it has rapidly deteriorated - not due to neglect but because it was not built to accommodate the vast numbers of people who visit each day. Working with The Society of Friends of the Royal Tombs of Egypt since 1988, the Supreme Council of Antiquities has been supporting this approach to the preservation of the Royal tombs. The facsimile of Tutankhamun’s tomb has taken Factum Arte over three years to complete. The work has involved the development of new technologies for recording the tombs and perfecting the method to replicate them; a project on this scale has never been attempted before. In 2010 the Supreme Council of Antiquities identified a site at the entrance of the Valley of the Kings near Carter’s House for permanent installation of the facsimile as a way of making a public commitment to sustainable tourism in Egypt. The goal is that this will give visitors an opportunity to understand the history of the tombs since their discovery, encourage conservation of the original site and establish Egypt as a world leader in this application of technology and manual skill.

York - Archaeologists working on the historic dig underneath York’s medieval Guildhall have used 3D laser scanners to create a comprehensive account of the important site. Dr Mark Whyman, of York Archaeological Trust (YAT) – which was commissioned by the local authority to carry out the work – has said that their work on the site has revealed new, unknown facts about location, and every artefact and structure has been surveyed and imaged with very high-tech instruments. “These three small excavations have produced results far exceeding their size,” he told the Yorkshire Post. The work was commissioned as part of the 800th anniversary celebrations of York being granted a Royal charter. The Guildhall was known to date back to the 1440s, but the dig reveals another structure that pre-dated it, likely to have been a Common Hall. Three trenches were dug, explored and surveyed as part of the work: one in the cellar beneath the arch of the Mansion House, a second in the Guildhall Yard and a third beneath the Guildhall in the underground Common Hall Lane.

USA – Serpent Mound - Officials with an Ohio historical organization expect to file charges soon against three to five people who they say vandalized and desecrated a 1,000-year-old site listed on the National Register of Historic Places. The suspects allegedly acknowledged in an online video that they buried small shiny objects called orgonites at the 63-acre Native American Serpent Mound. Three of the objects, made of resin and embedded with quartz crystals and aluminum foil, have been found so far. But authorities and officials with the nonprofit Ohio Historical Society say there may be hundreds more.