RUSSIE - Kushevat - In 2020, scientists led by Ivan Zolnikov from the Institute of Geology and Mineralogy of the Siberian Branch of the Russian Academy of Sciences investigated materials discovered during excavations at the Paleolithic site of Kushevat.31 animal bone fragments had been discovered at the site, which is located in the Shuryshkarsky district of the Yamalo-Nenets Autonomous Okrug. Amongst these bones were the remains of a reindeer (Rangifer taradus), a woolly mammoth (Mammuthus primigenius), a steppe bison (Bison priscus), Elk (Alces alces), deer (Cervus elephus sibiricus), and, potentially, a musk ox (Ovibos moschatus). Analyses of the bones dated them back to a series of 20 different radiocarbon dates, all ranging from the period between 20 and 40 thousand years ago. Although this finding solely points to animals, and not humans, inhibiting the Arctic region 40,000 years back, the discovery has now become the basis of further analyses which currently date human activity in the Ob region back to 40,000 years ago. This is because amongst this group of bones, two reindeer antlers held traces of human activity, which have only recently been analyzed. Using accelerator mass spectrometry, scientists from СО РАН have recently concluded that the age of these human traces is about 40,000 years. Accelerator mass spectrometry (AMS) is a dating technique often used in archeology, biomedicine, and the geological and planetary sciences to measure the long-lived radionuclides that occur naturally in our environment. The AMS analysis indicated that ‘modern’ humans were present in the lower reaches of the Ob at the beginning of the Upper Paleolithic age, which commenced about 50,000 to 40,000 years ago and concluded approximately 10,000 years ago. The period was marked with the fading out of Neanderthals and the emergence of grander settlements with ‘modern humans’, or Homo sapiens. The dates indicated by the AMS findings are the eldest dates we have as of yet that manage to place modern humans in the Arctic region. Furthermore, the human remains on the reindeer antlers enabled scientists to suggest that the humans’ origin in the Arctic is associated with hunting activities.

Winterborne Kingston - The site, which consists of typical Iron Age round houses and storage pits was discovered by archaeology students last September in Winterborne Kingston, Dorset. It dates from around 100 years BC, well before the Roman invasion of Britain. They uncovered the bodies of women and men as well as animal body parts in storage pits originally used to hold grain. Sites across Dorset in the Late Iron Age are unique because the communities here buried their dead in defined cemeteries, Elsewhere in the country they would either be cremated or placed in rivers, but in Dorset it seems they did things rather differently. The bodies were found in crouched positions in oval shaped pits and had been buried with joints of meat and pottery bowls originally containing drinks. 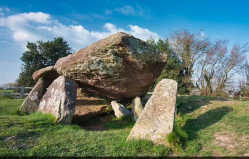 Herefordshire - Archaeologists from The University of Manchester have started a dig at a 5,000-year-old tomb linked to King Arthur, hoping to answer some of the mysteries surrounding the enigmatic site in the process. The experts are working in partnership with English Heritage, which looks after Arthur’s Stone in Herefordshire, to remove turf to expose and record particularly sensitive archaeological remains. Arthur’s Stone is a Neolithic chambered tomb which has never previously been excavated, but English Heritage say that similar examples in the same region have been found to contain incomplete skeletal remains of several people, together with flint flakes, arrowheads and pottery.Today, only the large stones of the inner chamber remains, which is placed in a mound of earth and stones whose original size and shape remains a mystery. The chamber is formed of nine upright stones, with an enormous capstone estimated to weigh more than 25 tonnes on top. Like many prehistoric monuments in western England and Wales, this tomb has been linked to King Arthur since before the 13th century. According to legend, it was here that Arthur slew a giant who left the impression of his elbows on one of the stones as he fell. 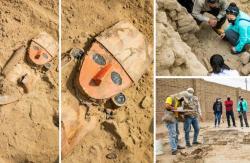 Chan Chan - Archaeologists have unearthed a wooden sculpture at Chan Chan, the Capital of the Chimú Kingdom. The Chimú culture emerged around AD 850-900, having succeeded the Moche culture and controlled an area of 1,000 kilometres of coastline from Piura in the north to Paramonga in the south. Excavations were part of the “Recovery of the Huaca Takaynamo” project that was conducting studies of Huaca Takaynamo north of the main complex, revealing a 47 cm by 16 cm wooden sculpture depicting a litter bearer of a ruler that is decorated with 7 vertical colour bands.The sculpture has a flat oval face painted red with almond-shaped eyes and would have been decorated with mother-of-pearl plates fixed with black resin. The figure also has a triangular cut skirt decorated with small rectangular bands and wears a trapezoidal cap. Archaeologists are yet to date the sculpture, but the form and art style indicates that it is early Chimú, between 850 and 1,470 years old, making it one of the oldest sculptures found at the site. The researchers also uncovered a necklace made from nectandra seeds (a genus of plant in the family Lauraceae) and the remains of the original thread, in addition to a small black bag decorated with brown and white threads. 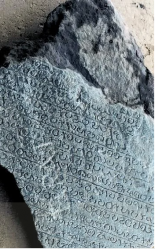 Attappadi -  The unearthing of russet-coated black-and red-polished earthenware which were over 2,000 years old and dating back to the early Iron Age and inscriptions of the tenth and eleventh centuries calls for a detailed and larger excavation in various parts of Attappadi to find archeological remains.The findings over the last few years, which include the urn and cist burials of the Megalithic period, point to the existence of a riverine civilisation.

Yeşilova / Yassıtepe - Ancient bone needles estimated to be 8,200 years old have been unearthed during excavations conducted in the Yeşilova and Yassıtepe mounds of western Turkey's Izmir. In the ongoing works at the mounds, where the first people of Izmir lived, nine different ancient villages dating back to 8,500 years were discovered in a row. In the villages, the remains of breams, poisonous stingrays, sea urchins, oysters and mussels revealed that ancient people were consuming sea food in the past, just like today's locals. The first finds of this year's excavations were stone cutting tools used in meat cutting, wood chipping and furniture processing from 8,200 years ago. And the latest findings were the needles made from animal bones and thought to be used by women in weaving. Hatay - During a routine construction job in the Defne district of southern Turkey's Hatay, workers digging to lay the foundation of a new structure stumbled upon the remains of a Roman villa, including its preserved geometrically patterned mosaic floor. In the examination carried out by the archaeologists in the area, it was determined that the ruins were the walls of a Roman villa and that its floor had been decorated with mosaics in a geometric pattern. Floor mosaics and wall remains of a Roman villa were unearthed. Based on the ruins and small finds, we determined that this place was inhabited until the 2nd and 5th centuries. During the excavations, they found that some of the remains of the villa walls and some of the floor mosaics were damaged. Perperikon - Archaeologists have finally begun this year’s excavation season at the site of the ancient stone city of Perperikon, said Prof. Nikolai Ovcharov. After many delays, they will be able to get to their task of uncovering the secrets of the temple of Dionysus, added Ovcharov, who leads the exploration of the Peperikon complex in the Rhodope Mountains, Southern Bulgaria. The site in question is a large building with massive stone walls, quite close to the main Dionysus altar. The building was located in 2005 but is to be uncovered this year, Ovcharov explained.

Skalica - Archaeologists have discovered a rare Early Bronze Age axe in the Skalica District, western Slovakia. It is the oldest metal artifact ever recovered from this archaeological site. The axe is 3.7 inches long with a flared, curved cutting edge and grooved flat sides. The butt comes to a point in the middle. It is a known as a Saxon type axe, a form so ancient the earliest examples are made of copper. Similar axes were found in Slovakia in Veľky Grob (district Galanta), Úľany nad Žitavou (district Nové Zámky), Ludanice-Mýtná Nová Ves (district Topoľčany), Levoča, Valalikoch-Všechsvätý (district Košice-surroundings), Barci (district of Košice-surroundings) and in the Czech Republic, e.g. in Prague-Liboc, Loune-Seběchleboch (Ústí Region) and Žatec (Ústí Region). The core of their occurrence is in central Germany and Saxony. They occur e.g. also in Hungary, Poland and the Netherlands. They are found in treasures and as rare finds. In the western parts of Slovakia, they begin to appear in the late phase of the Nitrian culture (approx. around 1900 BC), when the people of the Unetic culture from Moravia significantly penetrated southwestern Slovakia, and are a typical metal artifact throughout its duration (ends around 1,750 BC). Bronze, an alloy of copper and tin, was already established in the Unetic culture in the production of metal objects.