Camas - It has been kept locked away for years, with the public only having seen it five times since it was first discovered. But now an ancient hoard of gold jewellery has gone on permanent display at the Archaeological Museum in Sevilla. The so-called Carambolo Treasure is made up of 21 elaborately worked 24-carat gold pieces that together weigh almost three kilos. The collection, which dates back to the Phoenician period, was discovered by workmen in 1958 on a hill in Camas on the outskirts of Sevilla. Later excavations revealed the site was a sacred complex, dedicated to Astarte and Baal, thought to date back to the 9th Century BC and probably used by the Phoenician merchants who ruled Sevilla until the start of the 7th Century BC. The gold pieces – which are remarkably well preserved – may have been used as part of the ritual for animal sacrifice. Now, the new exhibition, split into four themes, will explore the treasure’s discovery, the characteristics of the Carambolo sanctuary, other river and coastal sanctuaries nearby, and the treasures of Ebora and Mairena del Alcor.

Mons - The third-ever guinea pig skeleton found in a European archaeological dig confirms that these little squeakers voyaged to the Old World very shortly after Spain conquered Peru in 1532. While the guinea pigs, also known as cavies, served as food in South America, they seem to have been treated as pets in Europe. They may have even been a privilege reserved for the relatively well-off, at least at first. That was lucky news for at least one guinea pig whose skeleton was newly unearthed in Mons, Belgium, before the construction of a parking garage in the city. Excavations revealed the current city is built on top of an older village established in medieval times. The spot where the parking garage was to be built was once a sort of medieval suburb — a residential district right outside the town center. In the cellar of one of the well-appointed homes in this district, researchers uncovered eight guinea pig bones, likely all from the same animal. Because the bones weren't scattered about, hacked or gnawed upon, the archaeologists are confident the critter was given a proper burial befitting a family pet, not stewed and eaten.

Slimbridge - An axe head found in a garden in Gloucestershire, which was claimed to be of Viking origin, is an 18th Century woodworking tool, experts have said. It was found in 2008 by Ian Hunter Darling under a hedge at his home in Slimbridge. Slimbridge Local History Society who said last week it was Viking have now renamed it the "Slimbridge axe head". Archaeologist Kurt Adams, from Bristol Museum and Art Gallery, said he went to see the find at Stroud Museum on Thursday. He said: "It's definitely an 18th or 19th Century woodworking tool - a heavy duty woodworking axe. "Axes can be quite difficult to date because the form fits the function - but having said that Viking and battle axes are quite distinct. "A single artefact doesn't show evidence for a battle, as it could have been an object which was traded or lost." Professor Mark Horton, from the University of Bristol, said: "The find has aroused a great deal of interest and incredulity with the archaeological community on the internet - on the Britarch discussion board. "There is no way that this is a Viking axe head - they look completely different. As to the claim that there was a major battle at Minchinhampton in the 10th Century - these I'm afraid are the product of an over fertile antiquarian imagination. "There was certainly Viking activity on the River Severn during this period but this is a case of two plus two equalling five."

INDE – Ropar - Hallmark pottery dating back to 1900 BC has been recovered during the recent excavations in Ropar (now Rupnagar), Punjab. The Archaeolog-ical Survey of India, which recently started excavating the site after a gap of 56 years, has recovered fragments of “geometrical designs” belonging to the Harappan era. Currently Pakistan forms the core area of Indus-valley civilisation (Harappan era), the remains of this old civilisation was also seen in India in 1953 during the excavations. The excavations, however, stopped in India in 1955.
After more than five decades, archaeologists say further digging may get them “typical” Harappan culture designs. “We have so far found the contemporary, regional elements, but there is a possibility of receiving typical Harappan culture designs,” said superintending archaeologist V.N. Prabhakar. Experts say once the excavations are over, they will use scientific methods to establish the dietary pattern of the Asian population that lived there, exact origin of Harappan culture, relevance etc. Archaeologists believe that the Harappans lived at the Ropar site till about 2000 BC. However, the reason for them to leave the site still remain to be unfolded. 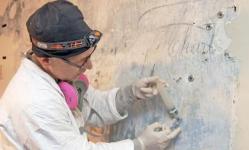 Culpeder - With the steady hands of a surgeon, architectural conservator Chris Mills slowly unveils history one painstaking step at a time. His goals are to reveal and protect the Civil War-era signatures, drawings and scribbling found throughout the Brandy Station Graffiti House. The circa-1858 structure is believed to have been used as a hospital by Confederate and Union forces during the war. For unknown reasons, patrons decided to mark up the walls with signatures, drawings and anything else that crossed their minds. Mills' challenge is to remove the post-historic paint and whitewash t /hat subsequent owners attempted to cover the markings with, as well as stabilize the fragile plaster. 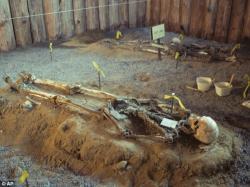 Fort William Henry - Demands have been made for the return of soldiers' skeletons to Fort William Henry in New York after it emerged today they were never laid to rest during a burial ceremony at the site nearly 20 years ago. The remains of unidentified soldiers who fought during the 1755 French and Indian War near the American fort - which was the historical setting for The Last of the Mohicans - were discovered in the 1950s during an excavation of the site. The grisly remains were on display until 1993 when a well-publicized reburial ceremony was held to honor the redcoats and American provincial soldiers whose remains were being re-interred in the newly-built cemetery at the fort. But staff at the historical site have now admitted that only three of the 15 18th-century skeletons found when archaeologists excavated the site ahead of the fort being rebuilt, were actually buried because the rest were being studied in other parts of the country. In August 1757, the French burned Fort William to the ground after the British surrendered following a week-long siege. After the surrender, native Indian allies of the French killed about 200 of the garrison's defenders.

ROYAUME UNI – North Yorkshire - The clues to the past have been unearthed by local archaeology groups around North Yorkshire and have now been published on the internet. More than 2,500 newly recorded archaeological sites - and new information on many previously known sites - have been posted by the county council in the online North Yorkshire Historic Environment Record. They include previously unknown hut circles indicating Iron Age settlement at North Stainley, near Ripon. The site was identified by the Ripon Community Archaeology Project as part of its long-running project to document the archaeology of parishes in the area. There is also a large body of work on sites in and around Northallerton, carried out as part of the Northallerton Local History Project. Additional information on the route of a Roman road from Thornton le Street through Northallerton and beyond will be added to the online records as work progresses. The site can be visited through heritagegateway.org.uk