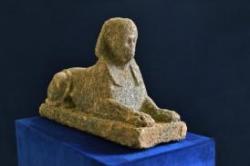 Montem Rossulum - Italian police on Thursday said they had recovered a 2,000-year-old Egyptian sphinx statue that was stolen from a necropolis near Rome and was about to be smuggled out of the country. "The investigation began with a random check of an industrial vehicle during which police found a decorative ceramic object from an excavation as well as many photos of the Egyptian sculpture," the police said in a statement. A search of the driver's residence turned up the statue from the Ptolemaic era (4th-1st centuries BC) packed into a crate and hidden in a greenhouse. The statue is believed to have been stolen from the Etruscan necropolis of Montem Rossulum near Viterbo, some 100 kilometres (62 miles) from Rome. The police "prevented the sculpture, as well as a series of ancient objects from being put on the clandestine international market," the statement said. The granite statue measures 120 centimetres and 60 centimetres. Egyptian sculptures began to be shipped to Italy following the Roman conquest of Egypt in the 1st century BC. 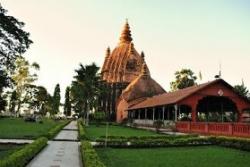 Assam - Monuments and temples associated with the Ahoms, who ruled ruled Assam between 1228 and 1826, would be renovated by the Archaeological Survey of India using the material that they were originally built with. The Shiva Dol (temple) in Sibsagar town, the Gaurisagar Tank, the Gaurisagar Shiva Dol and the Charaideo Maidams (graveyards of Ahom kings) built during the heydays of the Ahom rule were to be restored. "The intention of the project is to give back the monuments, temples and structures their old looks and ensure that our heritage is protected," Gupta said. Gupta said work has already begun at the Gaurisagar Dol and lime-surkhi plaster would be used in renovation.

Melrose - Dr. Chris Bowles, SBC archaeology officer with some of the stone in the field of Mantle Walls, Ancrum which is believed to be part of a medieval bishop's palace. Archaeologists from Glasgow University are to begin investigations in october 2012. Scottish Borders Council’s archaeology officer Dr Chris Bowles said: “I hope something can happen at Old Melrose that would add significantly to our knowledge of the Borders’ historic environment.” He continued: “Old Melrose is internationally important as being the first spiritual home of St Cuthbert in the 7th century AD and one of the earliest Anglo-Saxon monasteries in northern Britain.” St Cuthbert, later the abbot of Lindisfarne monastery, may have been from the Borders and he spent many years at Old Melrose before moving on to other monasteries. After his death his fame grew into a cult, said Dr Bowles, adding: “Old Melrose may have continued as a monastic community for much of this period, and was even raided by Kenneth MacAlpin in the 9th century.” He continued: “By the 12th century, the Scottish King David I founded a chapel on the site of Old Melrose, perhaps with the aim of placing a new monastery at the site. It was ultimately felt that the site was inappropriate for the new Cistercian community, so David founded Melrose Abbey instead (taking the name from Old Melrose).” The chapel survived as a site of pilgrimage for most of the medieval period, but Dr Bowles said: “There is no trace of this rich history at the site today apart from a scheduled series of earthworks that cut across the neck of the promontory.” From records there were a number of monks’ cells in the early mediaeval monastery at Old Melrose. The local historians hope there will be some kind of archaelogical investigation into the layout of the peninsula. At one end of the scale would be the reprocessing the geophysical data the trust has already and investigating the non-scheduled section of the ancient ditch which cuts off the neck of the peninsula, said Mr Gordon.

GENOGRAPHIC PROJECT - The National Geographic Society has announced the next phase of its Genographic Project -- the multiyear global research initiative that uses DNA to map the history of human migration. Building on seven years of global data collection, Genographic shines new light on humanity's collective past, yielding tantalizing clues about humankind's journey across the planet over the past 60,000 years. "Our first phase drew participation from more than 500,000 participants from over 130 countries," said Project Director Spencer Wells, a population geneticist and National Geographic Explorer-in-Residence. "The second phase creates an even greater citizen science opportunity -- and the more people who participate, the more our scientific knowledge will grow."