IRLANDE – Ennis - Archaeologists in County Clare believe they have discovered Ireland’s earliest surviving example of a timber framed house. Dendrochronological analysis is expected to conclude that the timber structure at Chapel Lane, Parnell Street, Ennis, dates back to the late 16th century. Ms. Irene Clune’s house, known as McParland’s is long understood to have been the oldest inhabited house in the Clare County capital. The building’s triple diamond stone Jacobean  chimney has been an icon of medieval Ennis for centuries. During October 2011, the gable and chimney were carefully recorded, taken down and stored. At present the historic gable is being re-built using the original stones bedded in an authentic hydraulic-lime mortar, the floor of the house having been archaeologically excavated prior to this. In recent weeks, archaeologists have discovered an oak frame structure which they have described as “potentially one of the most exciting urban archaeological discoveries in Ireland in recent years”. Frank Coyne explained that the limited archaeological excavation has revealed a wealth of information. “The existence of a foundation cut in the interior of the house, indicates an earlier structure on the site, which is also borne out by the presence of large oak beams in the walls of the house. It is hugely significant that these beams are oak, which will enable us to use tree ring dating. If these prove to be of medieval date, which we believe is the case, then this means that this house is the only structure of its type in the country”, explained Mr. Coyne. 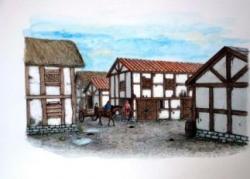 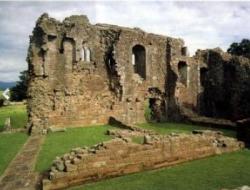 Brougham  - A perfect example is the Roman fort and settlement at Brougham, near Penrith, on a major crossing point of the Stainmore A66 and the A6 from Carlisle to Lancaster. Rachel Newman, senior executive officer of Oxford Archaeology North, described the latest work on domestic buildings outside the fort. She said: “It makes sense that there was a fort at the crossing point of these major roads. “It is one of the least studied earthworks of the North West. “We know very little about it. “The medieval castle at its corner has seen much greater study.” In the 1960s an upgrade of the A66 provided clues to what was likely to be a major military and civil settlement. She said: “During this work a major Roman cemetery was found. “It did produce some very high-class graves with lots of material in them as well as some more mundane ones.” More recent digs have found pottery and revealed the floor plan of a relatively short-lived civilian settlement. There may have been two-storey buildings, possibly shops or workplaces with living space above. Traces of cereal growing have been found and a burnt garlic bulb. She said: “This settlement seems to thrive for about 100 years then cease.”

ROYAUME UNI – York - Six human skeletons, thought to be the remains of Roman gladiators, have gone on display at a new visitor attraction in Durham. The skeletons were uncovered during an excavation in York between 2004 and 2005. Eighty burials were excavated, of which 60 were mostly complete skeletons. Almost all were male and the majority were adults. Dr Anwen Caffell played a key role in researching their origins. She worked with Malin Holst to review some of the injuries, illnesses and ages of selected skeletons. Kurt Hunter-Mann, a field officer at York Archaeological Trust, who led the original excavation, said: “The skeletons have been the centre of much global interest over the last year and have been the subject of ongoing debate as to how they came to be lying decapitated in the large cemetery site.“Opinion still remains divided. Unusual marks on the skeletons, including possible bite marks from large carnivorous animals, fuel the debate that the skeletons could be the remains of gladiators, who lived and fought in York during the Roman occupation.