Bukan - The findings were revealed through a survey across the centuries-old Sardar Castle located in Bukan, northwestern province of West Azarbaijan. “So far, the excavated objects in this stratigraphy analysis includes Iron-Age pottery fragments, animal bones, a stone tool, a piece of bronze rod, and small and large-sized jars,” said archaeologist Yousef Hassanzadeh who leads the team. According to Encyclopedia Iranica, the term Iron Age in Iran is employed to identify a cultural change that occurred centuries earlier than the time accorded its use elsewhere in the Near East, and not to acknowledge the introduction of a new metal technology. “Iron artifacts, in fact, were unknown in Iran until the 9th century BC,” the encyclopedia suggests.

ARABIE SAOUDITE - Halit Al-Athari -  The National Authority for Tourism and National Heritage revealed here today a new archaeological trove, due to results of the field work during the first season of the excavation project, at Halit Al-Athari site, in Dawadmi Province, in Riyadh Region, which proved the importance of the site as it uncovers a range of different ancient urbane traces.
The head of the excavation team and director of the National Heritage Department, Ajab al-Otaibi said that the excavation revealed a mosque that mediates a settlement in the style of early mosques, in the first Islamic era, and models of houses consisting of yards, storage rooms and work areas containing furnaces to melt metals and treating them into different items, as well as the discovery of adjacent furnaces that were a model of the stages of mining described by Islamic sources, as well as pottery and glass improvisations and other implements of stone soap and precision tools such as beads and glass bottles, which give an initial impression of the existence of economic mobility and commercial transactions, in the settlement. He pointed out that a number of inscriptions and Islamic writings were documented around the site, pointing out that these writings give a new dimension to the history of the region and its civilization during the early Islamic period. Pottery that was discovered on the site was studied and classified and it emerged from the preliminary results, that it can be dated to the early Umayyad or Abbasid eras, he stated, adding that the exploration project focuses on the excavation work in the fenced area of the archaeological site, indicating that the objective of the project is to verify the density of archaeological troves and uncover the tools and means associated with the mining work.

Kal Kaboud Hill - The Public Relations Office of the Research Institute of Cultural Heritage and Tourism (RICHT) quoted Majid Mohammad Yarloo, the head of the probing team to determine the limits and propose the privacy of Kal Kaboud Hill site as saying that the hill is an area which belongs to the prehistoric (Copper-Stone, Bronze and Iron Age), the historic ((Parthian-Sassanid) and the Islamic eras (Seljuk-Ilkhanid). Based on the surface surveys the boreholes drilled to determine the limits and privacy of the hill, the archeologist noted that the largest volume of cultural layers of the enclosure belongs to the Copper-Stone and old Bronze eras. The oldest pottery which has been discovered is from the Dalma style culture and the Bronze pottery of the site dates back to the second period of the culture of the old Trans-Caucasus (Yanik), he said. He also pointed to the discovery of some pieces of pottery of Godin lll style, which seem to have been imported, and a granite mace-head which belongs to the Bronze Age. Referring to the registration of Kal Kaboud Hill in the list of National Monuments in 2003, he noted that with regard to the surveys carried out in the northern plains of Hamedan Province and the large volume of prehistoric deposits, the possibility of the existence of the Neolithic period cultural layers in this area is not beyond expectation. Sofia - Late antiquity tomb with frescoes was discovered last night during the repair of the sidewalk on Moskovska Street. Archeologists have been given a task to start exploring the tomb and the terrain. According to initial data, the tomb is from the end of the fourth and the beginning of the fifth century. During the excavation, many clay pots and thousands of silver coins were found. Part of the interesting finds are a wooden sword handle with decoration, as well as a oyster from the Aegean sea, which directs the rich way of life of the citizens of Stara Serdika.

Vilnius - An international team of archaeologists has uncovered the bimah, or central prayer platform, at the site of the Great Synagogue of Vilna. The building, constructed in the 1630s, was burned down by the Nazis during World War II and built over by the Soviets in the postwar period. The original bimah was damaged by fire in the eighteenth century and rebuilt in the Tuscan Baroque style, with decorative lions facing the ark where the Torah scrolls were kept.

Euromos - Archaeologists have uncovered and restored seven tombs belonging to Hellenistic and Roman periods in Euromos, an ancient city in southwestern Turkey. The team is led by Abuzer Kizil, a lecturer at Mugla University. "Euromos is the most important city after Mylasa. These tombs consist of Roman and Hellenistic tiles and sarcophagi," Kizil told Anadolu Agency. Euromos ancient city, dating back to 5 BC, contains numerous interesting buildings, inluding the temple of Zeus Lepsinos from the Roman times during the reign of Roman emperor Hadrian between 117 and 138. The temple of Zeus Lespinos, dedicated to the Greek God, stood at the foothill, according to Turkish archaeological news website.  Excavations in Euromos were first carried out by Turkish archaeologists in the 70s. However, it has not yet completed. 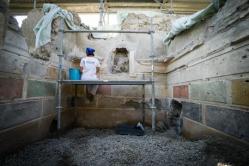 Pompéi -  Excavations at the Pompeii archaeological site have uncovered a new ancient Roman treasure - a home that has been baptised Domus 'Vintage'. The domus on the so-called street of balconies was rich in frescoes. "The domus had 'vintage' decoration in the first Pompeian style," Pompeii Director Massimo Osanna said as ANSA got a sneak preview. "The owner must have been wealthy and cultured, aware of the value of painting".