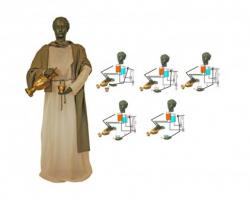 - This is the world’s first robot. The Automate Therapaenis (automatic maid) was the name of a technological miracle mentioned by Philo Byzantios during the 3rd c. BC. The maid was actually a life-sized doll holding an oenochoe ( wine-jug) with its one hand, having the other hand free and extended to receive a drinking vessel. The doll had a mechanism transferring wine and water from two pots interred in its body, to the jug she was holding, through tubes passing along her hand. Another set of tubes, going through her free hand and her body too, were there to enable pouring liquids by providing air. When somebody was placing a drinking vessel on her free hand, the wine (first) and the water (second) would come automatically from the wine-jug and they would stop once the drinking vessel was lifted. A replica of this mechanical ancient Greek miracle is to be found in the Museum of Ancient Greek Technology, in Katakolo Ileias, the Peloponnese, Greece.

ROYAUME UNI – Carmarthen – No homes should be built on land to the west of Carmarthen until further archaeological investigations into a potential historically important Stone Age site are carried out. Mike Ings, Dyfed Archaeological Trust senior planning archaeologist, said in a report to the council that a previous "desktop" study found historical importance — a Roman road also runs through the site. He added: "Significant prehistoric archaeology was uncovered. This comprised Bronze Age burial mounds, one of which is unusually well preserved for a lowland example and also the potential for the rare survival of earlier Neolithic (Stone Age) material. 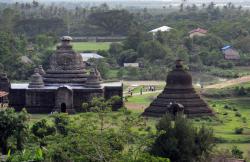 Mrauk-U - The Ministry of Culture’s Archeology Department and the National Museum of Myanmar reported on Wednesday that three pagodas and a repository of Buddhist scriptures had been flooded in the last week. The grounds of the palace in the center of Mrauk-U, the seat of the Arakanese kingdom between the 15th and 18th centuries, were also inundated during the recent deluge. U Sun Win, assistant director of the sub-regional Archeology Department, said that low-lying temples and buildings were vulnerable as a result of flood damage. “Some of the stone pagodas are cracked at the base,” he said. “We will need to do maintenance work because the foundation stones will have less strength than normal. [Importantly], we need to erect fences to protect the pagodas.” 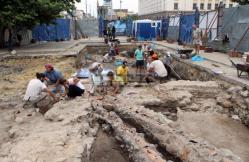 Sofia - During excavations in central Sofia's Sveta Nedelya Square, archaeologists have found one of the largest buildings dating from Roman times that has ever been unearthed in the territory of Bulgaria. This is presumably either the praetorium, or palace of Emperor Constantine the Great (reigned AD 306-312), or the thermae of Serdica, City Hall said in a press release, covering an inspection that Mayor Yordanka Fandakova carried out at the site of the research. The excavations are still at an early stage, but the ancient architectural ruins found shed new light on the urban development of central Serdica in the 2nd - 6th century AD). A huge-size building by the standards of the ancient city rose where the forum was presumably located. Peculiarities of the massive walls of the building suggest that it was used for a long period of time, undergoing various repairs and remodellings. Fragments of marble facing tiles and architectural details show that the building was lavishly decorated.
http://www.bta.bg/en/c/NW/id/1137691?

Cambuskenneth  - The 12th century ruins of the Augustinian Abbey at Cambuskenneth (central Scotland) are often overlooked for the more impressive remains at Stirling Castle and currently sit in a quiet, sleepy village cut-off from main motorway networks. Yet for centuries Cambuskenneth was at the heart of Scotland’s government, it held Robert The Bruce’s baggage train during the Battle of Bannockburn and hosted his first post-Bannockburn parliament.  It is also the final resting place of King James III. The Abbey is in a loop of the River Forth and as befitted its status it had its own road network and harbour, all of which fell into disuse following the reformation. A 17th century print by John Slezer shows the remains of a watergate, securing entry from the harbour to the Abbey. This harbour is now completely silted up and has been out of use for at least 200 years…what secrets does it hold?As part of the Inner Forth Landscape Project and in conjunction with GUARD Archaeology, Stirling Council’s Archaeologist Murray Cook plans to explore the harbour and the various river crossings used by the Abbots, Kings and Queens over the centuries.
http://www.pasthorizonspr.com/index.php/archives/08/2015/cambuskenneths-lost-harbour

ROYAUME UNI – Horley - The excavations at Horley's North West sector, agreed by Reigate and Banstead Borough Council in the project planning stage, have been going on for four weeks. Responding to a question about its progress by Horley councillor Alexander Horwood at last Thursday's full council meeting, leader Vic Broad said: "The works have revealed remains from a number of archaeological periods. "Most predominant is localised Iron Age and Romano-British settlement remains comprising a number of gullies representing former structures, along with pits and post holes representing outbuildings and refuse disposal. "Finds from the Iron Age Romano-British period include animal bone, pottery, a number of coins as well as other domestic finds such as quern stones." Evidence of later medieval activity has also been found on the site, including metalworking and processing, he said.