Kotsamalai - The Patali Srikhetra at Kotsamalai under Birmaharajpur sub-division in the district is yet to get a temple of the three divine siblings. The idols continue to be worshipped in a makeshift temple atop Trikut hill. Legend has it that the idols of the deities of Jagannath temple in Puri were kept hidden in the caves of Trikut for 144 years during the invasion of Muslim General Raktavahu. According to Madala Panzi, during the invasion of Odisha by Raktabahu in 4th century AD, the then ruler Shoven Dev secretly shifted the three idols from Puri temple to a secured place in far away Sonepur. The deities were kept underground near a ‘Peepal’ tree at a place called Gopali. After 144 years, another Hindu ruler Yayati Keshari retrieved and reinstalled the idols in Puri temple. When the fact came to light, a team of Archaeological Survey of India (ASI) and State Archaeology visited the spot and testified the linkage of Patali Srikhetra with Srikhetra and also found archaeological properties of pre-historic importance. Subsequently, a small temple was built atop the hill and the Patali Srikhetra Action Committee (PSAC) installed the idols of the Trinity, which the Puri temple administration had given them in 2011, after Bigraha puja. Puri Gajapati Divya Singhdeb had also visited the spot and called upon people to stop consumption of non-vegetarian food and liquor in the area. The Puri temple administration also decided to construct a Jagannath temple at Patali Srikhetra and sculptor Raghunath Mohapatra was roped in for the purpose.

Kuragala - Kuragala in Balangoda is the oldest archaeological site found so far in the Intermediate Zone of the country and as such the Department of Archaeology has taken all steps to protect the site , Director General of Archaeology Dr Senarath Dissanayake said. He further said that according to the radio-carbon dating done by the US institute using sophisticated technologies, the Kuragala site had five layers of human habitations from 16,000 to 6,000 years before the present age (BPA). "This is the oldest date for a site inhabited. This seconds the previous first which was found at Bellanbendipelessa. The Bellanbendipelessa was dated 13,000 years BPA", he added. The Department of Archaeology has conducted extensive excavations in the Kuragala site from April to December last year. The caves at the Kuragala site had been used as a Buddhist monastery during the period between 3rd Century BC to First Century AD, Dr Dissanayake said. Some of the caves had been inhabited by the humans in the pre-historic period. During the excavations, the archaeologists had found stone tools, fossilized bone fragments and a complete human skeleton which was later sent to the University of Oxford for DNA and other testing, Dr Dissanayake said, adding that the skeleton would be returned to Sri Lanka once the scientific testing is over. The other most striking discovery from the site was the evidence that humans lived in the Kuragala caves had close links with coastal areas. Among the items found were sea shells, shells of clams living in the sea, indicating that the humans who lived there during the prehistoric times had consumed them. The Department of Archaeology would conduct further excavations this year too to study the settlement patterns of the prehistoric man, Dr. Dissanayake said and called upon the public not to create religious issues based on these activities. 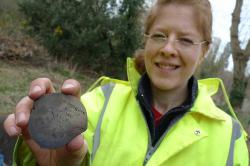 Grouville - The remains of a German labour camp should be preserved and open to the public to remember those who suffered in the Occupation, says an archaeologist who has uncovered its secrets. Dr Gilly Carr, a specialist in the Channel Islands in the Second World War, has been excavating a site on the edge of Grouville Marsh that once housed the camp Lager Wick, run by Organisation Todt, which was responsible for fortifying German-occupied countries. The ablutions block in the site is now to be preserved as a heritage site. It was one of 12 camps that housed more than 5,000 workers who turned Jersey into a fortress as part of Hitler’s Atlantic Wall defences.

INDE – Lyavigere - Four gold pendants, a gold coin and a gold armlet kept in a copper pot was found in a field at Lyavigere village in Barur Grama Panchayat of Sagar taluk on Thursday. According to the police, Lokesh, an agricultural labourer stumbled upon the pot when he was tilling land that belongs to one K.K. Babu of the same village. Mr. Babu informed the police about the find. Officials of the Revenue Department, who visited the village on Friday, have conducted an on-site inspection. They found a copper lamp at the same spot. The gold found weighs 150 gm and is worth Rs. 3.96 lakh. The coin and ornaments, said to belong to the period of Keladi dynasty, but is yet to be confirmed by officials of the Department of Archaeology. 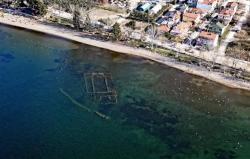 Iznik - The remains of a nearly 1,600-year-old basilica that was discovered at the beginning of last year under Lake İznik in the northwestern province of Bursa is now set to become an underwater museum. Archaeologists, historians and art historians estimate that the structure collapsed during an earthquake that occurred in the region in 740. They determined that it was built in hon-or of St. Neophytos, who was among the saints and devout Christians who were martyred during the time of Roman emperors Diocletian and Galerius, when bans and punishments against Christians were common. According to resources, Neophytos was a saint who was killed by Roman soldiers in A.D. 303, 10 years before the Edict of Milan, a proclamation that permanently established religious toleration for Christianity within the Roman Empire.Şahin said the church was established with his name in the place where he was killed. The date of the church construction was not precisely determined but it could have been built after 313, according to Şahin.“There is one more date, which is important for us. Most probably, it could have been built in 325 after the first council meeting in İznik. In any case, we think that the church was built in the 4th century or a further date. It is interesting that we have gravures from the Middle Ages depicting this killing. We see Neophytos being killed on the lake coast,” he said, adding that he was a beloved saint. According to ancient resources, Christians definitely stopped by İznik in the Middle Ages while making their pilgrimage to visit the church. “Rumor has it that people in İznik were asking for help from the body of Neophytos when they were in difficulty,” he said.
http://www.hurriyetdailynews.com/basilica-in-lake-iznik-to-become-underwater-museum-.aspx?pageID=238&nid=80640&NewsCatID=3 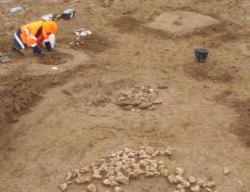 Waterloo - A 200-year old skeleton discovered beneath a parking lot at the Battle of Waterloo site has been identified as a German soldier. The remains are the first full skeleton to be recovered from the famous battlefield in Belgium. The soldier, 23-year old Friedrich Brandt, was a member of the King’s German Legion of British monarch George III, the Sunday Times reports. Brandt, who had curvature of the spine, known at the time as “hunchback,” was killed when a musket ball fired by Napoleon’s troops lodged in his ribs. Recent analysis revealed Brandt’s identity after his remains were unearthed by a mechanical digger at the site in 2012.  Brandt’s skeleton was found with 20 German and French coins. A box near the remains also bore the initials F.C.B., which proved a vital clue.

INDE - Sikandra -A 25-year-old woman was today found murdered on the pathway leading to the park from the entrance gate of Akbar's tomb in Sikandra here, police said. The Archaeological Survey of India (ASI) staff immediately informed the police which began investigations and the Sikandra police station sent the body for post mortem. SSP Rajesh Modak said investigations are on and the mobile calls details could perhaps help to know the identity of the diseased. She was stabbed with a knife in the neck and stomach.