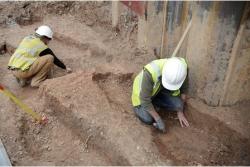 Plymouth - Work to exhume hundreds of 18th century bodies from the site of a student housing development is coming to a close. A team of archaeologists from Exeter are making a final site visit to the development before the skeletons are taken away for analysis. The bodies were found in 2007 after Bramwells Garage in Plymouth was demolished. In order for the planned 15-storey building to be built the bodies, belonging to British Navy sailors who all died at a naval hospital in Stonehouse, first have to be removed. is thought the bodies were buried from 1770 through to 1824 and the excavation of them has taken place in three phases, the first being in 2007. Mr Farnell said: "The key points of interest are the demographic of the population, as well as their age, sex, and what they ate. There's a lot of disease and things evident in the skeletons. "There's evidence of syphilis and those sorts of things related to their profession, and lots of injuries like broken bones, characteristic of sailors. Also evident is medical procedures, such as amputations. "Most of them had some kind of infection or injury, very much related to their lives and what they did." He added: "It's pretty unusual to do so many skeletons in one go and we don't normally excavate a large proportion of [a graveyard]. "They're all individual graves of Royal Navy sailors. They'd have been in the Royal Naval Hospital at Stonehouse and died of their injuries or disease and then buried in this graveyard. Their DNA will be studied to find out where they came from, as the Navy at that time took people from all over the place of different ethnicities."

Palmyre - Three ancient funerary towers in Palmyra, Syria, one dating to 103 A.D., have been destroyed by the Islamic State, Syria's antiquities chief said. Maamoun Abdul Karim said he received confirmation of their destruction, part of the Islamic State's campaign to destroy evidence of pre-Muslim religious life. Palmyra's two main temples in the UNESCO World Heritage Site complex, including the 2,000-year-old Temple of Bel, were blown up several days ago. The sandstone funerary towers, each several stories high, were located southwest of the Greco-Roman ruins of Palmyra, a city regarded as among the most prominent in the ancient world. The towers were in the Valley of the Tombs, a cemetery for rich families of the era. Each tower contained several sarcophagi for the remains of family members; among those destroyed was the Tower of Elahbel, built in 103 A.D.,which was four stories high and could contain, archeologists believe, up to 300 sarcophagi. Also lost was Kilot tower, built around 44 A.D., and Lamblichus, built in 83 A.D. 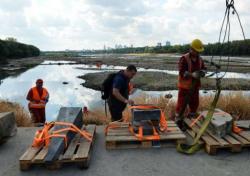 Vistule - Archeologists are having a field day in Poland's longest river, the Vistula, which because of a drought has hit a record low water level allowing them to uncover a treasure trove of ancient artifacts. "There are pieces of marble and stoneware and fragments of fountains, window sills, columns, concrete slabs, cannonballs," said Hubert Kowalski, a researcher at Warsaw University's archeological institute. "It's mainly fragments of carved stones that the Swedes tried to steal in the 17th century during their 1656 invasion," Kowalski told AFP. Other items to emerge from the Vistula this summer include pieces of bridges and boats, as well as ceramic objects dating as far back as 700 to 400 BC. They include obelisks and bases of columns that likely came from Warsaw's Kazimierz Palace, which was built in the 17th century and is today a Warsaw University building. The Vistula is the EU member's largest river, as well as its longest at more than 1,000 kilometres (600 miles), splitting the country in half and flowing into the Baltic Sea. 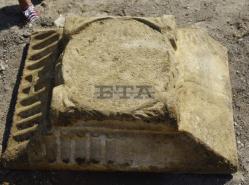 Abrit - Abrit Village, Northeastern Bulgaria, September 4 (BTA) - Archaeologists have discovered one of the largest early Christian crypts during excavations near the village of Abrit near Dobrich, Northeastern Bulgaria, Prof. Georgi Atanassov told journalists. Atanassov and Assoc. Prof. Valeri Yotov head the archaeological expedition.  The crypt was found on the territory of a bishop's basilica which archaeologists found last summer. The crypt, dated to the end of the 5th century, is unusually large at 3.80 metres by 2.50 m, and 2.50 m high. According to Atanassov, the dimensions indicate that it contained the remains of more saintly martyrs.  Archaeologists say the beautiful basilica is comparable to the largest Early Christian churches in Odessos, Histria and Tomis along the Black Sea coast. More than 1,000 unique marble details were found in it. Zaldapa was the largest late Roman and Byzantine fortified town in the interior of Dobrudja. It is considered as the local equivalent of Pompeii and Karel Skorpil (1859-1944) was among the first archaeologists to study it.
http://www.bta.bg/en/c/NW/id/1156739? 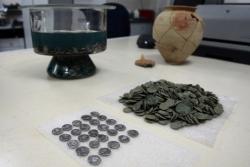 Sofia - A treasure of 2,976 silver Roman coins from the 1st-2nd century AD has been discovered byarchaeologists during the excavations of the ruins of the Ancient Thracian and Roman city of Serdica in the downtown of the Bulgarian capital Sofia. The silver coin treasure has been found hidden inside a ceramic vessel with a lid in the structuresfrom Ancient Serdica which are being excavated on the square near the St. Nedelya (“Holy Sunday) Cathedral and the Hotel Balkan (formerly the Sofia Sheraton) as part of the efforts for the further study of the Thracian and Roman city and its partial archaeological restoration. The coins in question were collected for a period of at least 100 years since the earliest ones are coinsof Roman Emperor Vespasian (69-79 AD), and the latest – coins of Emperor Commodus (r. 177/180-192 AD). There are also coins that feature almost all of the other Roman Emperors inbetween and some of theirwives, daughters, or sisters, from the Nerva-Antonine Dynasty (r. 96-192 AD) – including Emperor Nerva (r. 96 – 98 D), Emperor Trajan (r. 98-117 AD), Emperor Hadrian (r. 117-138 AD), Emperor Antonius Pius (r. 138-161 AD), as well as Vibia Sabina (wife of Emperor Hadrian), Faustina the Elder (wife of Emperor Antonius Pius), Faustina the Younger (daughter of Emperor Antonius Pius and wife of Emperor Marcus Aurelius), Bruttia Crispina (wife of Emperor Commodus), and Lucilla (daughter of Emperor Marcus Aurelius and elder sister of Emperor Commodus).