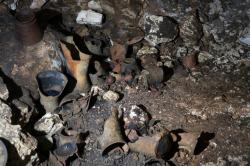 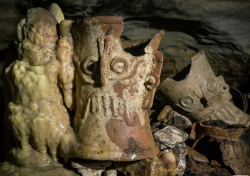 Chichen Itza - Archaeologists have discovered a cave filled with hundreds of artifacts beneath the ruins of the Mayan city of Chichen Itza in Mexico, the lead researcher on the project said Monday, calling the find "incredible." The massive cave is a "scientific treasure," Mexican archaeologist Guillermo de Anda told a news conference. He said it could help scientists better understand the origins, lives and beliefs of the residents of Chichen Itza, a stunning city of stone in the Yucatan peninsula that was founded sometime around 750 AD. The cave was found about two kilometers (1.2 miles) from the Temple of Kukulcan, the giant stepped pyramid that dominates the center of Chichen Itza. It sits about 24 meters (80 feet) underground, and contains multiple chambers connected by narrow passages -- often so narrow that researchers had to crawl or drag themselves through them, De Anda said. His team has explored about 460 meters of the cave so far, and does not know how far it stretches, he added. The relics found include seven incense burners shaped like the Mayan rain god Chaac, which researchers believe were offerings meant to bring rain. De Anda said locals had actually discovered the cave more than 50 years ago. But the archaeologist sent to explore the site at the time by the National Institute of Anthropology and History decided for unknown reasons to seal the entrance with stones, and filed only a brief report. De Anda had seen the report, but did not give it much thought -- until he happened upon the entrance to the cave last year while exploring another site nearby. "What we found there was incredible, and completely untouched," he said. The residents of Chichen Itza probably considered the cave "the bowels of the gods," he added. His team believes the largest incense burners date from around 700 to 1000 AD. The indigenous Mayas who inhabit the area today warned his team that a venomous coral snake guarded the site. And researchers did in fact find just such a specimen, which blocked their access to the cave for four days, De Anda said. At locals' behest, they performed a six-hour purification ritual before entering the cave. De Anda's team plans to continue exploring the cave. Rather than remove the artifacts they find, they will study them on site, he said.

CHINE - Guanzhuang  - The ruins of a bronzeware casting workshop dating back some 2,700 years were unearthed in central China's Henan Province, archaeologists announced. Furnaces, polishing stones, blowers used for blowing air into fireplaces, ladles that poured molten bronze into molds and their pieces were excavated at the ruins of Guanzhuang in Xingyang, the western part of the provincial capital Zhengzhou. Some 3,000 molds, including those to make musical instruments, weapons, chariots and horse devices, have been unearthed at the workshop covering 2,000 square meters. "Some molds are large and feature delicate decorative strips, indicating that the bronzeware users were high class," said Gao Xiangping, the excavation team leader from Zhengzhou University. The university, the Institute of cultural heritage and archaeological research in the city of Zhengzhou and Xingyang cultural heritage protection administration center jointly conducted the excavation starting in 2011. The ruins of the workshop, believed to be used from 770 B.C. to 650 B.C. revealed the bronzeware casting process including molding, casting and polishing during the Western and Eastern Zhou dynasties, said Gao. He also said the unearthed molds gradually changed in ornamentation, upgrading from a simple style to more complicated 3D decorative designs, which demonstrates the evolution of the artistic style during the period. Other bronzeware and earthenware workshops were previously excavated at the Guanzhuang ruins, which covers a total area of 1.3 million square meters. The multiple workshops discovered have proved that the Guanzhuang ruins may have been a town for production and storage of goods and supplies, according to Gao.

Wat Phnom - Buddha statues, ceramic tiles, and other artifacts made of sandstone and metal were uncovered last week during construction work on the property of the Electricity Authority of Cambodia. The site is located near Wat Phnom, a Buddhist temple first built in 1372 in Phnom Penh. “At this time, our experts still do not know when the archaeological artifacts were made,” said Chum Vuthy, director of Cambodia’s Fine Arts Department, “but it is likely to have been somewhere between the thirteenth and fourteenth centuries because that location was originally an old cave before the construction of Wat Phnom.”

Leith - Sea defences built to protect Scotland during the Napoleonic wars have been unearthed by a team preparing to create 400 waterfront homes. The former military fortress, used to protect Edinburgh during the war, was revealed for the first time in more than 150 years at the historic port of Leith.

Rome - Long the preserve of stray cats, the Largo di Torre Argentina will reopen to the public from 2021.The ancient square, the site where Julius Caesar was murdered, is to get a make-over courtesy of fashion house Bulgari, which plans to spend some €800,000 restoring the ruins to an accessible state.The sacred square once housed four Roman temples and was adjoined by the Theatre of Pompey, Rome's first permanent theatre and the spot where Caesar is believed to have been stabbed. Off-limits and overgrown, its archaeological remains stacked into piles, the area needs considerable work to make it accessible to the public, including securing the ruins, installing walkways and building public bathrooms. The restoration should be completed "in the second half of 2021", Mayor of Rome Virginia Raggi announced on Monday.